Is the honeymoon over for Russia and Turkey? 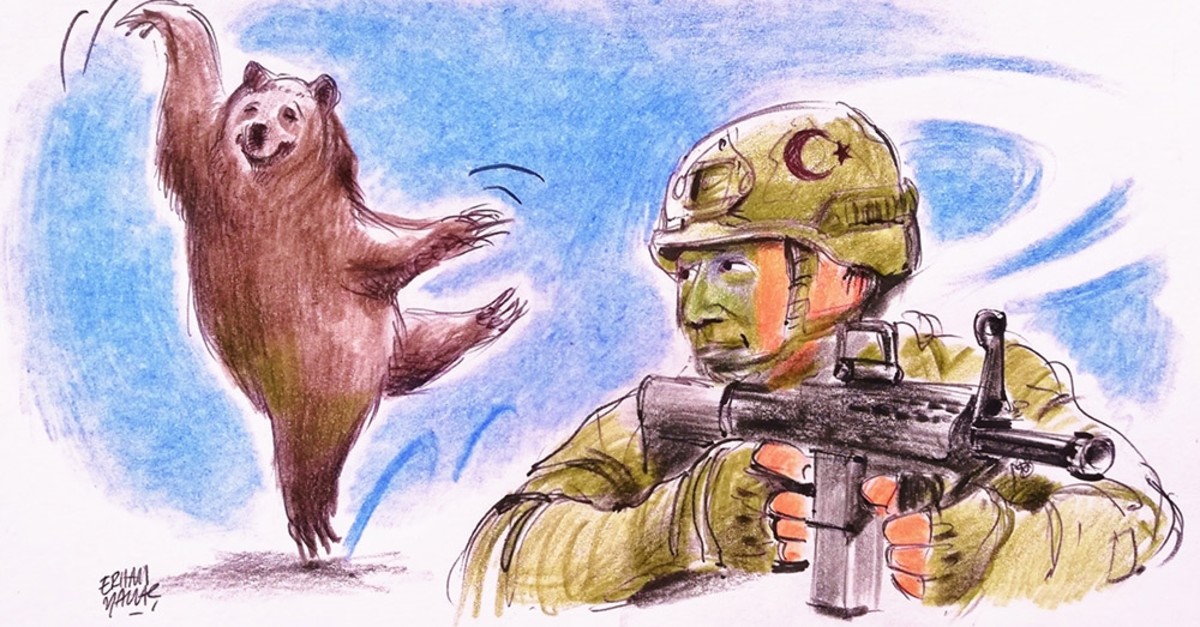 It is true President Recep Tayyip Erdoğan and Russian President Vladimir Putin have had an amenable relationship. Turkey and Russia are also both regional actors that share partnerships on many issues. The recent cooperation between the two countries is not as black and white as foreign affairs and alliances between countries were during the Cold War. To call this period of cooperation a "honeymoon," however, would be incorrect.

Ankara sees the new foreign policy dynamic as multilayered compartmentalization of its foreign policy. What this means is that countries do not take a holistic approach to foreign policy; instead, they continue to cooperate on issues on which they agree and to communicate concerning matters on which they have not found consensus. This new, de facto state has two important features. The first is that both Russia and Turkey are taking initiative as actors concerning regional issues. What this means is that, despite all their reservations, the two countries can sit at the same table rather than pawning off the issue to a far-off superpower or negotiating through neighboring countries as mediators. And now, what is happening in Idlib is an example of this. Over the past two weeks, Turkey has been alarmed by the deaths of 12 Turkish soldiers and one civilian in Idlib. Turkey and Russia are on the verge of a major crisis now that Syrian regime forces with Russian backing have captured Saraqib, penetrated further into Idlib and retaken the areas around the Turkish observation posts there. As much as both Putin and Erdoğan give tempered messages, the Russian delegation that came to Turkey on Feb. 7 left for Jordon without having been able to reach an agreement with their Turkish counterparts. There was no change in positions either when the Russian delegation returned on Feb. 10. Ankara insists that the Syrian regime adhere to the Sochi agreement and return to its previous positions by the end of February, as well as that the de-escalation zone be protected. The possible advance by Syrian regime forces would compromise the lives of millions of civilians and could lead to a human tragedy on par with what was experienced in eastern Ghouta. Ankara is calling for the de-escalation zone in Idlib to remain as a legitimate refuge as Turkey's concerns grow over border security and ongoing terror threats, as well as not being able to take in another possible flow of refugees fleeing the violence.

The Syrian regime seems determined to reassert control over Idlib. This would make sense for Assad, as the M4 and M5 highways that run through Idlib connect Latakia, Aleppo and Damascus. It would also be a death blow to the last remnants of the opposition holed up in its final bastion. With these facts on the ground, the Syrian regime continues its attacks to retake Idlib and advance north, violating the Sochi agreement by bombing civilians around the clock.

And what is Moscow's position on all of this? A clever silence. While the most recent situation on the ground is clearly pulling Turkey and the Syrian regime into a hot conflict, Russia is playing its cards in favor of Assad. Moscow remains silent on the Syrian regime forces' advance in Idlib while also accusing Ankara of failing to fulfill its requirements as dictated by the Sochi agreement. The steps Russia has taken to change the situation on the ground, as one of the guarantors of the agreement, has caused much public anger and disappointment in Turkey. The Turkish public has accepted Russia as a reliable partner in a short time. While still taking baby steps in this relationship, injuring the trust that has been engendered could lead to more damage. Ankara expects Russia to bear in mind its overall relationship with Turkey when acting and to do so more responsibly. Idlib is by no means the only crisis between Russia and Turkey, just as Syria is not their only area of cooperation. Ankara and Moscow also have conflicts of interest in Libya concerning Libyan National Army (LNA) putschist commander Khalifa Haftar. Whereas Ankara supports the U.N.-recognized, interim Government of National Accord (GNA) in Libya, Moscow has been supporting Haftar on the ground.

For the time being, it seems the Syrian regime's targeting of Turkish positions in Idlib and Turkey and Russia's positions in Libya will create serious crises between the two countries. Now, though, it is undeniable that Russian-Turkish relations will not deteriorate as easily as they did in 2015, when Turkey downed a Russian warplane over its territory. Because, outside areas of conflict, however, Russia and Turkey navigate complex fields of relations and cooperation, including energy and defense cooperation. Erdoğan and Putin signed an intergovernmental agreement in May 2010 on the Akkuyu Nuclear Power Plant, which will consist of four VVER-1200 power units with a total installed capacity of 4,800 megawatts. The TurkStream pipeline, which will deliver natural gas from Anapa in Russia to Europe through an underwater pipeline via the Black Sea and through Turkey, consists of two pipelines that will have a total supply capacity of 31.5 billion cubic meters per year, corresponding to the annual energy demand of 15 million households. Ankara also signed a deal with Moscow in December 2017 to purchase S-400 missile systems – Russia's most advanced long-range, anti-aircraft missile system – in what has become long-term defense cooperation between the two countries. Ankara's decision to buy a Russian product as opposed to that of a fellow NATO ally created crises with the U.S., which in turn expelled Turkey from the F-35 fighter jet program. Putting all these on the table, it seems nothing is black and white or will make or break the relationship. The construction and operation of the Akkuyu Nuclear Power Plant, the TurkStream natural gas pipeline project and Ankara's purchase of Russian S-400 missile systems are important aspects of long-term cooperation between the two countries, while Idlib and Libya will remain conflicting issues. This is the trend of the "new geopolitics" in the region and the new reality of regional actors that will push countries to build new aspects for a common future.

So, pursuing a strategic alliance requires taking conscious steps. No alliance is self-perpetuating, including Russia-Turkey relations. This friendship should not be taken for granted. It requires constant maintenance, should be respected mutually and be supported by official efforts. It has to be taken into consideration on every level through mutual understanding and trust that must be reinforced amid crises; otherwise, the amicable relations could easily become vulnerable.