Which coalition formula is correct? 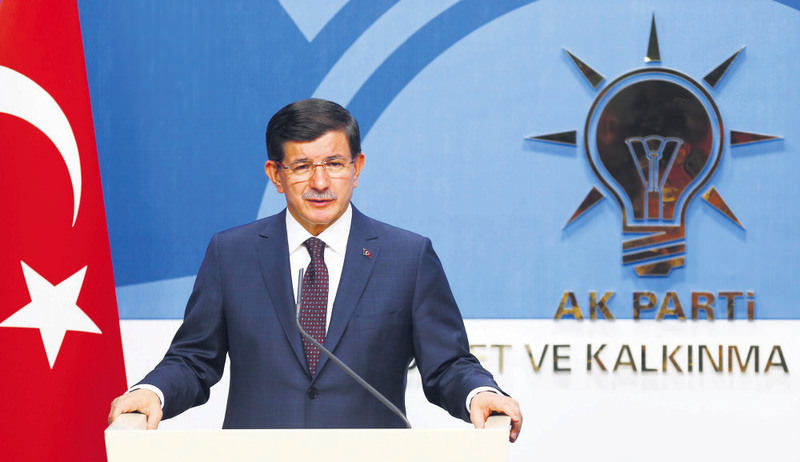 Turkey's Prime Minister Ahmet Davutou011flu speaks during a news conference at AK Party headquarters in Ankara after his visit of main opposition party CHP.
by Nagehan Alçı Jul 15, 2015 12:00 am

Coalition talks have officially started as Davutoğlu paid his first visit to the main opposition CHP. The nature of these talks will shape the landscape of future politics

A true beginning was made on Monday to form a coalition government with coalition talks starting after the Parliament speaker was elected and the Bureau of the Assembly was formed. As expected, President Recep Tayyip Erdoğan assigned the task of forming a government to Prime Minister Ahmet Davutoğlu, the chairman of the Justice and Development Party (AK Party), which came in first in the parliamentary elections. Davutoğlu has already started to apply to the leaders of all parties. After visiting the Republican People's Party (CHP) he will hold talks with the leaders of the Nationalist Movement Party (MHP) and the Peoples' Democratic Party (HDP), an order that he set in accordance with the vote share each party received. The first round of talks will mainly concern setting a general framework and the picture will become clearer in the second round. Well, what is the situation? Which coalition possibility is stronger and more beneficial for Turkey?

Leaving aside the possibility of early elections, which I think is still a very strong possibility, there are two alternatives available. The first is an AK Party-CHP coalition and the second is an AK Party-MHP coalition. Had things gone normally, a coalition between the AK Party and HDP would be possible and even the most expected option, as the two parties carried out the reconciliation process in unison. However, an AK Party-HDP coalition is not on the table as an alternative. This is because the HDP positioned itself against the reconciliation process and against the AK Party as a part of its election strategy in return for which the AK Party used strong language against the HDP. Moreover, the HDP practically joined hands with the CHP and the MHP to overthrow the AK Party's one-party government and the PKK failed to put any distance between itself and violent discourse. This is actually very sad because the HDP, which made the most of the reconciliation process, was proceeding on its way to becoming a visible and respected actor not only in the region, but also in the whole country for the first time. If the HDP had internalized the concept of "Türkiyelilik" - Turkey-ness or, being from Turkey - a synergy between the HDP and the AK Party bases, which yearn for the "New Turkey," would emerge, as it should have.

Now, however, we have two options, the actors of which are indeed the representatives of the "old Turkey" and the status quo. Both the CHP and the MHP have always been in a struggle to prevent the changing mentality from taking hold and the steps that were taken during the AK Party government. The CHP functioned like an irritating pebble in a shoe while religious segments, which were ostracized by the Republic for years, were liberalizing and the MHP played the same role while Kurds were liberalizing. There is no other option available and we need to look at which party the AK Party will proceed with on its way with less damage or with relatively little slowdown. An AK Party-MHP coalition will inevitably be a rightist and conservative one that will further direct the Kurdish vote lost by the AK Party toward the HDP. Kurds, who have begun to feel as equal citizens, will once again be excluded from the center and government at a time when the Syrian Kurdish Democratic Union Party (PYD) is gaining so much strength and is growing into a de facto political entity with the U.S.'s support at Turkey's doorstep in Syria. Apart from all this, I think the MHP is very masculine, awkward and outdated. The AK Party has reached these days by adopting a forward-looking perspective, caring about women and has carried out the transformation. That is why the MHP will bring down the AK Party.

The partnership with the CHP has major challenges as well. First and foremost, the AK Party has always fought the concepts of secularism, statism and neo-nationalism that are represented by the CHP. Furthermore, the two parties' bases are diametrically opposed to each other. As a party that has been longing for power for years and claims to have changed, being a partner in the government will give the CHP an opportunity to prove this claim and come to power. Additionally, it will allow both parties to learn the culture of reconciliation by smoothing themselves. Such a coalition will benefit the AK Party in the eyes of the West, which accuses the AK Party and Erdoğan of being authoritarian and undermining democracy -accusations that are mainly directed by the CHP bloc. Now, the formation of a government together will completely remove such accusations and the AK Party's demonic image in the eyes of the West. This will come true if insistences, revanchist feelings and personal obsessions can be cast aside. If not, there will emerge a political landscape that is not different from the contentious coalition periods of the 1990s. I guess an early election will be resorted to, instead of such a possibility.
RELATED TOPICS