A call to world leaders: Let's rally in Ankara 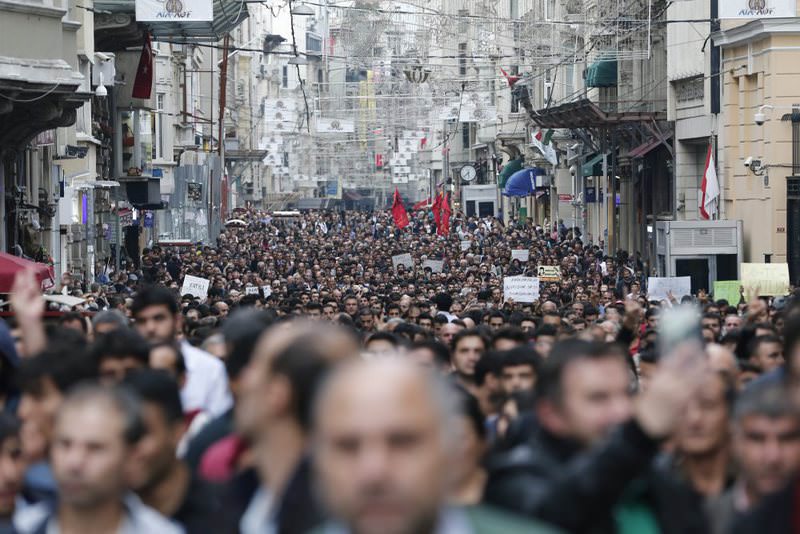 Protestors shout slogans against violence as they gather in reaction to the terrorist attacks in Ankara.
by Nagehan Alçı
Oct 13, 2015 12:00 am

World leaders, similar to the historic rally organized after the Charlie Hebdo massacre, should this time gather in Ankara to show that they are sincere in their stand against terror of all kinds

The two suicide bombs that exploded on Saturday morning in Ankara revealed that a big tangle of terror has fallen on the country and we are now confronted with an immense provocation. Although no tangible evidence or data has been obtained yet regarding this horrendous attack, which has passed into history as the deadliest assault modern Turkey has faced, experts stress the possibility that the assault might have been organized by the Islamic State of Iraq and al-Sham (ISIS). It is highly probable for ISIS to conduct such an assault due to its character, methods and structure. But we do not know yet whether some other foreign intelligence units could have been involved.As for the role it has undertaken and its position in recent years, Turkey has been standing in a position that is difficult to handle. On one hand, it tries to avoid various conflicts and threats nearby the country, including Syrian leader Bashar Assad, ISIS and various terrorist organizations, and on the other hand, it tries to pursue responsible policies and become an active member in the front fighting terrorist groups.

ISIS might have carried out the attack both to avenge its clashes with the Democratic Union Party (PYD) and to intimidate Turkey after Ankara joined the international coalition fighting the terrorist organization. Regardless of who committed the assault, we are confronted with a serious threat of terror on a global scale.

Messages of support and solidarity have been pouring from all around the world, including the U.K., Germany, U.S., Russia and France. Leaders are contacting President Recep Tayyip Erdoğan and Prime Minister Ahmet Davutoğlu to offer their condolences.

This deadly terror attack reminded me of the commemoration ceremony that was organized following the Charlie Hebdo massacre in Paris. After the assault that left 17 dead, 50 world leaders, including Davutoğlu, headed to Paris and marched in a historic rally to defy terrorism. Such a rally could also be organized in Ankara.

I think it would be to the point in many respects if the esteemed president or prime minister calls on world leaders to gather in Ankara to stand against terror. With this, it could be tested how sincere the West is in its reaction and support, above all. Secondly, it would be a good answer to the circles trying to charge the state with terror and expecting political gains from it. Thirdly, with the help of world leaders, a strong message would be given to those trying to spread the nonsensical argument that Turkey aids and abets ISIS. And last but not the least, relations would be revived and a strong message would be issued to the entire world.

Just imagine if all world leaders, including from the U.S., Germany, U.K., Russia and France, saying that they side with Turkey against terror, meeting at Sıhhiye Square where the massacre occurred. I think the West, which has been struggling against the immigrant crisis and, unfortunately, realized the gravity of the issue only after they were threatened by it, would like to be involved in such a picture.
Last Update: Oct 13, 2015 1:57 am