What will change in the new era? 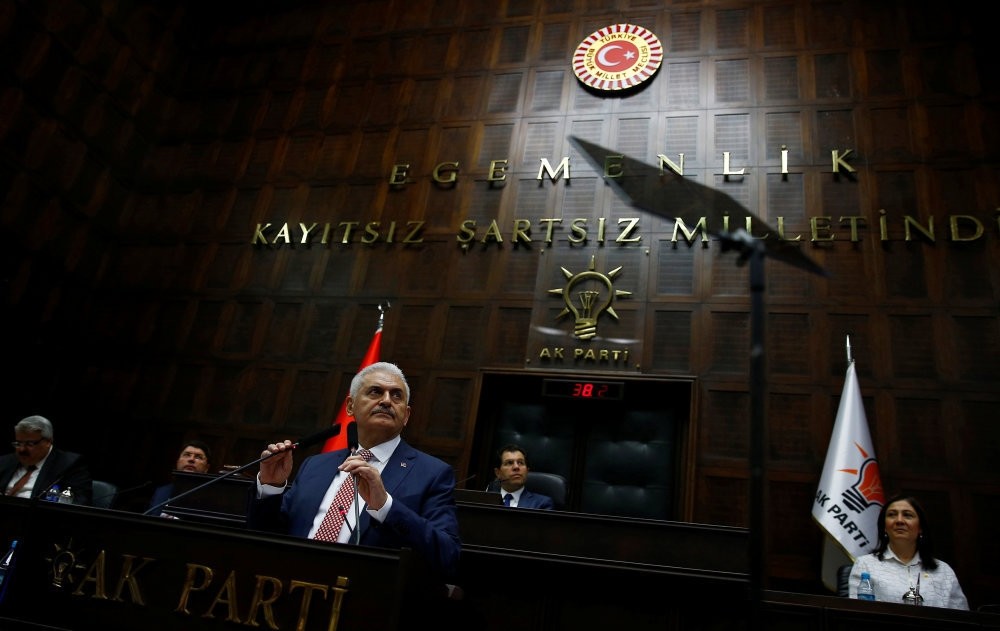 A reform era for Turkey: Yıldırım, who has now taken over from Davutoğlu as prime minister, has a new constitution based on a presidential system at the center of his platform

The Justice and Development Party (AK Party) entered a new period after Sunday's convention. Ahmet Davutoğlu, who resigned as prime minister and AK Party chairman, has been succeeded by Binali Yıldırım, who has served as transportation, maritime affairs and communications minister since the AK Party came to power in 2003.

The convention was organized very well and filled with a very enthusiastic crowd. When I entered the convention hall, the slogan: "Continuing on the sacred march," on giant banners aroused my attention. President Recep Tayyip Erdoğan's portrait was placed between those of former Prime Minister Davutoğlu and Yıldırım. Although Erdoğan was not physically present at the convention, his presence and leadership dominated the hall, body and soul. Indeed, this is what distinguishes the AK Party from other parties. It has a very influential, natural leader whose presence does not allow any rupture in the party irrespective of how many major changes it undergoes. As such, the AK Party proceeds on its way smoothly.

Davutoğlu worked hard during his time as prime minister for 20 months and made a good impression on politics with his gentle farewell. However, his term was based on a logic that set Turkey's presidency and prime ministry as two separate powers, leading to some problems stemming from the duality in administration. Erdoğan and Davutoğlu's different approaches to some important issues and problems created trouble between their teams for a while. Turkey has a new situation in which the president is elected through popular vote. Although a president who is elected through this way formally seems neutral, it is impossible for him to be a neutral president as if he does not have ties to any political party. Therefore, we need to think about the president and prime minister's positions in light of new codes.

Erdoğan is a president who is the natural leader of the AK Party and has a strong base in society. So Turkey's system can progress if the prime minister works in harmony with him as such a president. However, the parliamentary system is still in place and constitutes the basis of many problems in the country. During Yıldırım's time as prime minister, the AK Party government will firstly try to make slight amendments to the Constitution and switch to a system in which the president is a member of a political party. Certainly, this will be an intermediate, makeshift solution.

Erdoğan's main objective and that of his party is to issue a new constitution that is based on a presidential system. The current parliamentary arithmetic, however, does not allow this. Also, a presidential system must be well explained to the public. More precisely, Turkey needs to create an atmosphere to discuss what kind of presidential system it requires to consolidate democracy and fundamental rights. Unfortunately, this is not possible at the moment as opposition parties raise objections to a new system and want to continue the current one.

So what will be the basic differences between Davutoğlu and Yıldırım's terms? First, they have different profiles. Davutoğlu is an academic who always reflected this feature on politics. He is a romantic politician whose vision has shaped Turkey's foreign policy since 2009. Although this vision was essentially correct, its predictions about Syria did not come true and unfortunately did not come to be, as Syria's cruel dictator, Bashar Assad, did not withdraw. Turkey will move from a romantic, idealist path to a realist one in foreign policy in the new era. To this end, it might revive its old alliances and reconcile with the West.

Yıldırım is an engineer who is known for his actions and developmental efforts. There was the construction of roads, bridges and giant projects when he served as minister. Now he wants to focus on growth. He takes risks and aims to carry out mega projects, including the Kanal Istanbul, to curb Turkey's current slowdown, which it has experienced since the outbreak of Gezi Park protests in 2013. Obviously, we will see a prime minister who talks less and tries to realize many projects simultaneously, as well as a Turkey that focuses on increasing its growth in the upcoming period.
Last Update: May 25, 2016 2:25 am
RELATED TOPICS