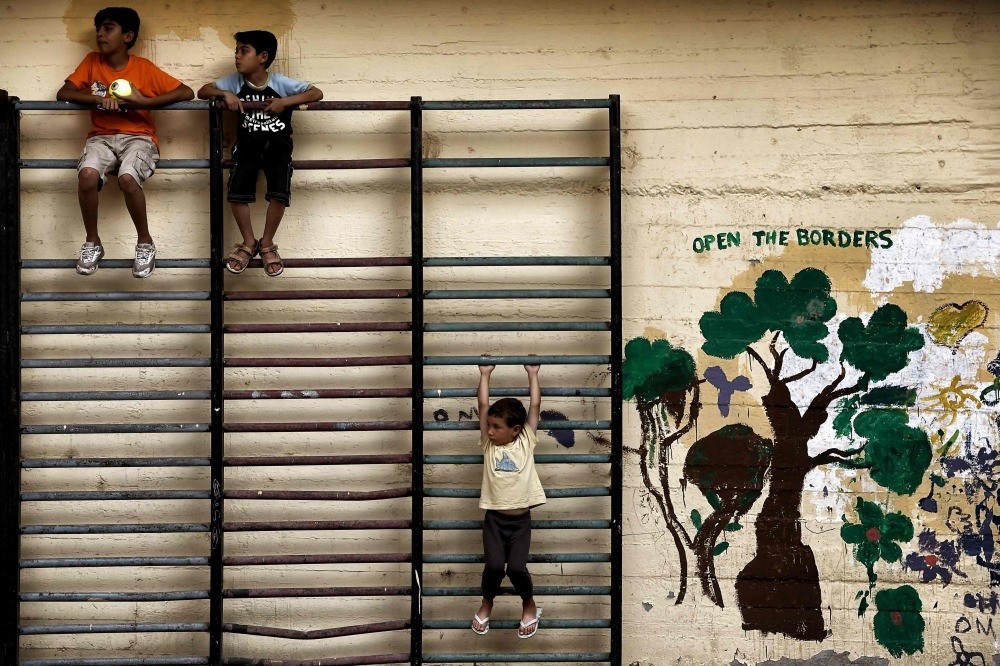 Children playing in the courtyard of an abandoned school used by volunteers for hosting Syrian and Afghan refugees in Athens, July 1, 2016.
by Nagehan Alçı Jul 13, 2016 12:00 am

Granting citizenship to Syrians who pass security screenings and have stayed in Turkey for at least five years, telling them that this is their land, too, indicates a great deal of self-confidence and humanity

President Recep Tayyip Erdoğan's recent announcement to grant Turkish citizenship to Syrian refugees has made strong reverberations worldwide, particularly in Europe. However, the reaction of some groups in Turkey and Europe is driven by a reflex that can be categorized as part of a radical, right-wing stance. Explicit discrimination is showcased in this context. Such disgraceful reactions, which are embodied in the slogan: "We don't want Syrians," are reminiscent of neo-Nazi reactions to Turkish-Germans.

In Europe, a feeling of shame is now prevalent since EU hypocrisy was revealed after it turned its back on thousands of refugees by contradicting the values it seemingly cherishes like humanism and human rights. Due to Turkey, which opened its gates to refugees and announced to grant citizenship to them, Europe is trying to come up with excuses for its rejectionist attitude. These excuses have their roots in fascist discourse in Europe such as security threats, unemployment rates and so on.

However, granting citizenship to Syrians will be conducted with a series of principles. Of course, Turkey does not intend to embrace or foment terrorism. Then what lies on the basis of the citizenship issue?

Turkey is a country founded on the heritage of the Ottoman Empire, which means it has a common past and historical heritage with a major part of Syria and the Middle East. Erdoğan has acted by feeling the responsibility of those ties and acted accordingly since the beginning of the Syrian civil war. And now, the president wants to embrace the Syrian refugees who want to permanently stay in Turkey and want to produce, contribute and create values for Turkey. The U.S. came to prominence thanks to immigrants. With the energy fueled by millions who could not find what they sought in their own countries, the U.S. turned into the greatest country in the world. Why would we not give such an opportunity to the Syrians who headed to our country in order to survive and keep their hopes alive?

It is argued that our national income will decline and unemployment rates will climb if Syrians become Turkish citizens. This is not true. Such arguments contradict the basic principles of liberal economy. A new labor force means more energy, more production and more dynamism. Besides, citizenship will not be granted to every Syrian refugee. There are certain criteria for citizenship, which must be opened to discussion.

I think the only criterion must be personal records. It must be meticulously investigated if applicants have any ties to terrorism or have been involved in a crime in their own country. Citizenship must only be granted to those whose records are proven to be clean. Conditions like language competence must not be stipulated. Today, in New York's Chinatown, there is a part of the Chinese population that does not speak English, but they are still New Yorkers despite that. This cosmopolitanism is the very dimension that composes New York.

In Turkey, some 2.75 million registered Syrians are currently living in various cities. With the unregistered ones, their overall number goes up to 4 million. However, those registered in Turkey do not have refugee status since only those coming from European countries are given refugee status as part of the implementation of the Geneva Convention. After a regulation passed on Oct. 22, 2014, Syrian refugees that came to Turkey were granted temporary protection and had the opportunity to benefit from social services and be employed. However, having a residence permit requires a different procedure.

Now, granting citizenship to Syrians who pass the security screenings and have stayed in Turkey for at least five years, telling them that this is their land, too, indicates a great deal of self-confidence and humanity. By means of this, new and beneficial energy will rise for as long as we manage to refute the claims of fascists who cast a shadow on this development.
RELATED TOPICS