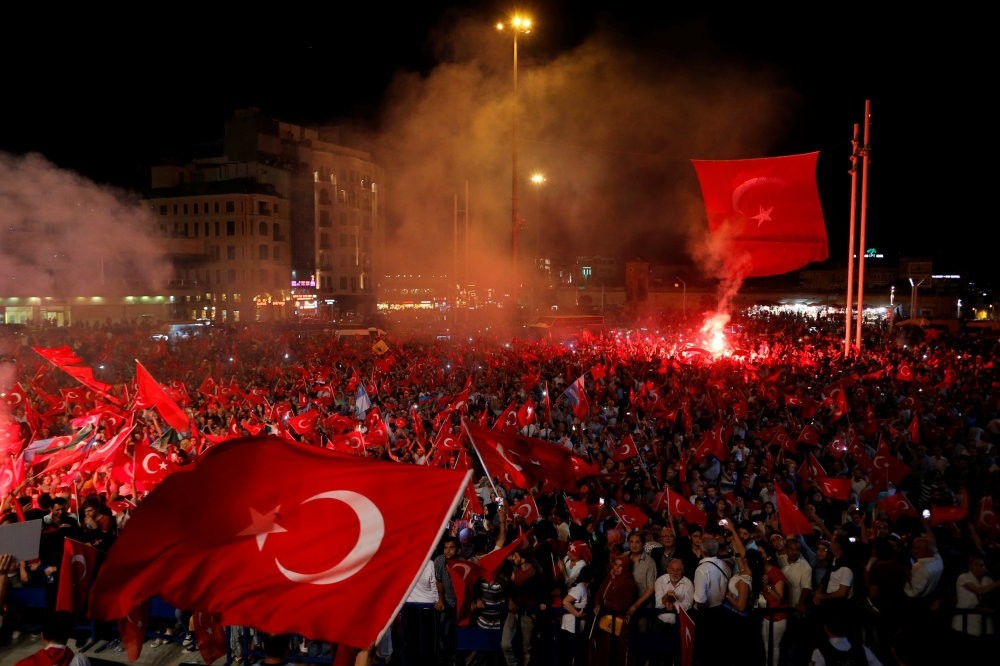 Dear Western friends, I am writing this article for you. As far as I can see, what is happening in Turkey is not properly reflected in the Western media, so I would like to tell you what exactly happened on the night of July 15 and the morning after, and depict what everyone has gone through regardless of their age or political views.

It was an ordinary Friday evening and thousands of people were outside, the streets of Istanbul and Ankara were crowded, and the traffic was heavy. At around 10.30 p.m., some strange indications started to come out. Armed soldiers blocked traffic on both of Istanbul's bridges across the Bosporus. In Ankara, critical spots including the Presidential Palace and Parliament were surrounded by tanks. Living under the constant threat of DAESH and the PKK, we first thought it was another terror alarm. However, the government did not issue a statement for a while. Afterward, jets began swarming in the air. F-16 jets and Sikorsky helicopters started to fly over Istanbul and Ankara ceaselessly. Within an hour, we found ourselves in the midst of a war.

After a while, Prime Minister Binali Yıldırım said at a live broadcast that this is a coup attempt. From that moment, a series of unbelievable developments that went beyond even Hollywood movies took place. We learned that the coup attempters with helicopters targeted the hotel where President Recep Tayyip Erdoğan was staying - they were about to attack with bombs and heavy weapons, and the president left the hotel hastily. Erdoğan made an announcement on a live broadcast through FaceTime, calling people to take to the streets and resist the coup attempt. The state-run Turkish Radio and Television Corporation (TRT) was raided by the militants and a newswoman was made to read the declaration of coup by force of arms. The coup attempters also raided the offices of CNN Türk station and the Hürriyet daily afterward.

Meanwhile, a series of bombings were heard in Ankara. In Istanbul, we were hearing the constant noise of jets flying overhead. Parliament and the Presidential Palace were bombed. Special operations teams were also bombed, leaving many police officers dead. On top of that, we started to hear news that the coup makers opened fire on unarmed people in the streets. Everywhere was a blood bath, but despite that, masses of people poured into the streets, taking courage from Erdoğan's call. They stood against tanks. A friend of mine was trying to cross the bridge blocked by tanks while we were talking on the phone, then through the line I heard helicopters opening fire on the crowd, we continued our conversation after my friend took shelter under a car. It turned out that some 80 young men from Kuleli Military High School, which is located in Istanbul's Çengelköy neighborhood where I also live, joined the coup attempt. While we were struggling against the attacks on the crowd, they raided the police outpost there and then clashes followed. They returned to Kuleli Military High School and opened fire from the windows. Unfortunately, many civilians lost their lives during the attack. Imagine if 1 percent of what happened here took place in the U.S. Imagine what they would do the next day as a precaution.

This night of nightmares emerged into the daylight thanks to the brave people who fought against the coup soldiers to prevent a tyrannical military dictatorship, and thanks to Erdoğan who managed to stay calm and called people to take to the streets. For the first time in a long time, everyone united against a threat, from the opposition parties to media outlets. No one but Gülenists sided with the coup.

When I look at some articles published in Western media outlets regarding this incident, including the editorial published in The New York Times on July 18, I wonder what exactly they are depicting, since their narratives have no relation to what we have gone through. They behave as if the coup plotters do not exist and Erdoğan must be blamed for everything. It seems like there is a race to prove Fethullah Gülen's innocence.

Dear friends, everyone living in Turkey already knew that the Gülenist Terror Organization (FETÖ) has some significant cliques in the Turkish Armed Forces (TSK), especially in the Gendarme and Air Force. Many critical sources from Ankara have verified that. I would like to add a personal anecdote. My husband, Rasim Ozan Kütahyalı, who is a columnist at Sabah, wrote on March 27 that about 50 percent of F-16 pilots are Gülenists. The General Staff answered this claim with a harsh notice and called him to their headquarters for questioning with the code "urgent." If only they interrogated their own officers instead of him, they might have prevented the F-16s that terrorized everyone on the night of July 15.

You can find some of Erdoğan's remarks strict or authoritarian, but do not let these thoughts make you ignore the nightmare Turkey went through last weekend. Gülenists attacked the people and the state by means of the network they formed within the military and through use of arms. They have no other route in life but the words of Gülen, whom they regard as a messiah. This is not any different from the mental state of militants carrying out suicide bombings for DAESH. Turkey was fighting many inner threats while struggling against DAESH from outside. You should contribute to the fight of this country, which is a NATO member and has strategic importance. Your contribution would not pose any barrier to your criticism of Erdoğan.