What happens if US returns? 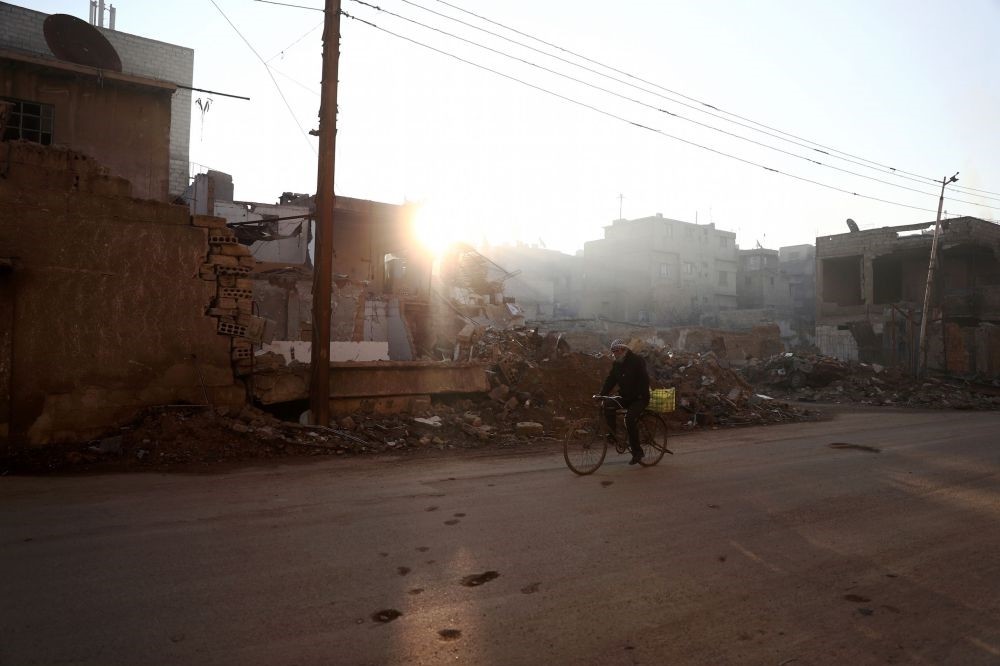 A Syrian man riding a bicycle in the moderate opposition-held town of Douma on the eastern outskirts of the capital Damascus, Jan. 30.
by Nagehan Alçı Feb 01, 2017 12:00 am

If Trump wants a stronger U.S. in the Middle East, he should align with Turkey and stand against the Kurdish terrorists in the region to gain its support

With Donald Trump taking over the U.S. presidency, many inextricable problems have already begun arising. Trump's hardline anti-Muslim rhetoric, his policy of closing the U.S.'s doors to citizens from seven Muslim counties and Syrian refugees, and an amendment of the extradition policy might lead to the awakening of the Islamophobic policies that have been ongoing in the U.S. since the 9/11 attacks. Trump managed to make a great show of saying what Muslims have not noticed for years, something that could be the antidote to Islamophobia. Even Sunday's developments alone could prove this prediction to be correct.

Many articles about Trump's steps have and could be written, but I would like to focus on what the U.S.'s changing policy on Syria means and what it could change for Turkey. Trump could be accused of being extremely hawkish and intervening against Turkey's interests to the same extent that the Obama administration's policy on Syria was accused of keeping its nose clean. Of course, it is too early to say anything definite yet. President Recep Tayyip Erdoğan and Trump have not come together yet and the U.S. has not made its policy on Syria clear. However, if not properly guided, Trump might act quickly and unknowingly in an attempt to make up for lost time.

The new U.S. president worried Ankara with the question of whether the safe zone that he vowed to establish in Syria could include the Democratic Union Party (PYD)-held region. Now, he plans to change strategy in the fight against Daesh. The news that infiltrated U.S. media, suggesting that the Trump administration wants to deploy American troops and helicopters in the area as part of the Raqqa operation, indicates that the U.S. has a plan to return to the Middle East.

What matters most, however, is the question of how the U.S. will return. Turkey has constantly proposed the U.S. establish a terrorist-free safe zone in northern Syria over the past five years, but the U.S. did not respond to the proposal. The call by Ankara aimed to mop up PYD elements. Does Trump mean the same thing while proposing to establish a safe zone now? I do not think so, as the U.S. still uses the PYD as a ground force. Moreover, as Hürriyet daily's foreign policy writer Verda Özer wrote on Sunday, the question of against who the safe zone will be established might pose problems for both the U.S. and Russia. This is because the U.S., Russia and Turkey all differ on who they want cleared out of the region. In other words, the issue of a safe zone does not have the same meaning as it had five years ago.

On the other hand, some of Trump's messages push us to ask whether he aims for a coalition including Turkey and the PYD in the anti-Daesh fight. Obviously, the Trump administration wants to work with Ankara again. It says that Turkey's rapport with Russia stemmed from the absence of the U.S. in the region, vowing that it will re-ensure the old balance by returning to the region. It also states that there is a need to develop an integrated strategy with Syrian Kurds.

While Trump is making plans to bring together Turkey and the PYD, Ankara harshly rejects this approach. It seems this atmosphere will continue until the Erdoğan-Trump meeting. I think Erdoğan will be able to convince Trump on the PYD issue in that meeting. Certainly, the PYD is not a power that can be compared to Turkey. The most important goal for a U.S. that aims to return to the region will be to receive the support of Turkey, the greatest power in the region.
Last Update: Feb 01, 2017 1:23 am
RELATED TOPICS