Can common sense take over Europe? 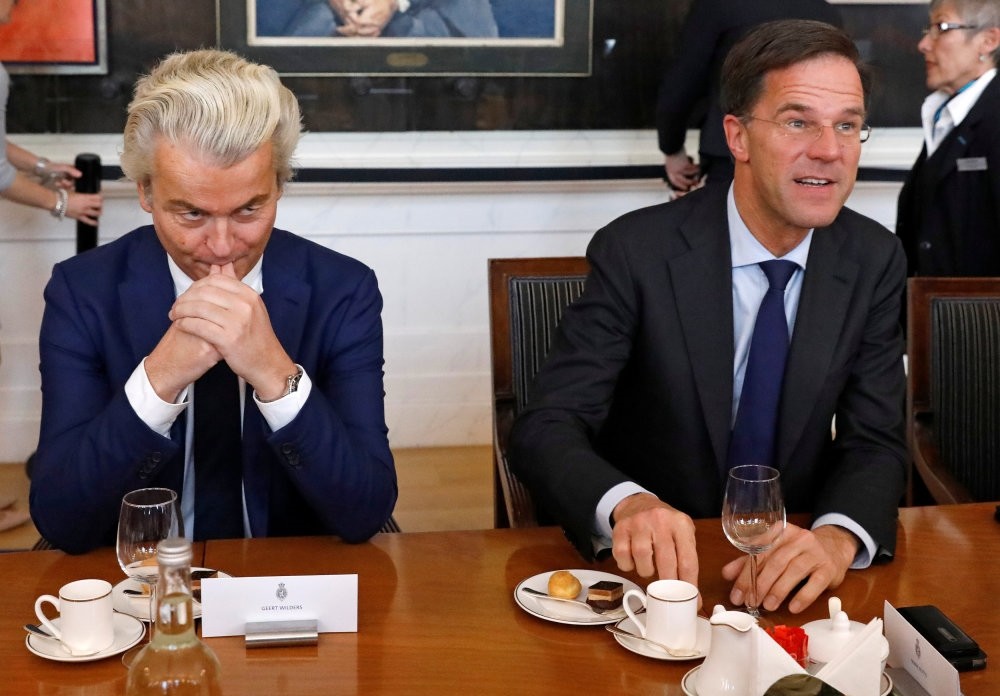 Prime Minister Mark Rutte (R) and far right politician Geert Wilders taking part in a meeting in the Dutch Parliament after the general election in The Hague, Netherlands, March 16.
by Nagehan Alçı Mar 23, 2017 12:00 am

The democratic circles of Europe are likely to soon say ‘stop' to the current rising trend of populism, far right and xenophobia in European countries

The Dutch general elections, which became prominent on the world agenda due to the diplomatic crisis between the Netherlands and Turkey, were held on March 15. Incumbent Prime Minister Mark Rutte and his right-wing liberal party retained their positions as the first party and have embarked on forming a new coalition. Although Rutte's victory was celebrated as a success against the racist Geert Wilders, Wilders's party still increased its vote share by four points compared to the 2012 election, proving that the far right continues its dangerous ascent.

Rutte and the Dutch police treated Turkish ministers and citizens like vandals by failing to comply with any kind of diplomatic practices, manners or courtesy, and they tried to rationalize their unacceptable actions by arguing they were blocking Wilders. However, their disgraceful acts will go down in the history of Europe as a black mark. Taking the far right as a reference point to rationalize such behavior is even more pathetic since it indicates a gesture of submission. It is also an insult to the European democrat electorate. The base of Rutte's liberal party must be disturbed by the recent stances the party has taken.

Since the current European zeitgeist marginalizes President Recep Tayyip Erdoğan's Turkey and labels the new Turkey's steps as absolute errors, no dissident voice has so far been raised against the systematic insults targeting Erdoğan in the Western media, the violation of Turkish ministers' freedom of expression and the violence inflicted by the Dutch police. In my opinion, peer pressure in Europe has a major role in keeping this silence. Recently, I had a talk with Martin Lejeune, who is a freelance journalist based in Germany and the only journalist in Europe supporting Erdoğan. He draws a major rebuff for this reason. His critical approach toward Israel also forms a stance that is hard to maintain in Germany. Lejeune told me that he is constantly subjected to verbal harassment in Germany, adding that supporting Erdoğan has some heavy costs in Europe.

For the time being, I think democrat voices in Europe will remain silent due to this prevailing atmosphere. What really matters is not supporting Erdoğan or the Justice and Development Party (AK Party), but respecting freedom of expression no matter how much opinions conflict. Nowadays, this fundamental principle is disregarded since any step favoring Erdoğan is not considered "cool," but I think this extremely oppressive atmosphere will eventually get past the endurance of real democrats.

It is enough to take a look at the German media to comprehend that the situation is not normal. Erdoğan always hits the headlines in German newspapers as if there was no other subject matter, while TV programs allocate a lot of coverage to Turkey and its upcoming referendum. Turkey is no longer just a foreign policy topic in Germany. One following the world agenda only through the German media could easily assume that Turkey is a component of Germany. Also, it is necessary to recall German Intelligence Chief Bruno Kahl's remarks with regard to the July 15 insurrection. Kahl said that he could not see any direct link between the Gülenist Terror Group (FETÖ) and the coup attempt. This irrational statement demonstrates that Germany is against Erdoğan's Turkey without having need for plausibility. On Monday, daily Hürriyet's former editor-in-chief Sedat Ergin objected to Kahl's statement by asking "Can Adil Öksüz be an alien according to German intelligence?"

In my opinion, this overtly manipulative policy is leading to a gradually climbing disturbance in liberal European circles. I believe that common sense will soon take over Europe and democratic circles will strictly object to this biased and defective attitude toward Turkey.
Last Update: Mar 23, 2017 1:35 am
RELATED TOPICS