Saturday march gives a message to all putschists 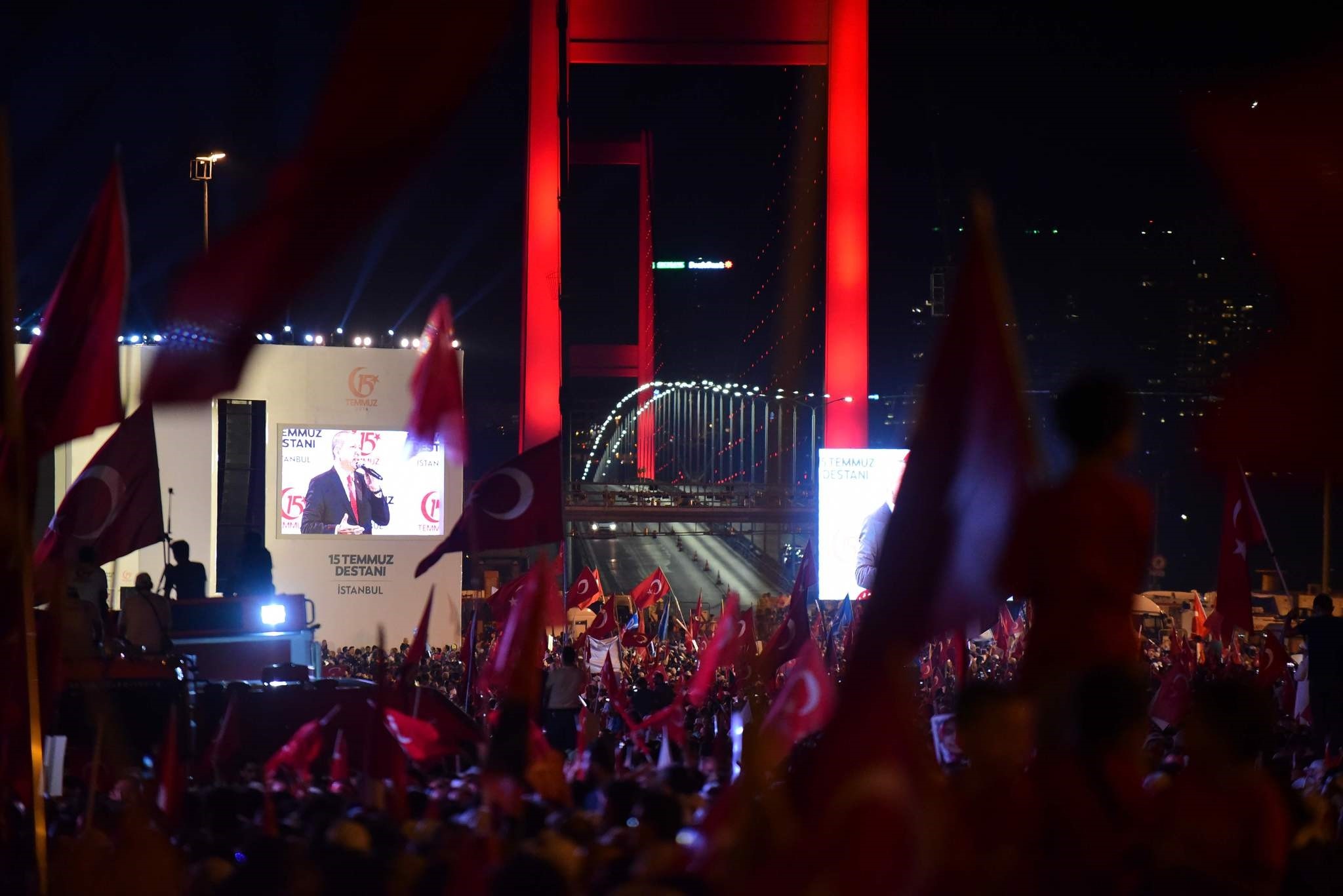 People wave Turkish national flags during the first anniversary of the failed coup on the July 15 Martyrs Bridge, Istanbul, July 15.
by Nagehan Alçı Jul 19, 2017 12:00 am

On Saturday night, millions of people took the streets to commemorate the first anniversary of the failed coup, giving a great anti-coup message for those who may again make such a plan in future

You must have probably seen the photos of crowds from Istanbul, Ankara, Diyarbakır, Kayseri and all over Turkey comprising all segments of society: Kurds, Turks, the religious, the secular, women, men, youth and the elderly.

Millions of people poured into the streets on the first anniversary of the atrocious July 15 coup attempt. It is hard to make sense of this spirit only through photos. This country has unique dynamics that are different from the way they are seen from outside. I would like to describe to you the feelings that spurred the millions to take to the streets with flags in their hands. I was among them and made TV broadcasts throughout the whole night to portray this very special spirit.

Turkey has witnessed military interventions a number of times. Initially, the government was overthrown with a coup in 1960. The prime minister, foreign minister and finance minister were executed on a decision issued by a despicable court founded by the putschists. Unfortunately, some left-wing intellectuals, politicians and generals have always valorized that coup. The state even declared the anniversary of the coup as a feast and the coup was celebrated for years. The executed prime minister, Adnan Menderes, was the beloved leader of the Democrat Party (DP), which came to power with the introduction of the multiparty system.

Afterward, the military intervened in politics dozens of times, in 1971 and 1980, to name a couple. Political institutions and politicians were very weak at the time and were always overpowered. Eventually, the Justice and Development Party (AK Party) and its leader, Recep Tayyip Erdoğan, beat this ill fate. Erdoğan consolidated the political institutions in Turkey, pursued policies that blocked military interventions and instilled self-confidence in people to stand up against such interventions.

Unfortunately, the environment created by the old putschists was the main reason for the consolidation of the terrorists led by Fetullah Gülen in the military, known as the Gülenist Terror Group (FETÖ) in the current context. The Gülenists in the judiciary and the police who seemed to give a legal struggle against the putschists and the deep state were involved in sweeping purges to make room for themselves in those institutions. The ultimate point of their atrocity was the coup attempt they organized on July 15 of last year. It was not only a coup attempt, but an attempt to occupy the country and break out a civil war. They targeted innocent civilians with jets, helicopters, tanks and heavy weapons, killing 250 people while injuring more than 2,000 others.

Consequently, the July 15 coup attempt naturally marks the requirement to call FETÖ operatives to account and cleanse them from state institutions, but it is more than that. On Saturday night, people took to the streets to condemn all the putschists of the past alongside FETÖ. Those who could not take to the streets for Menderes in 1960 followed their leader, Erdoğan, on Saturday night to avenge the past. For people, Erdoğan is a reminder that the people are the true owners of the country. He symbolizes the self-confidence of people, the end of the military republic, and the downfall of secularist, Kemalist and military bureaucracy, which used to be the sovereign power.

However, in order to wrap up the period of coups in Turkey forever, all the putschist of Republican history have to confess their sins. So, I believe that July 15 should not be solely associated with FETÖ. I have observed that a segment in the military still carries the traces of a mindset that condemns FETÖ and the July 15 insurrection while justifying the older coups, which is unacceptable. Those who are democratically elected have to be the only sovereign power in this country. Otherwise, in the absence of a strong leader like Erdoğan, the same danger might appear again.