Footsteps of a third intifada 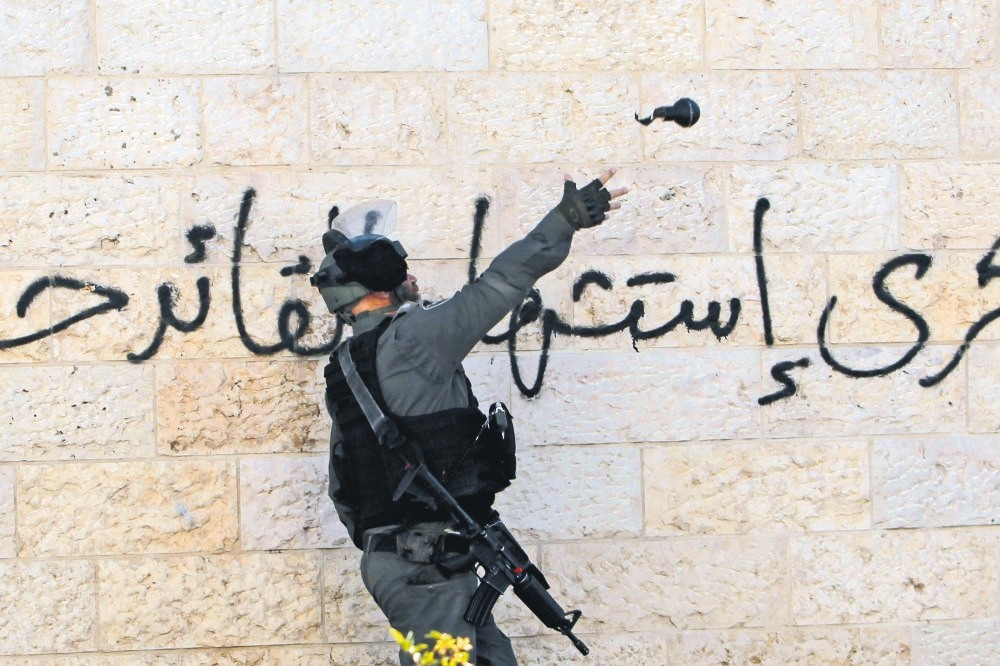 An Israeli soldier throws a teargas canister toward Palestinian protesters during clashes at the main entrance of the occupied West Bank town of Bethlehem, Dec. 12.
by Nagehan Alçı Dec 13, 2017 12:00 am

U.S. President Donald Trump's decision to move the U.S. Embassy to Jerusalem and declare the city as the capital of Israel is an open betrayal to human values and has no other aim other than consolidating his seat in power. Since Trump is unable to find the support he expects both within the U.S. system and in his own party, he is seeking to secure his office by receiving support from U.S.-based Zionist lobbies and Evangelicals.

It seems that with this move, Trump is basically aiming to protect his seat until the end of his term in office rather than succeeding in the next elections because a large majority in the U.S. is evidently disturbed by the situation. Evangelicals comprise much of Trump's base. Jewish-Americans on the other hand, generally support the Democratic Party and are not pleased with Trump's stance. I do not think that such a decision will affect their political identity. Also, the Republican base in the Midwest does not generally have a positive view of Jews, so Trump's latest move might actually cost him some losses at the polls.

Unfortunately, violence has already started in the Middle East as a harbinger of the impending chaos. Muslim communities strictly object to the decision, but the main problem in the Muslim world is the lack of administrations parallel to these communities. Most of them are weak and lack willpower. They cannot go beyond being satellites of the U.S. and represent their nations. Therefore, President Recep Tayyip Erdoğan's leadership and Turkey's voice are of critical importance in order to soothe the tension among Muslim communities and establish a sense of justice.

Trump's provocative decision is likely to ignite a third intifada. Hamas has already issued a statement on this. The first intifada took place between 1987 and 1993, and concluded with the signing of the Oslo Accords, and then the second one occurred between 2000 and 2005.

As a matter of fact, it is not possible to evaluate the process thoroughly without knowing the main aspects of the reasons underlying the Israeli-Palestinian conflict. To that end, I would like to offer a brief chronology of recent events.

During the first decade after Palestine's invasion, Palestinians kept hoping that Arab states would stand for them and save Palestine. This period can be defined as an evolution from a Zionist-Palestinian conflict to the Arab-Israeli war. However, within time, it turned out that the Arab world, particularly then Egyptian President Gamal Abdel Nasser, was reluctant to enter a military conflict with Israel.

Also, Arab countries other than Jordan did not favor Palestinian refugee camps, and because of the poor conditions, they were forced out of the countries. The Palestinian National Salvation Front emerged in this phase. The first movements came from the Gaza camps governed by the Egyptian administration and Kuwait.

In 1957, Fatah was established in Kuwait by Yasser Arafat, Khalil al-Wazir and Salah Khalaf. They favored resistance and, as such, Israel strongly opposed the movement and started to oppress those housing the proponents of the movement.

In 1964, Nasser founded the Palestine Liberation Organization (PLO) to deal with the situation. However, as Israel expanded its territory and displaced 665,000 Palestinians at the end of the 1967 Six Days War, the PLO declared independence. This radical step also changed the objective. From then on, the idea of a secular and democratic state in which Muslims, Jews and Christians could peacefully coexist was adopted by leaving behind the aim of overthrowing Israel. Meanwhile, Jordan became the headquarters of the guerrilla war.

In 1970, the PLO declared an independent state in east Jerusalem and started hijacking Israeli planes and landing them at Jordanian airports. Thus, Jordan became the main target and faced accusations. After King Hussein was subjected to an assassination attempt, a civil war broke out in Jordan and Palestinians suffered heavy losses in the face of the Jordanian army's offensive. Subsequently, the PLO moved to Lebanon and all its fractions were gathered under a single command unit.

A process of militarization was kicked off by purchasing weapons. Also, it was determined to move the activities to the West, and then came the Munich attack, in which Israeli Olympic team members were taken hostage and killed during the Summer Olympics in Munich.

In the midst of all this, the Lebanese Civil War erupted in 1975, which provided the PLO an opportunity to mobilize. Syria entered Lebanon in 1976, while Israel invaded the country in March 1978 and June 1982. While invading Lebanon in 1982, one of the objectives was to displace Palestinians out of Lebanon. This incident raised Palestinian nationalism. The massacre at the Shatila camp stirred the rage which laid the groundwork of the first intifada in 1987 and contributed to the Palestinian struggle on an international scale.

And now with the U.S.'s latest Jerusalem announcement, rage is rising once again. This may cost many lives, but the unjust suffering and rightful revolt by Palestinians might introduce a new phase.