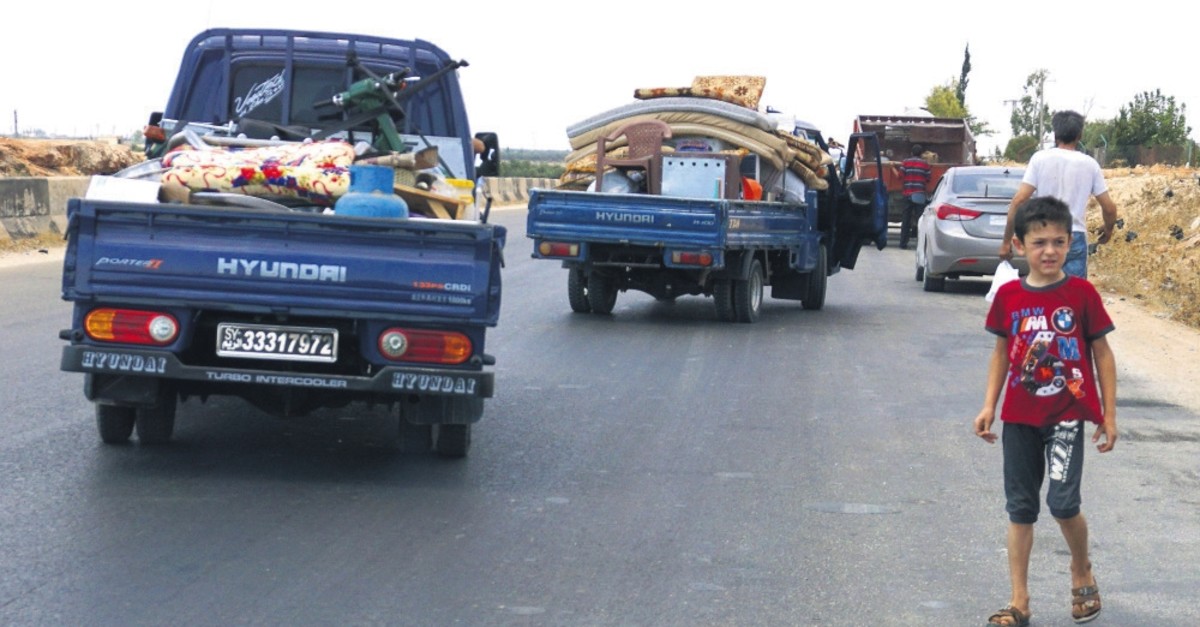 Syrians fleeing from the town of Maaret al-Numan and its surrounding countryside in northwestern Idlib province drive with their belongings as they try to escape from advancing regime forces, Aug. 22, 2019.
by Nagehan Alçı Aug 23, 2019 12:08 am

Turkey-Russia relations, which have been passing through a very positive period recently, were shaken by an air attack launched on a Turkish Armed Forces (TSK) military convoy two days ago in the northern Syrian town of Idlib. The attack immediately heightened tensions amid the developments concerning this critical town in Syria. It is the first time that a Turkish military convoy was targeted in an aerial attack. Idlib is one of the few areas of Syria that is not under the Bashar Assad regime's control. Now it is intended to be protected by a buffer zone, but the regime has been increasing its attacks in recent days. In fact, just last month, the death toll by regime bombardments reached several hundred and it is feared that more massacres will take place and a new wave of migration will follow. The town might be the ultimate catastrophe in Syria and unfortunately the world has gotten used to the brutalities, massacres and genocides in Syria in the nine years since the civil war broke out.

We have become immune to the horrible stories coming from the region but we know it is a hell on earth.

We should imagine Idlib as a giant concentration camp with three million civilians – including many kids, elderly people and women – whose lives are in danger. The regime claims that it is hunting the remnants of terrorist groups but is openly taking aim at all the lives of this city's residents.

But Russia and the regime want to portray a different picture to the world. Russian Foreign Minister Sergei Lavrov said on Thursday that Russia informed Turkey that it intended to crush the Hayat Tahrir al-Sham (HTS) terrorists in Idlib. It wants to depict the attacks as simply targeting terror but it clearly is not making any effort to differentiate between militants and civilians.

Turkey and Russia made a deal on Idlib last September to establish a demilitarized zone in the region with Turkey setting up 12 observation points. Turkey takes the responsibility to fight against the extremist groups but for a couple months now the regime has been taking the initiative to launch attacks.

Unfortunately, the situation is more than alarming. I asked the Turkish authorities about the projected developments and found out that Turkey is already making arrangements for a possible wave of migration.

If this mass migration comes to pass, people from Idlib will be placed in the buffer zone but of course taking care of hundreds of thousands of new refugees is a new challenge and not a matter only for Turkey but also for Europe and the United States. That is why the international community should see the potential danger in Idlib and try to hinder the regime and Russian forces from displacing millions of the city's residents.