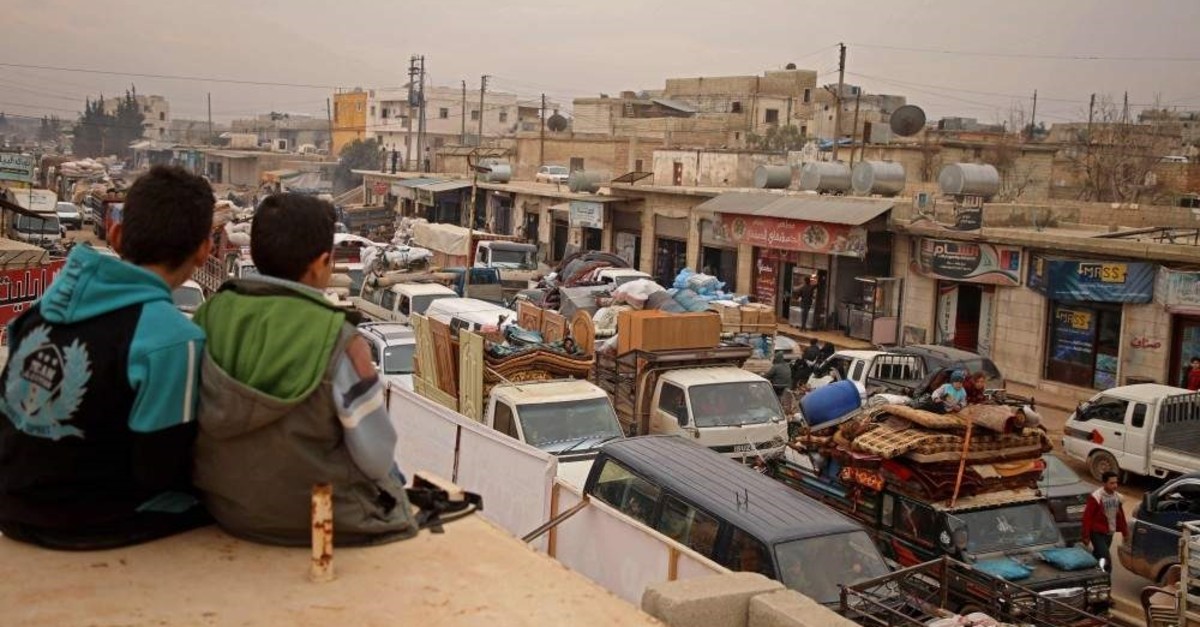 Syrian boys sit on a ledge and watch traffic in the town of Hazano in the northern countryside of Idlib, as people flee northwards in vehicles transporting their belongings, amid an ongoing regime offensive, Feb. 4, 2020. (AFP Photo)
by Nagehan Alçı Feb 07, 2020 1:18 am

Turkey will not stop until the safety of Idlib civilians is ensured. This is what the international community must first see

Idlib is burning. Seven Turkish soldiers and a Turkish civilian lost their lives in an attack by the Syrian regime. Around 400,000 people, 80% of whom are women and children, have been forced to migrate to the Turkish border, another 100,000 are on the way while the regime continues its massacre of civilians.

Ankara retaliated against Syrian military attacks by sending a large military convoy to Idlib for security purposes as Turkey continues to react firmly to all such attacks. The foreign ministry said its forces which were sent as reinforcements came under fire despite advance notification of their coordinates. But Russia claimed that Turkish troops were shot because of a lack of such communication.

But this explanation is not satisfactory. Turkey is willing to maintain good relations with Russia, but it will not stop the country from responding to the Assad regime's attacks.

In a press conference before leaving for Ukraine, President Recep Tayyip Erdoğan said "those who test Turkey's determination with such vile attacks will understand their mistake. It is not possible for us to remain silent when our soldiers are being martyred."

Erdoğan and his Russian counterpart President Vladimir Putin held phone calls on Tuesday. Erdoğan said that Turkey would continue to use its right to self-defense against similar attacks, and he stressed the importance of joint peace efforts in the country.

Turkey-Russia relations have been improving for a couple of years despite supporting opposing sides in the conflicts in Syria and Libya. But I suppose that despite the obvious discrepancies, cooperation between the two countries is deep and strategic enough to keep its pace.

However, Idlib is like a bomb waiting to explode. Turkish officials have been warning against an impending humanitarian crisis, but the Assad regime backed by Russia seems to ignore the thousands of innocent lives at risk.

In Idlib, the opposition forces dominated by Tahrir el-Sham and other groups are fighting against the regime. Assad's forces and Russia have been attacking without regard to the large number of civilian population residing in the city. This is why Turkey has been urging the regime to halt the assaults: Hundreds of people are killed almost every day.

There is a massacre going on, and the world is watching. Turkey has been trying to push all actors involved to play their part in ending the war. Unfortunately, lives are lost in this struggle, but Turkey's efforts to end the humanitarian crisis will continue. It should not be forgotten that Turkey has 12 military observation posts dotted around Idlib under an agreement reached with Russia. The regime's attack happened where Turkey deployed troops.

Ankara continues to host around 3.6 million Syrians which is by far the greatest number of Syrian refugees in the world while more refugees gather at its border. The world should see Turkey's efforts for peace and the difficult humanitarian situation it faces at its borders.