Morsi's death sentence or a democracy test for the West 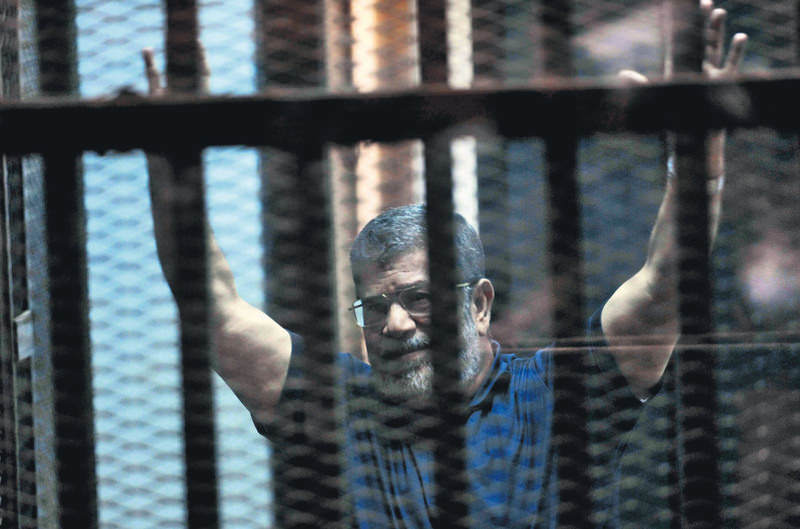 When the West remembers the long-forgotten rule of ‘tolerating democratic processes for the sake of a democratic culture,' it can side with democracy in the Islamic world

A scenario to which Turkey is not a stranger has come into play in Egypt. The country's popularly-elected former President Mohammed Morsi, was ousted in a military coup on the grounds of "his failure to internalize democratic culture" and "many mistakes." He was sentenced to death several days ago. The Western world has not voiced a remarkable reaction to this decision. Regardless of whether one approves of him or not, Morsi came to power through democratic elections, however he was toppled in a coup and sentenced to capital punishment after a so-called trial. There is a certain form and content of democratic reaction against it.

It is known that an accusation which is put forward due to the violation of democracy does not legitimize a coup, which, after all, does not have any legitimacy. However, this knowledge is concealed when it comes to the Islamic world. For the West, the will that emerges when a democratic period starts in the Islamic world is not preferable to "controllable" dictatorships.

Turkey also experienced similar processes. The Democrat Party government, which came to power through democratic means three times in a row, was toppled with a coup on May 27, 1960, and Parliament was dissolved. All deputies from the party were arrested, with many of them standing trial. Following a one-year trial, then-Prime Minister Adnan Menderes was executed along with two other ministers. In those days, the Western world lapsed into silence as it is doing today. Once coup makers declared "commitment to NATO" in Turkey, which is a member of the Council of Europe and NATO, everything else was triviality. The West supported the coup and concomitant constitutional order in which we have been living for over 50 years.

The formula of "failure to internalize democratic values" still functions as a magic wand that the West waves to support coups. In fact, democratic values are outcomes and democracy is the name of a political process that enables the production of values over the course of time. The basic constituents of procedures and processes that create democracy are as follows: Free and fair elections, the participation of different parties and programs in the race for power and the presence of a democratic constitutional structure and a judicial system that are convenient for the protection of minorities and fundamental rights. Additionally, the party that receives the majority of the vote has the authority to make final decisions on the determination of the country's basic politics and the use of legislative power during its tenure.

What gives legitimacy to democracy is the processes of social participation rather than values. Values and culture are the outcomes of processes. Otherwise, we might assume that there are some transcendental values that must be achieved and that the mission of democracy is to make society reach these values - an understanding that results in tyranny instead of democracy.

Consequently, democracy is eliminated using the "standards of judgment," which are merely one of the outcomes of democracy. Just as Morsi's "mistakes" were turned into a legitimate cover for a coup, subversion and the slaughter of thousands of people, Menderes's flaws were similarly turned into a legitimate pretext for executions after the May 27 coup, which is one of the darkest and most subversive coups in Turkish history, and and led to the tutelary system that we still strive to get rid of.

When the West remembers the long-forgotten rule of "tolerating democratic processes for the sake of a democratic culture," it can side with democracy in the Islamic world. This remembrance might introduce peace to the region.

Osman Can is a Law Professor and Reporting Judge at the Turkish Constitutional Court. He holds a PhD from the University of Cologne, Germany.
RELATED TOPICS