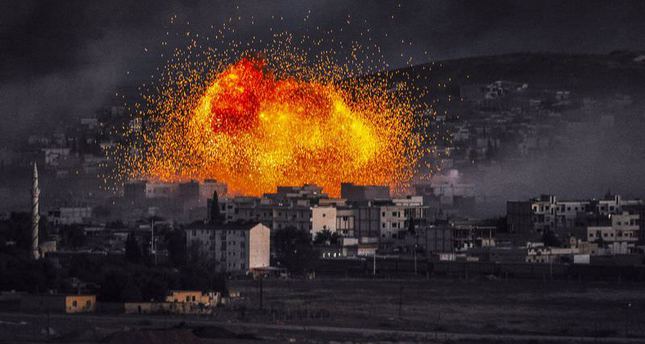 by Ozan Ceyhun Oct 28, 2014 12:00 am
The decisions taken by the EU heads of state who gathered on Friday are the steps we were longing for. We hope these decisions will be a worthy starting point.

The fact that the EU Summit regarded the fight against the Islamic State of Iraq and al-Sham (ISIS) as a key point in foreign political relations with Turkey proves that President Recep Tayyip Erdoğan's calls to the U.S. and EU yielded some results. The EU leaders saw that Turkey took over a critical mission of saving the lives of over 170,000 people from Kobani by welcoming them as part of the fight against ISIS and the allegations against Turkey, claiming that Turkey is just watching the incidents, were answered.

Turkey has been insisting on the impossibility of overcoming terrorist groups, including ISIS, without combating the regime of Syrian President Bashar Assad, who is engaged in a bloody war against his own community for the last three-and-a-half years. The EU, on the other hand, seems to agree with Turkey on that matter, but remained indifferent. So the decisions made at the EU Summit regarding Syria bear importance although they are not sufficient.

The EU expanded the sanctions imposed on Assad's terrorist regime. Within the scope of the new sanctions, the number of people influenced by the sanctions has increased to 211, while the number of affected institutions reached 63. This step can be regarded as a message in the right direction, although it is not enough by itself.

Also, it seems that the EU is determined to prohibit jet fuel exports to Syria. Of course it does not compromise on the past airstrikes from Syrian aircraft that killed thousands of innocent people – but it is still progress.

The released statements say that the Assad regime's brutal war against his own people, his violation of human rights and systematic prohibition of democratic reforms paved the way for the rise of ISIS so the Assad regime cannot be an ally in the fight against ISIS due to its policies and actions. It can be said that they eventually started to comprehend Turkey.

I hope these subjects underlined by the heads of state during the EU Summit last week will also be handled by the European Parliament with the same attention.

I think the European Parliament, which claims to be very sensitive toward human rights issues, urgently needs some self-criticism.

If the EU and the European Parliament really want to contribute to peace in the Middle East, it is only possible through understanding Turkey.

It would be naive to assume that fighting against terrorism entails only fighting against ISIS. Also, seeking to aid terrorist groups such as the PKK and Democratic Union Party (PYD), who did not take a stand against Assad or ISIS until ISIS invaded Kobani, would be a boomerang policy for the EU that would cause great damage.

For the last three years, Turkey has been trying to express the truth, and it has not remained indifferent to the bloodshed and torture.

Turkey saved the lives of about 2 million people by welcoming them into the country regardless of their ethnicity or religion. The country refused opportunist policies and chose to side with the oppressed.

NATO and the EU are actually lucky to have Turkey as a partner. Trying to understand Turkey, which actually preserves EU values by warning the world against the plots of the wrong polices of the U.S. and Israel, would be the most appropriate attitude to understand the Middle East and contribute to peace.

As a former deputy of the European Parliament, I wish all the deputies there would also realize this fact.