US condemns PKK violence while training its militants in YPG ranks 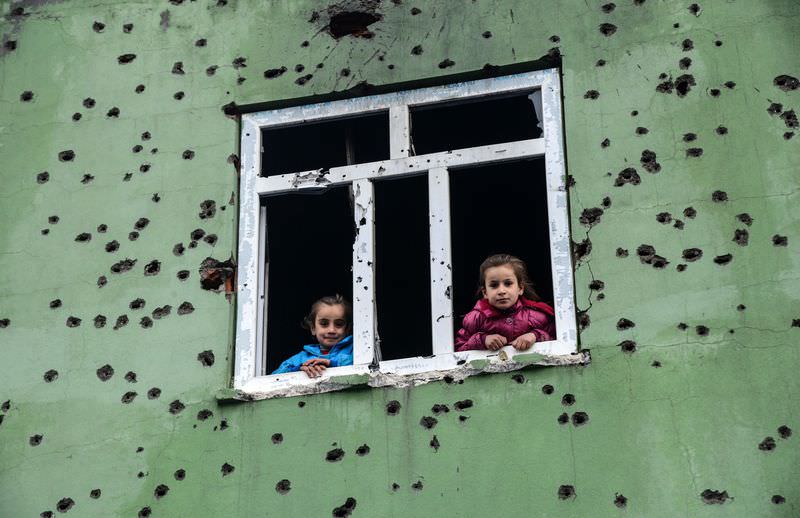 Children looking out from a window of a bullet-scarred house after the PKK militants attacked in the town of Silopi, in southeastern Turkey
by Ragıp Soylu
Jan 21, 2016 12:00 am

The PKK's recent car bombing in Diyarbakır that targeted a police headquarters and surrounding buildings killed five civilians including an infant and two children.

The United States was quick to condemn the act of terror, but Turks are still furious at the U.S.'s continued policy of material and training support for PKK's Syrian affiliate Democratic Union Party (PYD).

U.S. President Barack Obama's administration has previously refused to accept that the PYD is linked to the PKK and repeatedly challenges allegations with defensive rhetoric despite a WikiLeaks cable showing that former senior American diplomats thought the same. U.S. officials have not changed their stance even though there is plenty of evidence to the contrary, including interviews with PKK fighters in PYD ranks, pictures of imprisoned PKK leader Abdullah Öcalan on Kurdish uniforms and observations by foreign journalists and academics.

Warnings from Turkish officials about the group also fell on deaf ears. The U.S. employed an opportunistic and short-sighted strategy since it needed ground troops effective against DAESH. Turkey's long-term stability, which is already undermined by the PKK's Syria-inspired urban warfare, meant little to the Americans.

Oddly, it was PYD Co-Chair Salih Muslim who said two weeks ago to Al-Quds Al-Arabi that hundreds of PKK fighters were in the PYD's armed People's Protection Units (YPG) ranks. He defended the existence of Kurdish militants, saying: "It is quite natural for a Kurd who was formerly one of the [PKK] fighters in the mountains to defend his home." Of course, this was no secret, but I still wondered about the U.S.'s official reaction to the statement since at least 50 U.S. special forces are training and providing support to YPG soldiers and thereby doing the same for militants from the PKK, which is a U.S.-designated terrorist organization.

In response to my question regarding the issue, U.S. State Department spokesman John Kirby last week said that he does not have the identification cards of everybody in the YPG.

"That's not new. We've made clear our concerns about this group," he said, first dismissing my question as old news. He then defended himself: "I haven't seen Muslim's comments." Most probably U.S. officials preferred to ignore Muslim's recent fruitful travels to Moscow as well as deliveries of Russian arms and air cover for the YPG against moderate Syrian opposition groups north of Aleppo.

This is why the Turkish military did not hesitate last month to deploy some soldiers to Qamishli in Syria in order to build a line of defense supported by walls, trenches, towers and sensors.

Neither did it shy away from using artillery fire to target YPG forces trying to cross the Euphrates River.

For its part, the U.S. is upholding the initial agreement with Turkey about the remaining part of the Syrian border that is still under DAESH occupation. Turkey has recently provided artillery cover for Turkmen and Arab groups' advance against DAESH in northern Aleppo and is trying to remove landmines laid by DAESH from the border and prepare the area for Syrian Arab rule.

Kahl also said the U.S. made it clear to the Kurds that "it is a red line for them to cross [the Euphrates] and clear the rest of the [Syrian] border." Reports in Turkish press, however, indicate that Turkish officials believe American and Russian weapons delivered to the YPG are ending up in the hands of American-trained PKK militants who possibly kill Turkish citizens.

Biden's visit to Istanbul this weekend will demonstrate how two NATO allies might be able to manage their biggest differences in Syria, but the upcoming days already seem gloomy due to the fragility of the Syria talks.
Last Update: Jan 21, 2016 2:43 am