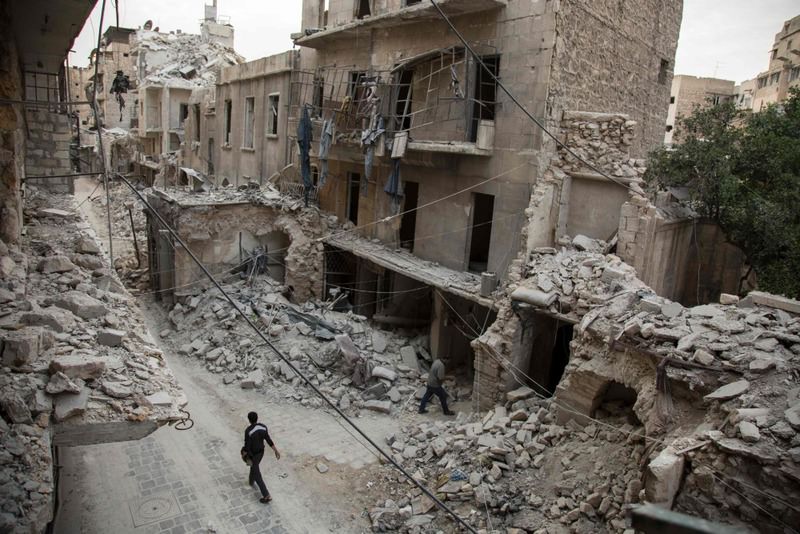 A man walking amid destroyed buildings in Aleppo's Bab al-Hadid neighbourhood, Syria.
by Ragıp Soylu May 05, 2016 12:00 am

The status quo cannot justify the U.S. backing the PYD and YPG, whose mentality is not much different than that of other extremist groups in Syria

The calls for emboldened Turkish-American bilateral cooperation with the Kurdish militant Democratic Union Party (PYD) in Syria reached a peak in Washington last week. The newly established Kurdish Policy Research Institute (KPRC), which some sources say is funded by Iraqi Kurdish politician Qubad Talabani's entourage, co-organized the third Kurdish conference with Turkey's pro-Kurdish Peoples' Democratic Party (HDP). The title of the conference, "Co-Existence through Democratic Autonomy and Self-Government: The Kurdish Case," mirrored the PKK's baseline policies, which are democratic autonomy and self-governance. Even though the PKK has been designated a terrorist organization around the world, its Syrian affiliate PYD and legal wing HDP are mostly welcomed in Washington's policy circles. It is publicly known that the need for a ground force against DAESH in Syria works in the PYD's favor while HDP Co-Chair Selahattin Demirtaş is superficially seen as a peace-building personality just because he opposes President Recep Tayyip Erdoğan's rule.

So it was simply a conference that convened to discuss imprisoned PKK leader Abdullah Öcalan's solutions for the region's problem, but of course, for the obvious reasons, no one mentioned him. The panels, at least for me, were very telling in order to understand the PYD and its allies' thinking on Turkey.

First, People's Protection Units (YPG) spokesman Redur Khlalil accused Turkey of providing military aid simultaneously to al-Qaida-linked Nusra Front, DAESH and Ahrar al-Sham. Never mind that these groups are in war with each other, it does not need to make sense. Because for the YPG or PYD leadership demonizing the Turkish leadership plays into their hands, as in fall 2014. While YPG soldiers were receiving treatment in Turkish hospitals and Turkey was taking in thousands of Syrian Kurds, the PKK leadership had guts to blame Turkey for DAESH's advance.

Then we heard from PYD Co-Chair Salih Muslim, who spoke from Brussels via Skype. He also, not surprisingly, attacked Turkey for its alleged support of DAESH until very recent weeks. But again, you should ignore that DAESH has been conducting suicide bombings around Turkey on various targets and hitting the border town of Kilis with Katyusha rockets. Turkey, in response, hit DAESH positions countless times and killed dozens of militants. The PYD would not talk to this since any tangible fact proving Turkey's decisive war against terrorist groups would weaken Muslim's rhetoric that the PYD's YPG are the only group fighting extremists in Syria.

This is of course, in many ways, ridiculous. Muslim mentioned his party's "democratic" stance or creating democracy in Syria in his speech more than a dozen times. It was a bit ironic, because that same morning a video from the Syrian town of Afrin exposed that Muslim's PYD and YPG were parading dead bodies of Syrian opposition forces in the streets in broad daylight. Celebratory music played while Afrin residents were taking selfies with the corpses. It was a reminder for everybody that the PYD's mentality is not much different than that of other extremist groups in Syria. Actually, the PKK, through its offshoot PYD, has learned a lot from its enemy, DAESH. The PKK's urban warfare tactics, i.e., improvised explosive devices and car bombs are clearly copied from the fake caliphate.

U.S. President Barack Obama's administration condemned the parading of corpses but underlined that they have no interaction whatsoever with "Afrin Kurds." Yes, U.S. special forces aid the YPG in northwestern Syria, but their institutional partnership is with the PYD, as U.S. Special Presidential Envoy for the Global Coalition to Counter ISIS (DAESH) Brett McGurk's visit showed this winter. So this dubious conception of "Afrin Kurds" is simply a joke that no one takes seriously in Ankara.

Muslim also said the YPG might have taken aid from the PKK and his party is in contact with every Kurdish group in the region, including the PKK. Not quite revealing. I am sure the U.S. State Department would not be convinced with this confirmation that the YPG is working with the PKK, as documents, pictures and testimonies could not convince them so far.

Still, there is a larger policy problem. As former U.S. Ambassador to Syria Robert Ford told Kasim İleri from Anadolu Agency on Tuesday that the U.S. is unable to control the PYD while its cadres are flirting with Russia, Bashar Assad and Iran.

Obama decided to send more special forces to Syria to embolden U.S. support for this group. This strategy is still working at the expense of NATO ally Turkey, and Turkish citizens would never forget that an American president effectively helped a terror organization that has killed thousands of innocent people.

U.S. policies in Syria are likely to hurt Washington, and this time Turkey might not be sorry about it.
Last Update: May 05, 2016 2:59 am
RELATED TOPICS