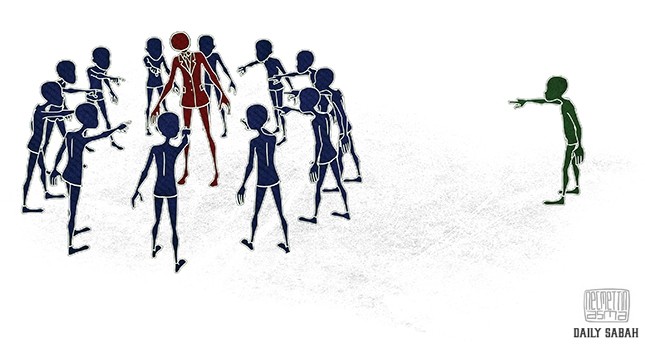 Washington-based think tanks are not as interested in the U.S.'s policies as they are in Turkey's domestic and foreign policies. The Kurdish issue in particular is their recent favorite

Every week, as a Turkish reporter based in Washington, I am compelled to read various reports, analyses and commentaries on Turkish domestic and foreign policy. Most of them, especially those prepared by Washington think tanks, amuse me in terms of their lack of originality, and disconnection from reality. This week, the Bipartisan Policy Center published such a report on Turkey's Kurdish issue that tries to contextualize the topic vis-à-vis the Turkish-American partnership in the region. The authors of the report sound very concerned about Turkey's domestic peace and have much for Turkish and American leaders. Regardless of the content, these kinds of reports are pointless.

There is a sitting American president who is not interested in any sort of intervention in the Middle East. The presumptive Republican nominee for the upcoming presidential elections, Donald Trump, is an isolationist. Bernie Sanders, one of the Democratic Party's two presidential candidates, is also an isolationist. The other is Hillary Clinton, a former U.S. secretary of state and presumptive Democratic nominee. I agree that she might seem hawkish, but it is quite clear to everyone in town that she will not get into any adventure and would mostly mind domestic challenges because she is cautious and would like to win a second term.

It means American policymakers would not be very interested in Turkish foreign policy other than those related to hardcore U.S. interests, let alone its domestic posture. Yet think tanks like the Bipartisan Policy Center are very much into producing these kinds of reports that suggest a pro-interventionist stance in Turkish domestic politics. This will not happen, at least when there is a president who did not even feel obliged to intervene in a country when thousands of civilians were massacred. Americans were also not very concerned when the Syrian butcher, Bashar Assad, poisoned dozens in a night, including children.

The report's contents are also very problematic. The Bipartisan Policy Center might try to have a neutral stance on U.S. domestic politics, but clearly it is not bipartisan when it comes to Turkey. First, in the report, "Authoritarianism and Escalation: Preparing the Worst in Turkey's Resurgent Kurdish Conflict," they treat the Turkish state and the PKK as legitimately equal actors. If you recall, one is a NATO ally and the other is a Marxist extremist organization that uses terrorism as a mean to reach its objectives. I am quite sure the democratically elected government is more legitimate, but apparently the Bipartisan Policy Center does not.

The think tank also prefers the PKK's legal wing, the Peoples' Democratic Party (HDP), in Turkish domestic politics as a favorite actor. We have heard many times in Washington that the HDP's pro-Iran, Assad-friendly and Hezbollah supporter co-chair, Selahattin Demirtaş, is the most pro-American voice in Turkey. Let it be. However, none of this validates an agenda that is trying to rewrite history to whitewash the PKK.

There is no single mention about withdrawal of PKK forces from Turkey in the report, which was the Turkish government's basic demand, and the PKK had agreed to uphold it. A researcher can easily find Demirtaş's statements from the spring of 2013 when he said that the PKK would withdraw all of its forces in a couple months. The PKK suspended this process long ago, while the Turkish government has been producing legislation to provide more rights for its Kurdish citizens. The ruling Justice and Development Party (AK Party) also met the PKK's most significant demand - legislation that provided a legal basis for negotiations with the PKK. Parliament passed that law in summer 2014.

The report also says the HDP chose "to fuse the fight for Kurdish rights with the nation's larger battle for democracy, leading a liberal campaign against [President Recep Tayyip] Erdoğan's presidential ambitions in the spring of 2015." That sounds great for American readers. The peace-loving, liberal HDP is victorious, always. However, the HDP, which actually has not been able do anything politically significant without the blessings of top PKK commanders, has never been an independent actor employing a strategy against the AK Party. The PKK's imprisoned leader, Abdullah Öcalan, engineered the idea of an umbrella party that would include all the minor leftist parties. It is no secret that establishing a strong pro-Kurdish party in Turkey was also a topic of negotiation between the PKK and the Turkish government to legalize PKK cadres that are not directly involved in violence.

The report also depicts Erdoğan as someone who suddenly decided to distance himself from the Dolmabahçe declaration, which was not an agreement, as the report seems to suggest. It was a declaration based on Öcalan's thoughts on the articles of formal negotiations, which the government never consented to. Demirtaş himself, just hours after the revelation of the declaration, questioned the government's honesty in peace making and claimed that it "cannot make peace with this mindset."

In order to take the demilitarization decision, the PKK said Öcalan must be released and convene a general convention in northern Iraq's Qandil Montains, where PKK headquarters are located. The government and Erdoğan perceived all of this as strong signals that the PKK was not serious about peace after two years of negotiations. They waited for the PKK's complete withdrawal and a proper decision from the PKK to demilitarize. Yet, the PKK was coming with more and more demands, while it was stockpiling explosives and weapons in villages and towns.

Moreover, the report says the HDP preferred to run against Erdoğan's authoritarianism to curb his desire to have more powers in an executive presidency. Erdoğan's ambition to grab power is a common topic in similar reports. For example, the Bipartisan Policy Center report alleges that Erdoğan partly derailed the reconciliation process because the HDP was running against his presidential ambitions. Ironically, Öcalan himself was the first person who publicly declared that the Kurdish movement could support Erdoğan's enhanced presidential powers if they agree on basics. Öcalan made this statement in spring 2013, when Erdoğan was not yet president. The Kurdish movement put this bargaining chip on the table, not Erdoğan.

Finally, the report mentions Turkey's security forces deliberately vandalizing houses during their anti-PKK operations in southeastern cities. Sadly, it is true that some members of police have done such things. But the report does not talk about the great number of houses vandalized by the PKK. The report presents Turkish forces as invaders in Kurdish towns, while the streets of those towns were barricaded, when trenches were dug and snipers were deployed. The PKK used improvised explosive devices (IED) to inflict heavy casualties on security forces and set booby traps in houses, in some cases in an entire town. Rocket propelled grenades (RPG) and IEDs have killed many members of the security forces and led to the destruction of cities. This is an urban warfare tactic that DAESH uses in Syria and Iraq today. It takes months to remove booby traps from residential areas. But, of course, the Bipartisan Policy Center is not interested in that.

The Bipartisan Policy Center can continue to publish one-sided and ill-advised reports to make its donors happy, but this approach has not been helpful in creating synergy to resolve the problems between Turkey and the United States. The solution is more engagement rather than partisan bickering.
RELATED TOPICS