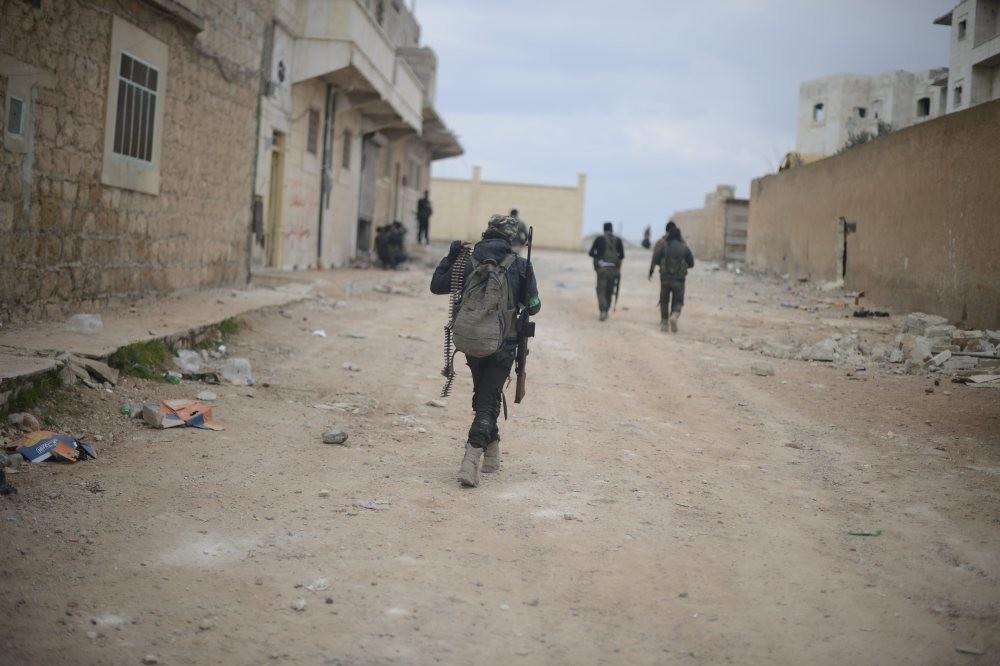 A Free Syrian Army fighter walking in the Syrian town of al-Bab after its liberation from Daesh terrorists as part of Operation Euphrates Shield launched by the Turkish military in support of FSA forces, Feb. 20.
by Ragıp Soylu Mar 02, 2017 12:00 am

It seems, Trump, also like Obama, is likely to cooperate with the Syrian Kurdish group YPG in the region. Hence, making it impossible to start a new era in Turkey-U.S. relations

It was immediately after the U.S. presidential elections that a series of videos belonging to Trump transition officials popped up on the internet showing that some key people in the new administration expressed opinions in the past that are very troubling for Ankara.

I remember thinking that the Trump administration was likely to be as combative as its predecessor on bilateral Turkish-American relations, as in line with Turkey's worries. But a senior Turkish official, disagreed with me, "We know what Hillary Clinton would have done if she had won the election. It would have been business as usual. But now, there is an opening; that we may work together. We'll give it a try," he said.

Expectations in Ankara are still running high, but we have every evidence that the Trump administration is likely to disappoint Turkey on the Raqqa front and the problem surrounding the terror group PKK's Syrian armed wing, the People's Protection Units (YPG).

The main conundrums are technical. There is a domestic one: One of U.S. President Donald Trump's main campaign promises was to accelerate the fight against Daesh. The domestic scandals that the White House is failing to cope with are also pressing the urgency of the Raqqa operation since Trump needs something to boost his popularity. A military victory could bolster his ratings.

And on the military front, U.S. Central Command (CENTCOM) believes the best way to capture Raqqa is by utilizing the YPG-led Syrian Democratic Forces (SDF). Kurdish troops in this alliance stand at around 25,000 while the Arab forces are estimated to be 20,000.

Turkish media reports suggest Turkey can match this force with 5,000 Special Forces and 10,000 Free Syrian Army (FSA) troops. Various sources told me that the Pentagon found this insufficient. Trump was willing to send more American troops into Raqqa, but I hear Secretary of Defense James Mattis was not in favor of such an approach. Nor is Turkey's other option of training an alternative force for the near future acceptable to the U.S. generals because it would force the Pentagon to wait until 2018. So there are not many options for the Raqqa operation, and the SDF-YPG have the upper hand, unless President Trump decides to use American ground troops or comes up with a more creative strategy.

I think the best Turkey can hope for in this situation is to prevent the U.S. from directly arming the YPG, including heavy weapons such as advanced anti-tank systems, mortars and automatic weapons. CENTCOM commander General Joseph Votel told the American media that it was imperative to arm the YPG to capture Raqqa. But this step would seriously risk Turkish-American relations and would most probably backfire in the near future because the YPG, or the PKK, would receive some high-grade military training to use these weapons. And this experience would eventually be directed against Turkey with more hostilities.

Col. Richard Outzen, a senior U.S. Army Adviser and Member, Policy Planning Staff at U.S. Department of State, said at a panel hosted by the Washington-based Turkish Heritage Organization (THO) that both countries were trying their best to coordinate efforts. Outzen underlined the importance of taking an anti-Daesh military approach based on the close coordination of allies, and seemed hopeful about the upcoming days, which will reveal the U.S.'s moves in Syria.

In the case of the U.S. dismissal of key Turkish concerns and directly arming the YPG while continuing to ignore the fact that the YPG is a hostile group against Turkey, things will definitely backfire.

Turkey is prone to pursue its already declared target, Manbij. A Turkish-backed military action against Manbij will seriously undermine American plans to seize Raqqa since SDF forces would flock back to defend the city.

I do not think Turkey would let this leverage go so easily and will use this Manbij issue to force the Pentagon's hand.
Last Update: Mar 02, 2017 1:41 am
RELATED TOPICS