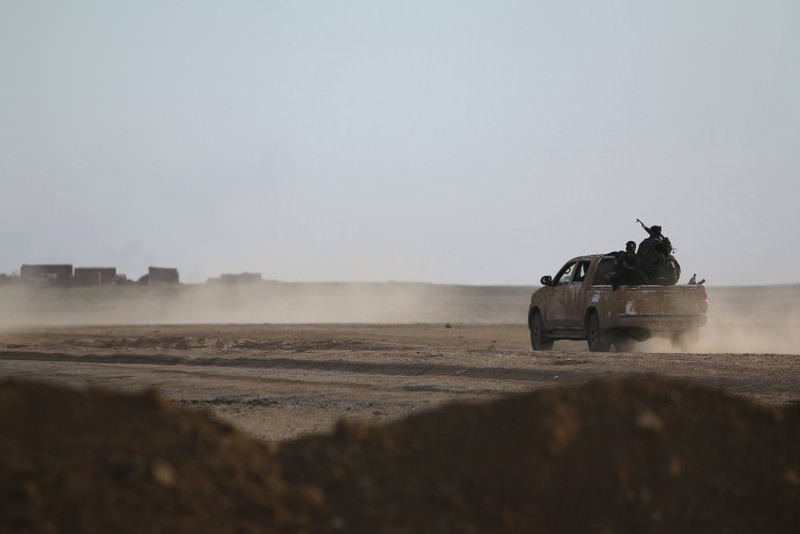 Fighters from the Democratic Forces of Syria driving to position themselves in Ghazila village after taking control of the town in the southern countryside of Hasaka, Syria.
by Saadet Oruç Feb 22, 2016 12:00 am

DAESH has become an excellent excuse and tool, especially for PYD terrorists, to reach their goal of forming an entity along the Turkish-Syrian border

Recently, the United States has insisted that the Democratic Union Party (PYD), despite being the Syrian branch of the PKK, is not a terrorist organization. Even though the Syrian terrorist organization PYD bears responsibility for the recent Ankara attack which caused the death of the 28 people, Washington continues to argue that the PYD is a partner in its struggle against DAESH.

News reports from Western news agencies have failed to distinguish between the "PYD" and "Syrian Kurds."

As the U.S.'s priority in Syria shifted from toppling Assad to eliminating DAESH, it has been seen that DAESH has become an excellent excuse and tool, especially for PYD terrorists, to reach their goal to forming an entity along the Turkish-Syrian border.

Despite evidence confirming the terrorist activities of the PYD, the U.S. prefers to describe the PYD as "brave fighters."

However the PYD leader has himself admitted the link between his organization and the PKK, which is on the U.S. terrorist watch list.

Salih Muslim described the relations between him and the PKK's imprisoned leader Abdullah Öcalan during an interview I carried out with him. As a coincidence, I traveled to Paris from Istanbul on the same plane in 2013, while I was working as a journalist for the Star daily.

I carried out a long interview with the leader of the PYD, then returning from his talks in Ankara, before the Syrian branch of the PKK took what can be described as the last exit on its way to terrorism.

There were surrealist claims that he met with Öcalan, at İmralı prison, where he was held for years. Denying the claims, he stated that he had wished to do so, since Öcalan was his old friend. "We have the same goals and the same policy, we are old friends," Muslim said during the interview. He also complained that the U.S. and the West in general, did not see them as counterparts.And Muslim was trying to form a broad-based administrative structure in northern Syria, without any complaint from DAESH.

Muslim was complaining about the West but not DAESH, at the time. Disgruntled by the endless relations between the PYD and the Assad regime, and also by PYD/PKK cooperation, Ankara had frozen contacts with the PYD at the very first stage.The PYD was not able to use the last chance given by Ankara, before the last exit to terrorism!

In a report published in October 2015 which was not discussed much, Amnesty International revealed that the PYD and its armed win People's Protection Units (YPG) was demolishing houses of civilians and displacing inhabitants, abusing authority as well as breaking international law.

Amnesty International referred to satellite images of the villages destroyed by the PYD/YPG. "We saw extensive destruction and displacement which did not occur as a result of fighting," said the report.

Brave fighters of the U.S., which started with oppression and terrorism of Syrian villages, continued until they commit bomb attacks in the center of Ankara.