Song of the Syrian child: Today I will not die, today my land is Turkey 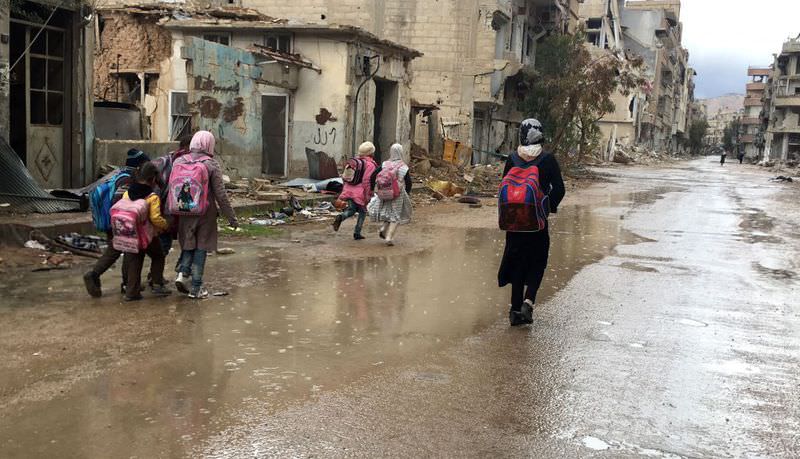 Syrian girls walk home from school in the rain in the southwestern city of Daraa, Syria.
by Saadet Oruç Apr 25, 2016 12:00 am

Turkey has become home, school and hospital to the millions of Syrian refugee children who fled the brutality of the Assad regime

On the walls of a school for Syrian child refugees in Esenler, Istanbul, there is a child's drawing of a ship sailing toward the homeland with the Syrian flag, reflecting how the little Syrian child misses home. The child did not forget to draw the sun on one side of the paper, showing that hope still exists. The school was opened by the mother of 16-year old Omar, who was killed by Syrian forces in Syria.

I remembered this drawing, while watching Children's Day celebrations, and thought about Haider Jalabi and Omar – two unknown Syrian children – and of course Aylan Kurdi, whose small body became the symbol of the refugee crisis.

Jalabi was another Syrian child left alone in Turkey after Morocco refused him entry. Following days of a lonely stay in Turkey, he was able meet his father who fled from the war in Syria in Morocco.

On April 23, National Sovereignty and Children's Day, Turkey hosted children from different corners of the world for celebrations. As a country granting a special day for the world's children drawing a parallel between national sovereignty, the future of the country and children, Turkey has allotted special attention to Syrian refugee children who fled the atrocities in Syria. Providing shelter for nearly 2.5 million refugees, Turkey has become home for millions of Syrian children.Figures reflect the tragedy of Syrian children much better than words. According to UNICEF, 80 percent of Syrian children have been affected by the civil war in Syria, eight children in 10 are in need of humanitarian assistance, four children in 10 are displaced from their homes and among the 6.5 million internally displaced Syrians, 2.8 million are children.

Because of lack of medical assistance and the destruction of hospitals by bombs, one-third of children under the age of five do not have access to vaccinations.

Five children in 10 are out of school.

Of the 4.8 million refugees, half are children, according to statistics.

Most children suffer from post-traumatic stress disorder, as 79 percent of children in a refugee camp of 8,360 people have had a family member killed.

There is a Syrian generation confronting death before life. And a neighboring country shares everything with them.

The song, "Today I will not die," describing the feelings of Syrian refuge children should once more be listened to on Children's Day, especially by those who accuse Turkey with baseless accusations of being a dangerous place for children.
Last Update: Apr 25, 2016 1:04 am
RELATED TOPICS