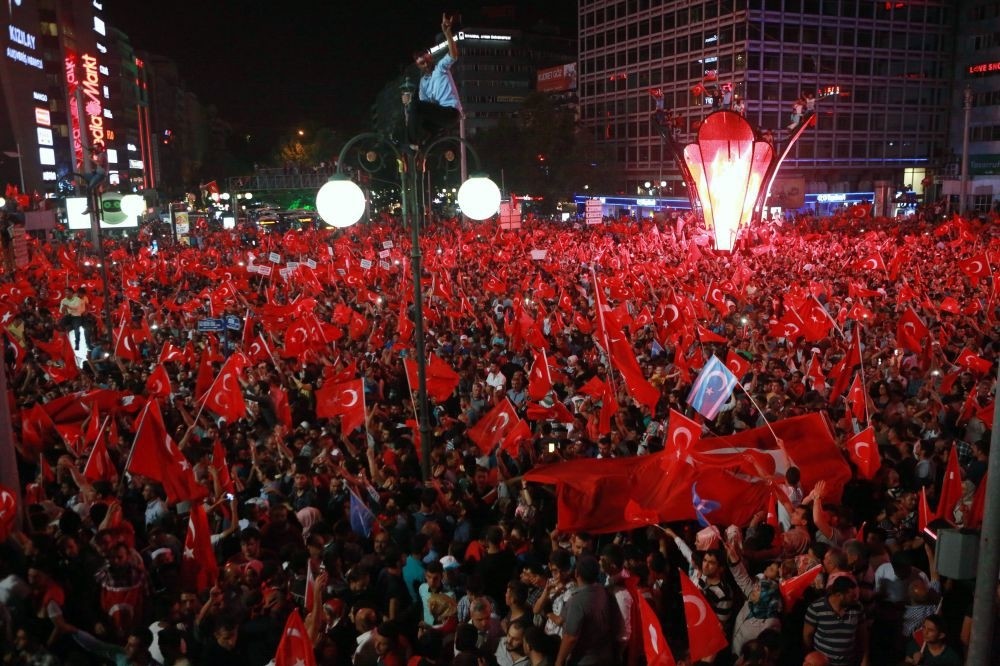 People waving flags as they celebrates in Ankara's Ku0131zu0131lay Square in support of the government following the failed coup attempt, July 16.
by Saadet Oruç Jul 18, 2016 12:00 am

Turkey has been going through some unbelievable days after an attempted coup put it on the world stage. It failed after a night of resistance on the streets by the Turkish people following the call made by President Recep Tayyip Erdoğan.

The history of humanity has not recorded dishonorableness like what was exhibited by the pilots that bombed their own Parliament and police.

The hotel where Erdoğan was staying with his family was bombed just minutes after he left for Istanbul.

Two of the president's guards were killed during the raid.

The initial targets were Erdoğan, Parliament and the state structure.

Even Ali Yazıcı, an aid-de-camp for Erdoğan, was believed to be involved in the coup attempt and he was taken into custody.

Putschists tried to find access at secret points within the state.

Turkey's police headquarters were targeted by Turkish jets in Ankara. Ankara's Akıncı Air base was the center of coordination for the coup. The headquarters of the military was bombed by helicopters. The Bosporus Bridge was occupied by soldiers and crowds were shot at by these dishonorable soldiers.

Erol Olcak, a top figure who organized many election campaigns in Turkey, and his 16-year-old son were among the resisting crowd and were killed.

These are perhaps the worst experiences any nation has faced, let alone Turkey. And our friends and partners have to show their supports at such a moment. The United Nations should condemn the failed coup attempt. The European Union should show its solidarity with Turkey. Western institutions should side with democracy in Turkey.The Gülenist terrorist network planned and conducted the coup attempt in coordination with different anti- Erdoğan circles within the military. Even the closest figures near the top of the military and administrative officials were involved in the attempt. According to initial information, the secretary of Chief of General Staff Hulusi Akar and his aide-de-camp forced the top commander to sign the coup perpetrators announcement. He faced violence from his own men after his refusal. He was kidnapped and transferred to Akıncı Air Base.

Other chiefs of commands, such as those of the Land Forces and Air Force had also disappeared, bringing the possibility of a kidnapping.

Key police points were bombed to cut supply for resistance to the coup.

The initial reaction of the Western press again reflected prejudice to the choice of the Turkish people.

My dear colleagues in the Western media, this is the key moment in the test of democracy.

A nation is passing through its worst days as its Parliament was bombed by its own jets and armored heavy vehicles and tanks were targeting civilians on the streets.

The world has never witnessed such a tragedy, which is again being overcome by the people themselves.

You should be objective and stand with democracy in Turkey. That is the time to show your humanity.
Last Update: Jul 18, 2016 3:56 am
RELATED TOPICS