Turkey looks for ways to save Mauritania and others from colonization 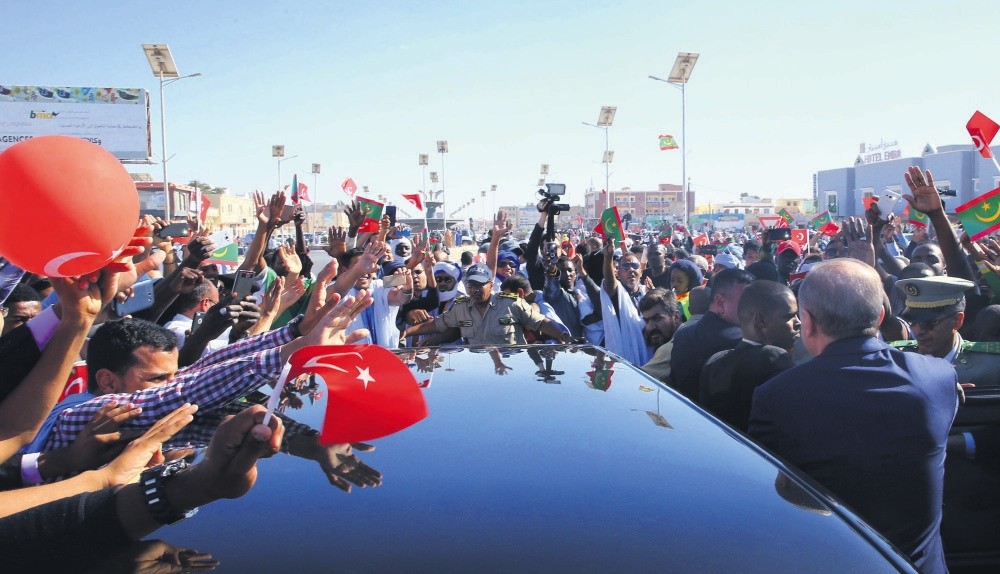 Turkish and Mauritanian security officers and people surround the car of President Erdou011fan (R) as he gestures during a welcome ceremony at the airport in Nouakchott, Mauritania, Feb. 28.
by Saadet Oruç Mar 02, 2018 12:00 am

Turkey, under the leadership of President Erdoğan, is extending its hand to African countries to save them from Western colonization

I am writing this article from Senegal, which is the third stop of the president's visit, and I am still sad from the views in Mauritania, the second country Erdoğan visited this time. Mauritania, which has rich mines, natural reserves and fishing, is undeveloped and poor. This is because the more wealth a country has in terms of mines, hydrocarbons and natural reserves, the poorer it was left by colonialist states in previous centuries.

The official convoy was welcomed with joy and lots of applause by Mauritanians on the streets, which absolutely need to be rebuilt. While there are no traffic lights or order to the traffic; there are camels near the streets of the capital city. On first glance at the poor country, you can see the urgency for enhancing projects for infrastructure and development of the city, without any hidden plans to absorb its natural reserves.

This is why to reconstruct the country together is the motto of Turkey's vision for African states. The shop signs written in French are also a sad mark of the country's colonization, just like the presence of French culture and language in Algeria. Without leaving any sign of development, they just left their language. A heartbreaking sign of a traumatic colonization, a crime even they themselves, the French leaders, are confronting today.

However, Turkey would like to take its part together with African countries while a new world order is being formed, as Erdoğan said at a press conference in Nouackchot, the Mauritanian capital.

While I am writing this article, Erdoğan is having official meetings with Senegalese officials. And while you are reading this article, the presidential delegation will be leaving Senegal for Mali. A warm touch of Turkey's solidarity with African people is taking place in different parts of the continent. This is an unprecedented development in today's world while colonization is happening all around the world.