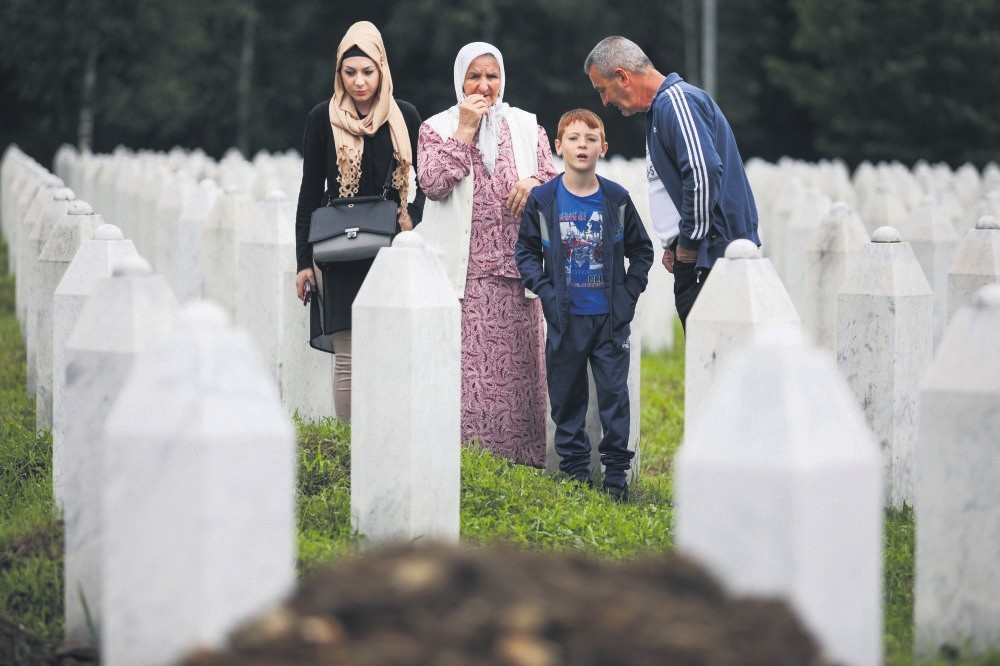 People look at a fresh grave prepared on the Potocari Memorial Center in Srebrenica, Bosnia and Herzegovina, July 11.
by Saadet Oruç
Jul 12, 2018 12:00 am

More than 8,000 innocent Bosniaks were killed during the massacre committed by Serbians with the clear collaboration of the Dutch-led United Nations mission on the dark days of July 1995 in the town of Srebrenica. On July 11, we witnessed the 23rd anniversary of the Srebrenica genocide. The inhumane massacre, which happened on European lands, was the second large-scale attack against humanity following the Holocaust at the end of the World War II.

Today's conditions on the European continent in relation to the rights of "others" in that "modern part of the world" are similar to the Srebrenica era as well as the horror scenarios of the Nazi era during World War II. Thousands of immigrants are losing their lives each year because of the discriminatory policies of the EU states. Millions of refugees are being forced to stay away from the borders of leading EU states, while every year thousands are being left to die on the Mediterranean Sea as well as near Aegean coasts.

Xenophobia and racism have reached their highest levels where a constant period of massacres and crimes against humanity are observed. The Srebrenica massacre took place in an area declared safe by the United Nations, destroying the confidence of the public in the U.N. system. The Netherlands, then, was as criminal as the perpetrators of the Srebrenica massacre as its soldiers stood silently by as some 8,000 people were killed by Serbian forces. It should be noted here that this was systematic murdering, a genocide of Muslims in the heart of Europe. They were murdered because of their identities; a clear step to mark the continuation of Nazism throughout Europe.

That darkest page in the history of the Balkans as well as Europe was officially called "genocide." However, it does not matter that the genocide has since been officially recognized as such because the ethnic cleansing went unpunished following Srebrenica. Muslim women were attacked deliberately and sexually. Thousands of women were raped in the framework of a systematic policy of war.

Ironically, the 23rd anniversary of the Srebrenica genocide coincided with the announcement of the court decision concerning the massacre of Turkish and other foreign-origin persons in Germany committed by the far-right racist group National Socialist Underground (NSU). Srebrenica or the NSU, the names may change but the old bad habits of the West remain the same.