The Turkish peace operation in Cyprus, 44 years on 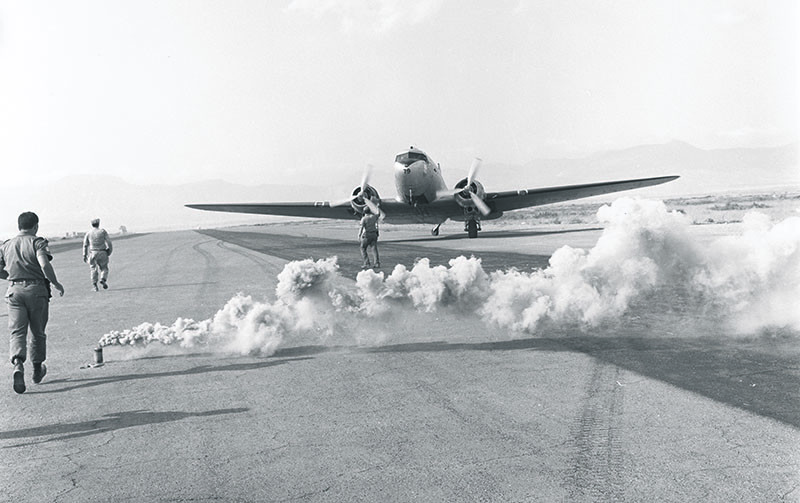 A Turkish plane prepares to take off to northern Cyprus as part of a military offensive launched by the Turkish Armed Forces to provide security for the people of the island, July 1974. (AA Photo)
by Saadet Oruç Jul 21, 2018 12:00 am

Turkey marked the 44th anniversary of its military operation conducted to protect northern Cyprus's Turkish population yesterday. All in the country and island commemorated the success and importance of the Turkish peace operation by holding ceremonies and concerts. However, the decision-makers of the global powers, who are still far away from a broad vision and wisdom for the sake of the people on the island and also for stability of the Mediterranean, ignored the anniversary of the operation. The July 20 Peace and Freedom Day in the Turkish Republic of Northern Cyprus (KKTC), which commemorates Turkey's "Cyprus Peace Operation" in 1974, can be defined as the anniversary of a significant regional turning point, having changed the fate of the island and its coastal developments.

After 1974, the notion of peace became a reality on the island in the aftermath of Turkey's operation which put an end to the violence committed by Greek Cypriots on the Turkish part of the island. The United Nations and the European Union as well as other leading powers lost the moral ground with regards to their handling of the Cyprus issue, ignoring the island's reality. They always used the issue as a bargaining tool or a trump card in their negotiations with Turkey and refrained from generating or contributing tangible and effective solutions to end the problems. It should be noted here that the problem stayed unresolved due to the partial position of Western institutions. For example, the EU recognized the Greek administration of Cyprus as a full member of the union and poured oil on the fire over the island.

For years, there has been an attempted isolation of the KKTC and the Turkish Cypriots by the international community, which broadens the deadlock in the situation. Moreover, the hydrocarbon resources on the shores of Cyprus have recently become a factor which particularly deepens the crisis, as many countries try to take power in controlling the above mentioned reserves. Many alliances, such as Greece-Greek part of Cyprus-Israel or Greece-Greek part of Cyprus-Russia or Greece-Greek part of Cyprus-Egypt have beenmentioned without any stop. Turkey's and the KKTC's sovereignty rights have constantly been denied. Additionally, steps are being taken by the international community to play with the fault lines of the KKTC.

Alliances are being sought inside the Turkish part of the island to "get the castle" with the help of internal counterparts. And of course, these attempts fail. The latest attempt to reunify Cyprus ended in failure in 2017 after two years of negotiations. And a critical question is being asked at this point: Do the international powers really want a solution for the island or is a deadlock the real preference of the world powers for this part of the globe?