Erdoğan's visit to Africa and the new approach of Turkish diplomacy 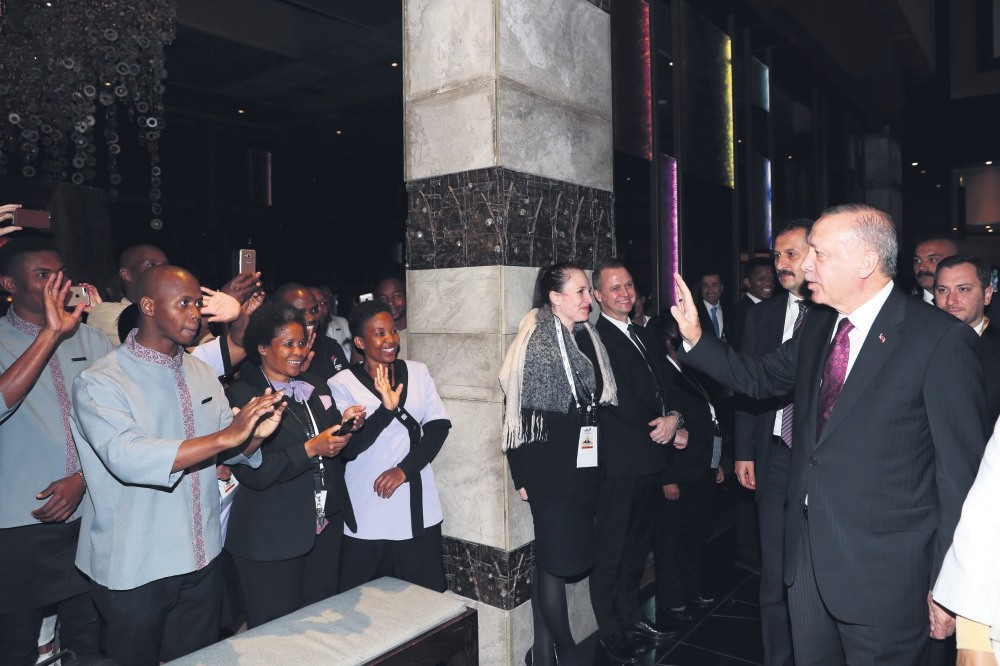 President Erdou011fan enters the hotel where he will stay during his visit to South Africa, Johannesburg, July 24.
by Saadet Oruç Jul 27, 2018 12:00 am

Contrary to the colonialist policies of the West in Africa, Turkey promises interest-based partnerships with its African allies

I am writing this article in a bus on our way from Johannesburg, South Africa to Pretoria, where the Turkish Embassy residence will be inaugurated. President Recep Tayyip Erdoğan, who is at the term president of the Organisation of Islamic Cooperation (OIC), has been invited for the summit of BRICS – the abbreviation of the capital letters of Brazil, Russia, India, China and South Africa.

As Europe and the United States pass through their deepest fault line to date, because of the distance created by U.S. President Donald Trump for his European colleagues, BRICS stands as a rising power at global level. No matter if President Trump and EU Commission President Jean-Claude Juncker gave a picture of consensus following their recent meeting in Washington this week concerning the tension on the mutual trade issues, it is apparent that the Western bloc is at its weakest level for overcoming its difficulties, crisis.

In the light of its policies of diversification, Turkey, meanwhile, establishes strong relations with all parties due to its interests. And of course, its vision vis-a-vis Africa has a lot to contribute to the countries who would like to be present on the continent. With the change in its governing system from the parliamentary system to a presidential one, Turkey has entered into a new era, and its foreign and diplomatic policies will be shaped accordingly.

President Erdoğan is determined to grow and improve Turkey's ties and importance in the international community by strengthening ties with allies. Turkey is heading to adopt a more active role and develop cooperation. However, for example, contrary to the colonialist policies of the Western countries for Africa, Ankara, under the leadership of President Erdoğan, promises interest-based partnerships with its African allies.

Following the change of system in Turkey, not only Africa policy but all foreign policy issues will be handled in a stronger manner. As we already see in President Erdoğan's Africa tour, the new way of following influential diplomatic policies has started.

In brief, a new page has been opened in Turkish politics, particularly in foreign policies. A majority of the crises and problems will be resolved with new wisdom. For example, following its discriminatory policies during Turkey's April 16 referendum process, the Netherlands, finally, came to a new phase and ties will be repaired with Turkey. More examples will follow the Netherlands.

Turkey's new page represents a new model and wisdom, taking its energy from the last 16 years with the governance of the Justice and Development Party (AK Party) and President Erdoğan, and this is true of its foreign policy as well.