Turkey's plan on the refugee deal leaves EU under stress 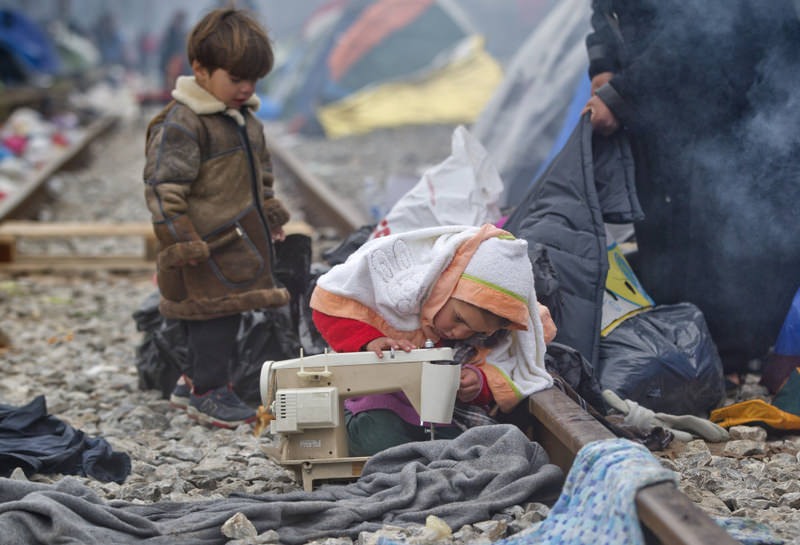 A child plays with a broken sewing machine on railway tracks at the northern Greek border station of Idomeni near the Macedonian border.
by Sadık Ünay Mar 12, 2016 12:00 am

Having singlehandedly shouldered the hefty burden of the refugee crisis triggered by the Syrian civil war and the following flow of millions of migrants to Europe as both a transit and target country, Turkey has finally run out of patience and started a sharp diplomatic move that could potentially end illegal migration for good. First, President Recep Tayyip Erdoğan warned EU leaders that Turkey could easily lift all restrictions and transport refugees to European borders unless EU governments deliver their previous promises of assistance for the welfare of refugees. He rightly underlined that Turkey had already sheltered around 3 million Syrian refugees on humanitarian grounds and European leaders had no right to criticize Ankara for border security without completing their homework first.

Then came the long day in Brussels during which the Turkey-EU summit was dominated by Ankara's surprising proposals to undertake extra responsibilities to interrupt the flow of illegal refugees, but extract important concessions regarding financial backing and acceleration of Turkey's EU accession process in return. These brave proposals were widely hailed by most EU leaders as a game changer in the complicated international politics of the refugee and migrant crisis, and the EU leaders seemed to come to understand that they need to treat Turkey as an equal and respected partner in order to stand a chance of solving their most urgent problem. From another angle, having lost some of its subtle touch and soft power capacity for some time due to the intensification of military conflicts in the surrounding region and widespread terrorist attacks within its borders, Turkey began to display initial signals of diplomatic proactivism with a play-maker attitude concerning the proposed refugee deal.

Ankara confidently offered a give-and-take package by pushing the EU leaders to accept measures such as renegotiating the customs union, faster visa liberalization for Turkish citizens, opening additional chapters in the EU accession process and doubling EU support for refugees in Turkey to 6 billion euros in return for taking back all the refugees from Greece who made the dangerous journey to the islands in the Aegean. The offered deal stipulates that EU countries would accept one legal refugee from Turkey in return for every illegal migrant taken back. Obviously, there might be legal complications regarding the implementation of collective population transfers as reminded by the U.N. refugee agency. And at a time when xenophobic and ultra-nationalist movements are gaining ground, not all EU members are overly enthusiastic about accepting Muslim refugees.

But whatever the outcome, Turkey showed diplomatic resolve, creativity and tenacity in order to propose a progressive solution to a major humanitarian crisis threatening Europe's regional security and social structure for which national governments have done next to nothing so far. Following the Brussels summit, the ball is now firmly on the side of the EU and the capacity to reach a common road map for the solution of the refugee crisis might be one of the best indications of the EU's future as a united and prosperous entity. German Chancellor Angela Merkel has a week until the next summit on March 18 to convince EU leaders to accept the package, and the issue might be yet another test for her political leadership across the EU.

It seems crystal clear that the main axis of Turkey-EU relations will be determined by the transformation trajectory of the refugee issue and the degree of collaboration that can be achieved to ameliorate its consequences. Therefore, it is totally unfair to accuse Ankara for dehumanizing the refugee issue and using it as a bargaining chip to accelerate protracted accession negotiations. Instead of maintaining a principled but defensive position based on providing extensive socio-economic support despite absence of any substantial Western support, Ankara rightly decided to switch to a proactive stance and force the EU to shoulder some of the responsibility. In the current international conjuncture dominated by the flow of migrants into Europe and humanitarian catastrophes on the Aegean, it is both legitimate and wise to press EU leaders to undertake responsibility for the well-being of refugees while demanding the acceleration Turkey's EU accession process as a sign of strategic partnership.