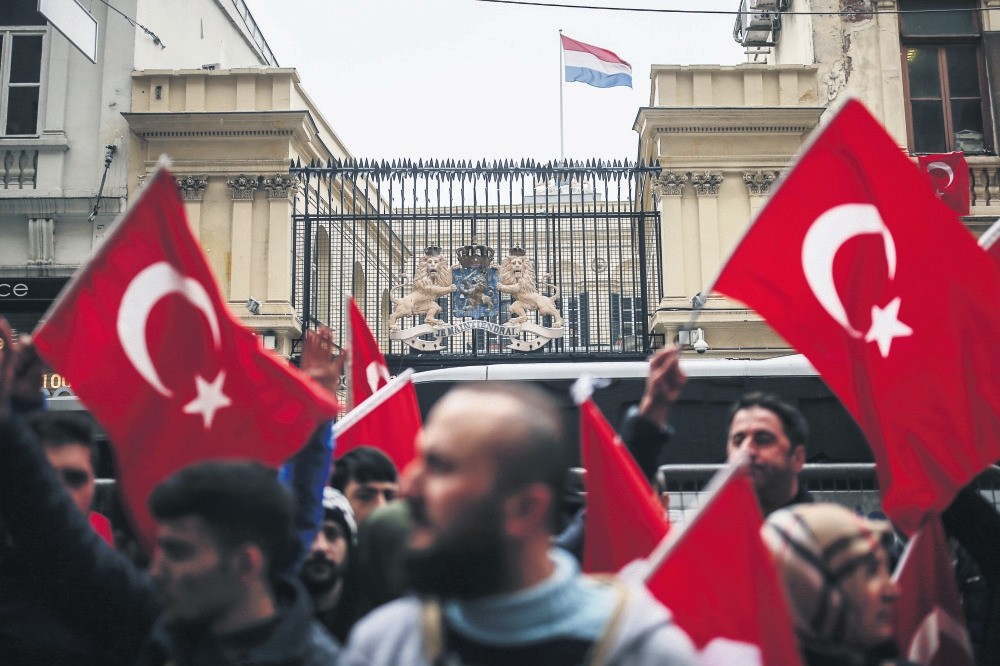 A group of Turkish people protesting the Dutch police's treatment of a Turkish minister in Rotterdam, outside the Dutch Consulate in Istanbul, March 12.
by Sadık Ünay Mar 18, 2017 12:00 am

The U.K.'s Brexit episode set a useful precedent for Turkey's future mode of engagement with Europe

The latest chapter in Turkey's long-drawn initiative for EU accession saw a dramatic twist last week when the world witnessed the shocking attempts by European leaders to intervene in Turkey's campaign for the forthcoming referendum.

While the country's domestic political agenda has focused primarily on the future outcome of the April 16 referendum regarding the country's transition to a presidential system, Germany and the Netherlands made a series of curt attempts to block Turkish political campaigns for the "yes" vote in those countries, both of which have a large community of Turkish nationals. Tensions have risen considerably, reaching their height when Dutch security forces physically blocked the Turkish Minister of Family and Social Policies Fatma Betül Sayan Kaya from entering the country, escorting her to the German border in a completely unacceptable and humiliating manner.

President Recep Tayyip Erdoğan rightly described the attitudes of the Dutch as "remnants of Euro-fascism" and denounced the coordinated attempts against Turkish politicians and non-governmental organizations (NGOs) across Europe. The carefully choreographed spat with Turkey helped bolster Dutch Prime Minister Mark Rutte's election campaign in his party's bid to cling to power while sending a clear political signal to voters sympathetic to anti-Turkish and anti-Islamic sentiments, xenophobia and the extreme far-right agenda of Geert Wilders. However, in the long-term, broadened perspective, the latest political crisis between Turkey and key players in the EU might have exerted irreparable damage in Turkey's aim for EU accession.

The real implications remain to be seen in conjunction with the new political configuration in Ankara that will emerge after the referendum. Throughout Turkey's political history during the Republican period, maintaining the process of Westernization in social, legal and institutional realms, as well as pursuing deep integration with Europe, have been defined as irreplaceable strategic goals. In that respect, EU membership was defined as the zenith of Turkey's endeavor to join the ranks of the Western world as an equal, respected member that represents a predominantly Muslim society. Many political analysts, intellectuals and observers interpreted Turkey's prospective EU membership to be a critical development that would contribute to further dialogue and interaction between civilizations, contributing to global peace and harmony over the course of the 2000s.

Yet, the explosion of Arab revolutions, the unravelling of the refugee crisis in the bloodbath of Syria's Civil War and the rise of neo-protectionism and far-right extremism in the wake of global crises - as well as the shock of Brexit - caused the tide to turn so abruptly that the course of world history now hangs in the balance.

Since the reversal of the Arab Spring, Turkey has been forced to use substantial hard power to fight off existential challenges stemming from failed states across its borders along with the domestic terror threat; counter to the integrative inclinations of her European neighbors. As the EU gradually lost its statute as a major actor in global politics in the wake of the Syrian War, Ankara had to constantly conjure up bilateral deals with the U.S. and Russia to meet the grave security challenges spreading from Syria; while overcoming the heavy financial and humanitarian burden of hosting 3 million Syrian refugees.

The acute failure of the Refugee Deal due to the EU's excess of pragmatism and unreliability further alienated Turkey, while strengthening the country's reflexes to act as a single-minded emerging power on the daunting geopolitical stage of the Middle East. When Gülenist Terror Group (FETÖ) members within the Turkish army attempted to stage the bloody military coup of July 15, the EU stood silently watching, awaiting the outcome from a distance and sparing the world of any cool headed, diplomatic statements in support of the democratic regime.

Amid the frozen EU accession negotiations and 16 of the 32 chapters blocked via the reserves of the EU Commission and certain members, the attempted removal of Turkey's president under a violent military coup was tacitly approved by the EU as well as the U.S.

Therefore, long before the latest political crisis over the critical referendum campaign, institutional collaborations between Turkey and the EU were on a tightrope. With Turkey's renewed geostrategic rapprochement with Russia over policy coordination in Syria and strategic security cooperation including the purchase of S-400 air defense systems in the cards, clear signs emerged concerning a radical redefinition of the relations with the EU and possibly NATO. European leaders have only themselves to blame for Turkey's new strategic orientation which is based on seeking alliance options in the East and the West in specific policy areas.

The Brexit episode set a useful precedent for Turkey's future mode of engagement with Europe. At a time of rising geopolitical tensions around the globe and the extreme rise of nationalism in Europe, it might be wiser to restrict relations to the economy and give up on the futile hopes for political-institutional integration.
RELATED TOPICS