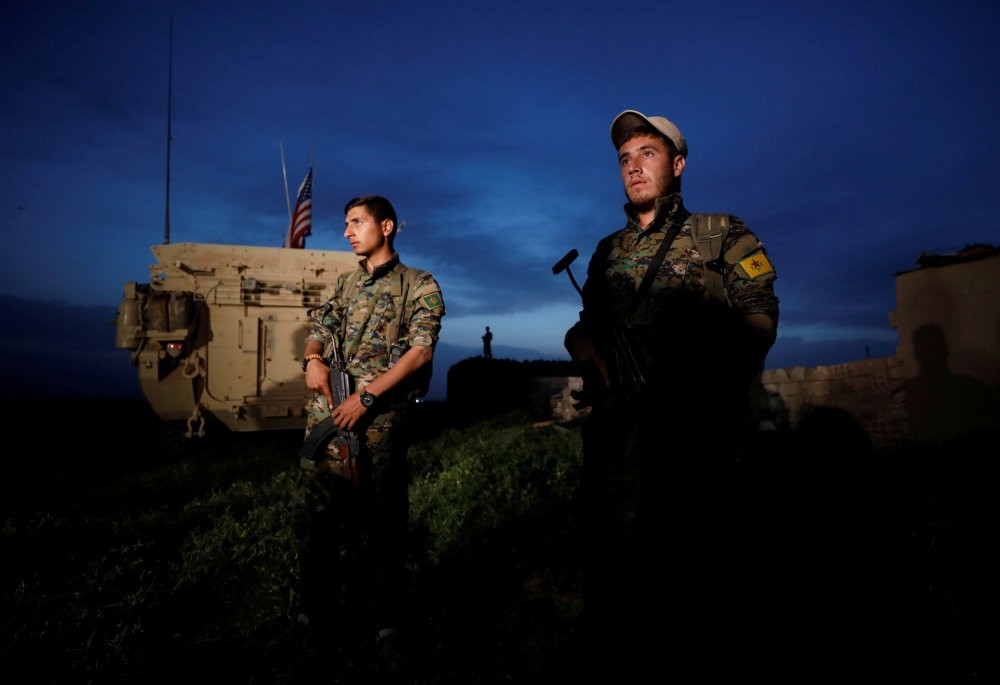 Militants from the Syrian Kurdish terrorist group of the YPG standing near a U.S military vehicle in the town of Darbasiya near the Turkish border, Syria, April 28. (Reuters Photo)
by Sadık Ünay May 13, 2017 12:00 am

There was a brief period of premature optimism in Turkish public opinion following the election of Donald Trump as American president that bilateral relations between Turkey and the U.S., which had reached historic lows during the Obama administration, might somehow be restored in the new era. The main argument of the optimists relied on the presumption that the Obama administration, following the conventional approach of the Democrats, was trying to lower the costs of international military operations by working with proxy powers such as the PKK's Syrian offshoot, the People's Protection Units (YPG), in Syria. But President Trump was supposed to restore a more conventional foreign policy and military strategy regarding the Middle East. There was hope that he would prefer to work with unitary states, rather than supporting paramilitary, or terrorist, groups on the ground at the expense of valuable allies. It seems that the air of optimism is rapidly fading as the "American deep state" has already captured Trump's vision on the precept that the only feasible way to fight the challenge of Daesh is militarily supporting the YPG in northern Syria.

It was psychologically painful for Ankara to witness the American president sign the decision to provide the YPG with heavy weapons on the very day that a high-level Turkish delegation comprising of Turkey's Chief of Staff, the presidential spokesperson and the head of the National Intelligence Agency were in Washington for a preparatory visit before the two president's first face-to-face meeting scheduled for next week. The strategic divergence between the two key NATO allies regarding Syria is beginning to reach dangerous levels as the U.S. openly supports YPG forces via training, logistical support and heavy weapons, despite their clear affiliation with the PKK. Turkey has been fighting the PKK for over four decades with a heavy human cost of 40,000 innocent civilians and security forces, while billions of dollars were spent in the process.

Turkey officially considers the YPG in Syria a direct offshoot of the PKK terrorist organization, as the Turkish security forces keep recovering terrorists, weapons and ammunition that have been transferred from the YPG to the PKK in various operations. Moreover, some of the suicide bombers who perpetrated attacks in Turkey's cosmopolitan centers were trained in YPG-held territories in Syria, not to mention, the occasional shooting attacks by the YPG sharp shooters on the border against Turkish security forces. Therefore, as far as Ankara is concerned, the status of the YPG and those international forces that strategically support the group is quite clear.

That is why, when Operation Euphrates Shield was conducted by the Turkish military to increase border security, form a safe zone for the Syrian civilians and to constitute a buffer against Daesh, one of the paramount strategic goals was to interrupt the formation of a YPG corridor in northern Syria along Turkey's borders. Yet, despite all the evidence presented to them, the American administration stubbornly refuses to define the YPG as a terrorist force simply because of the pragmatic calculation that the secular Kurds around this organization might constitute the useful tool in the U.S.'s influence on the future of Syria. The sharp continuity between the Obama and Trump administrations in this regard is truly interesting. There are even speculations that the U.S. wants to utilize the YPG's influence in northern Syria as a bargaining chip in the case of a potential disintegration of the country, which it believes could trigger a secular pan-Kurdish movement claiming to bring Kurds in northern Syria, northern Iraq, Southeastern Turkey and Iran under a new political roof in the long term. However, these might just be "speculations."

But the facts are that American indifference toward Ankara's strong demands concerning the isolation of the YPG creates deep disappointment and frustration in Turkey and works to stimulate strong anti-American sentiments among the general public. As such, there were calls from various political circles for the cancellation of President Recep Tayyip Erdoğan's upcoming visit to Washington. As for now, Erdoğan is acting like a levelheaded statesman in an effort to resolve the current conflict and to convince the White House to reverse their policy toward the YPG. Globally, Erdoğan is known for not being the kind of politician who gets pushed around, and his patience on the YPG issue is running out. The American strategy in Syria continues to juxtapose the fight against Daesh with its active support of the YPG to extend its spheres of influence over the Syrian-Kurdish militants, a strategy that is in direct contravention of Turkey's national security interests. If the U.S. continues to support the YPG despite the categorical opposition of one its most important NATO allies, Turkey might have to make irreversible unilateral decisions. In the end, no one would be in a position to blame Ankara for the undesired outcomes that might follow.
RELATED TOPICS