On the eve of the great transformation 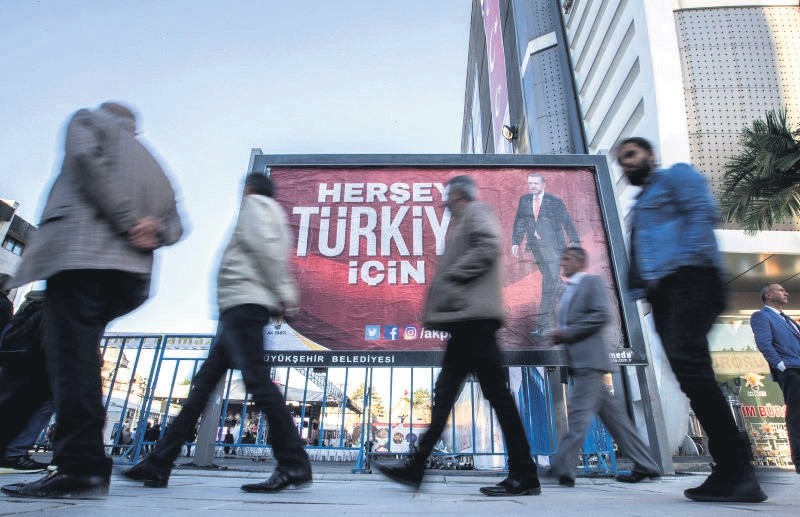 These are historic days for Turkish democracy as the country braces for a paradigmatic transition toward a leaner, more efficient and productive mode of public governance via the presidential system. As the Turkish electorate prepares to cast their votes Sunday in one of the most critical and fiercely fought elections in recent years, Turkey's decades-long socioeconomic and political transformation is set to transition to a higher level. As the founder of the Justice and Development Party (AK Party), President Recep Tayyip Erdoğan has been the most dominant figure in the political arena throughout the first 15 years of the 21st century as prime minister and president. Successive governments formed by him have acted as carriers of a substantial physical and systemic transformation process via massive infrastructural investments, health and education reforms, democratization initiatives and global integration drives. Turkey has also excelled as a virtuous power providing humanitarian support and conflict resolution assistance throughout the Muslim world and across the least developed countries.Turkey's progress has continued despite periodic lapses in its transformation impetus caused by domestic attempts to destabilize the country via the Gezi movement, the July 15 coup attempt, PKK terrorism and volatile shocks, such as the global economic crisis, the Arab Spring and civil wars in neighboring countries such as Iraq and Syria. But every time Turkey's strong drive toward democratic consolidation, socioeconomic development and structural transformation to galvanize its position as a major emerging power was in grave danger, Erdoğan's unwavering and charismatic leadership helped to pull the country together again and launch another attempt to become a player on the global chess board. Frequent reactions from the Western world to Turkey's newly found policy autonomy were channeled into media campaigns trying to vilify Erdoğan as a dictator and portray his political adversaries as freedom fighters – a view fiercely rejected by the Turkish electorate's majority.

Incidentally, the excitement surrounding the upcoming general and presidential elections derives from the fact that Turkey stands on the eve of yet another great systemic transformation under Erdoğan's leadership. This time around, in line with the requirements of the new system, he is looking to receive over 50 percent of the vote to get elected as president and the AK Party will strive to establish a parliamentary majority with its ally the Nationalist Movement Party (MHP). There are varying estimates coming from the pollsters depending on their political/ideological standing, but our humble opinion is that as "the master" of great election victories, Erdoğan will have no problem reigning in enough democratic support for the new presidential government system. In our latest column, we stressed that major institutional reforms will be undertaken in the architecture of macroeconomic management by reducing the number of ministries and clarifying the division of labor among bureaucratic agencies to establish a much more efficient political mechanism. We also indicated that these institutional reforms are vitally important both because Turkey is going through a rough patch alongside other emerging economies in the wake of interest rate hikes by the Federal Reserve (the Fed); and continued success in economic development and structural transformation constitutes one of the most important elements of sustained legitimacy in Turkish politics.All things considered, the new institutional design proposed by Erdoğan reaffirmed our expectations that the paradigmatic transition in the state mechanism toward administrative rationalization along with the contraction of the ministries and bureaucratic agencies will be congruent with the requirements of international competition. Several ministries operating in similar sectors will merge, various bureaucratic agencies will be directly connected to the office of president and new specialized councils and offices will be formed in the new system to facilitate the sharing of policy-related knowledge, achieve better coordination among the stake holders and better civil society-expert involvement in both policy formulation and implementation. The new macroeconomic management model will be established on three main pillars: Finance, industrial production development and domestic-international trade. Therefore, instead of six ministries managing these issue areas, we will have the Finance and Treasury Ministry, the Industry and Technology Ministry, and the Trade Ministry. These integrated ministries will be joined by a new Agriculture and Forestry Ministry and an Industrial Relations and Social Policies Ministry. The new ministerial profile, based on 16 ministries instead of the previous 26, will be supported by specialized councils focused on local governance, social policies, health and education, legal reforms, national security, macroeconomic management, culture, and science and technology plus there will be presidential offices for investment promotion, finance, digital transformation and human resources aiming to improve both the speed and efficiency of policy formulation in the new system.

Granted, every governing system needs some fine-tuning before it reaches its perfect state, but this is the first time in the history of Turkish democracy that a lean and rational bureaucratic framework will be established to smoothly reflect the will of democratically elected political actors into various policy areas. The launch of the presidential system following the June 24 elections will pave the way for a new chapter in Turkey's quest to become a democratic, dynamic, fast-acting emerging power with a robust economic and technological infrastructure. We are proud to witness such great systemic transformation set to eliminate structural sources of civil-military bureaucratic tutelage for good.