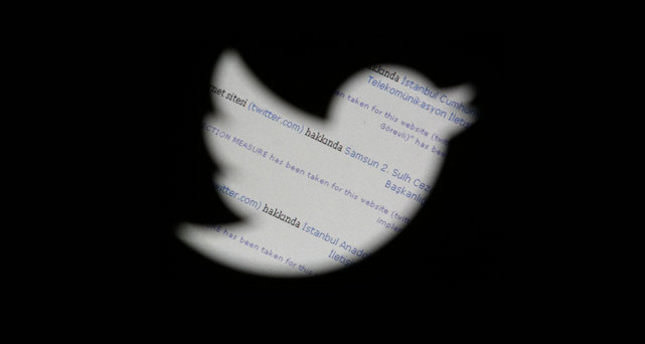 by Taha Meli Arvas Mar 25, 2014 12:00 am
The recent blockage of access to Twitter in Turkey by a court order has been reported on extensively in Turkey and the global media, yet all reports have missed the true story and ignored basic facts.

Some reports have cried censorship, some have praised the move as nationalistic, and some have called the move undemocratic. In an election cycle with much to be lost and much to be gained, all stories need to be taken with a grain of salt, so I will review what we know for certain and let you draw your own conclusions.

Twitter is a U.S.-based company that employs 3,000 employees that has signed up over 900 million users, with about 650 million users dropping the service since its inception, leaving about 250 million active users. Twitter at its peak was worth about $40 billion at the end of 2013 and now is down 33 percent to about $28 billion in the last three months. Its current market cap makes Twitter worth about twice as much as the most valuable public Turkish company and makes it worth about 10 percent of the top 100 Turkish companies combined.

Turkey is the seventh largest market for Twitter with an estimated 10 million users who have signed up to use the service.

The current suspension of Twitter is said to have been ordered by a local Turkish court because of a now infamous defamation complaint by a woman in the city of Samsun. She claims a fake account under her name was set up and subsequent links to indecent pictures of someone other than herself were broadcast on Twitter meant to smear her. The woman complained to Twitter to have the account closed but to no avail. Twitter says they only take action once the necessary forms have been submitted properly but despite being a $28 billion company, Twitter was unable or unwilling to pay someone to translate these pages into Turkish, a language spoken by over ten million of its users. The woman filed a complaint, won in court, an English translation of the court order was sent to Twitter, but Twitter did not respond. No refusal, no objection, no acknowledgement of the court order, no response whatsoever. Complete and utter silence. By refusing to have a physical presence in Turkey, Twitter may have thought it would be immune from the laws governing its ten million Turkish users.

Hours after Twitter was shut down in Turkey, President Obama met with top executives of Facebook, Google, and other technology companies to listen to their complaints about U.S. government intrusion into their businesses. Facebook CEO Mark Zuckerberg had voiced his frustration at "the repeated reports of the behavior of the U.S. government" in the days leading up to the Friday meeting at the White House. Zuckerberg went on to say that Facebook was working on security meant to protect its users against "criminals, not our own government." A press release from the White House after the meeting mentioned Obama's "commitment to privacy and basic liberties" in the face of recent allegations that these basic liberties were being ignored.

Some Turkish media organizations have mentioned the thousands of court orders directing social media sites to release information to the U.S. government and censor users, however, none have reported that these numbers are not definitive. In fact, companies can not disclose whether or not they have been ordered by a court to release confidential information and in some instances, they can be ordered to release information without any court supervision. Even disclosing that they have received such a letter termed a National Security Letter is a crime. This means that although we know of thousands of users whose privacy has already been violated, there may be hundreds of thousands of more users that we are not being told of. Not abiding by any U.S. court order, whether it is a local court, district court, or a higher-level court would lead to a contempt of court penalty and the responsible parties at these companies would face jail time. Freedom of speech protection does not guarantee the ability to ignore court orders in the United States.

In Apple's most recent annual report, the company states, "At the time of this report, the U.S. government does not allow Apple to disclose, except in broad ranges, the number of national security orders, the number of accounts affected by the orders, or whether content, such as emails, was disclosed." This disclosure is echoed in the transparency reports of Google, Twitter, Dropbox, Yahoo, and Netflix among other major tech companies. Free and unfettered access to the Internet without consequences and without exception are myths schoolchildren are taught in elementary school, the facts do not support these myths.

To think that countries do not have national security issues and the need to investigate them using all tools at their disposal would be naive. Recently U.S. Senator Diane Feinstein complained that U.S. intelligence agencies had hacked her computers and the computers of the other members of the Senate Intelligence Committee, which she chairs. Feinstein was quoted as saying, "The CIA just went and searched the committee's computers." Feinstein said a search of confidential committee documents may have been criminal and unconstitutional and Senate Majority Leader Harry Reid ordered an investigation by the Senate's sergeant-at-arms.

The facts of the Twitter case are plain and simple. Twitter purposefully and willingly ignored the wishes of Turkish court-orders and as the Prime Minister Recep Tayyip Erdoğan, ordered the administrative branch of government to "do what is necessary." This quote has been mistranslated in many foreign media outlets including the Associated Press and Bloomberg News as "shut down Twitter."

Ironically, Bloomberg News editor-at-large Ben Richardson resigned Monday over allegations of journalistic censorship at Bloomberg relating to graft allegations in China, the same day that news outlet misquoted Prime Minister Erdoğan. Richardson said in announcing his resignation, "I left Bloomberg because of the way the story was mishandled, and because of how the company made misleading statements in the global press." Bloomberg News buried the graft story Richardson alleges in order to appease Chinese government officials so as not to jeopardize Bloomberg's profitable terminal business in the second largest global economy.

What have we learned from this review of recent events?

Twitter ignored Turkish court orders and perhaps thought its $28 billion value would exempt it from compliance.

Twitter acknowledged its mistake Monday as it ultimately complied with the court order after the site was blocked.

Twitter and other U.S. social media companies face constant intrusions and invasions of privacy by U.S. courts but fully comply with the rule of law despite their protests. The U.S. government claims these invasions of privacy are necessary to safeguard homeland security and even Congressional oversight committees are not immune from such invasions of privacy. If a $28 billion dollar company is unwilling or unable to translate a few pages of text into Turkish, it should be no surprise that global media outlets may have the same problems in translating the Prime Minister's remarks into English.

To think the Prime Minister is not aware that this blockage could be circumvented would be a deep underestimation of him. Blocking Twitter put all other online companies on notice, lack of physical presence does not imply lack of responsibility. The "undecided" vote in Turkey is currently under half a percent and a temporary ban on a social media site will not sway any votes in either direction. If blocking Twitter is indeed "undemocratic" the opposition should win the elections handing Erdogan his first defeat, if however he wins, what could be more democratic than an election renewing the mandate of the AK Party?

Finally, the very news agencies that complain about Turkish government censorship, may be censoring their own employees when they have a vested interest in the news they claim to objectively report.
Better make that a few grains of salt...