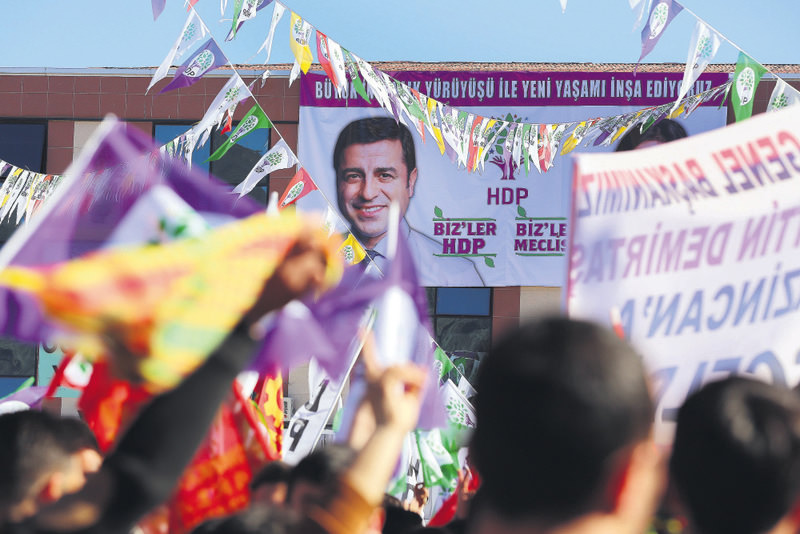 Much like the claim of Kemalism to reform the Islamic faith, the Kurdish political movement nowadays reflects a similar mindset with its pledges such as abolish the Presidency of Religious Affairs and high school religion classes

The Peoples' Democratic Party (HDP), a marginal movement whose platform primarily consists of the Kurdish question, is pursuing an outreach campaign ahead of the June 7 parliamentary elections. The party's campaign strategy, however, imitates the Old Turkey's establishment's reflexes to further limit its popularity. For many HDP elites, though, the current process merely represents the coming clear of their underlying ideas. Those who are familiar with the PKK's ideology probably cannot understand why the HDP's election campaign strikes others as surprising. As a matter of fact, there is nothing incomprehensible about this primitively positivist, Eurocentric, neo-Kemalist group pushing their interpretation of religion to the point of nihilism. One of the most controversial aspects of the 2015 election campaign has been the ongoing debate on the Presidency of Religious Affairs (DİB). The HDP seems fixated on this issue for two reasons. First, to mobilize the Alevi community and second, to reflect the secular fundamentalism of the Kurdish political movement in their discourse. What, then, does the HDP leadership's call to abolish the DİB and high school religion courses represent? A high-risk campaign pledge? And how does the above-mentioned pledge relate to the HDP's special interest in gay rights? Can we use the campaign strategy to identify the HDP's political and sociological position?

In all fairness, the pledge to abolish the DİB and high school religion courses means absolutely nothing to the vast majority of Turkey's Alevis. The target audience, in turn, has encountered similar campaign pledges before. As such, we cannot speak of an original pledge whatsoever. The state's relations with religion, which the Kemalist elites redesigned to keep society under control, underwent a process of transformation during the Justice and Development Party's AK Party time in power. The DİB, in turn, came to be perceived in a different light as the institution started to relate to religious Muslims in a more natural manner. Unable to accurately interpret these processes, the HDP leadership lost touch with the reality on the ground. Much like the claim of Kemalism to reform the Islamic faith, the Kurdish political movement nowadays calls for the aforementioned steps. What, then, is the point of making such campaign pledges provided that the majority of HDP voters are more religious than the average citizen? It would appear that they care more about the secular fundamentalism of their leaders than the concerns of their voters. It is possible, they think, to counterbalance negative reactions from the electorate with frequent reminders of past injustices.

The most recent developments, however, are particularly important because the HDP, a neo-Kemalist project, has effectively launched an offensive against Kurdish society. In this sense, the pledge to abolish the DİB and high school religion classes represents the final stage of the PKK's original agenda. After all, hardly anyone really believes that the HDP leadership's statement will actually lead to legislative action. As such, what we witness today is a political party trying to accustom society with previously unspeakable claims. Meanwhile, they seek to send a message to certain groups within the Alevi community. There is only one way in which the HDP's latest gamble can play out. In the clash between an authentic political agenda and cheap imitations, voters will pick the former like they have in the past. After all, the imitation is yet to score a victory against the originals.
RELATED TOPICS