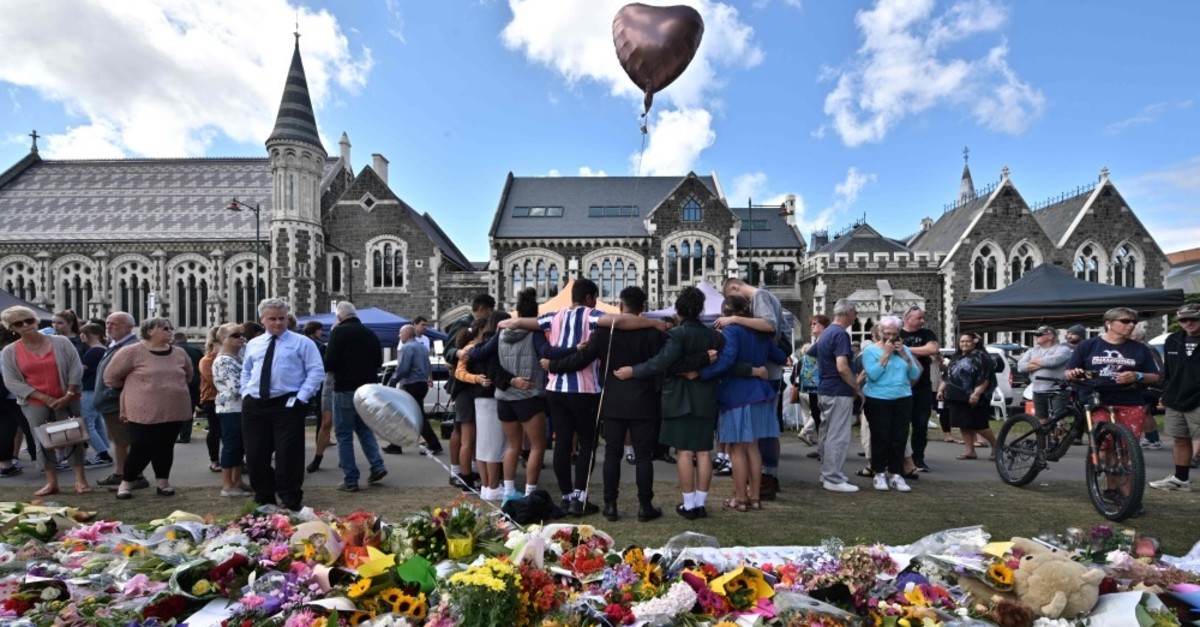 A group of students (C) sings in front of flowers left in tribute to victims at the Botanical Gardens in Christchurch on March 19, 2019, four days after a terrorist attack at two mosques that claimed the lives of 50 people.
by Talha Köse Mar 23, 2019 12:26 am

The horrific terror attack in New Zealand led to the death of 50 Muslims in two separate mosques in the city of Christchurch – the Al Noor and Linwood mosques. This shocking attack created deep sorrow and anger among Muslims all over the world. Politicians, especially New Zealand's Prime Minister Jacinda Ardern and the other communities in the country demonstrated incredible solidarity and took bold steps against the terror attack. Prime Minister Ardern announced that Friday's call to prayers for Muslims will be broadcast nationally and there will be two minutes of silence. Unfortunately, the leaders in the Western countries and more importantly some leaders of majority Muslim countries failed to even condemn the attack.

Representatives of the Organisation of Islamic Cooperation (OIC) countries will convene in Istanbul under the initiative of Turkey today to discuss the New Zealand attack at a special session. New Zealand's Deputy Prime Minister and Foreign Minister Winston Peters, along with Minister of Ethnic Communities Jenny Salesa are announced to be attending the meeting. Solidarity against extremism is crucial in the aftermath of such attacks.

The OIC meeting is an important step, but it may be more influential if the officials also join from Western countries where there is a rising threat of Islamophobia. Brenton Harrison Tarrant planned and executed the attack in a detailed way, publicized it on social media and tried to "justify" his cause with his 70-page manifesto. The white supremacist terrorist Tarrant aimed to trigger religious conflict between Islam and the West by targeting "invaders." He also associated his cause with the white supremacist and Christian fundamentalist movements in the West. The attack was a complicated and multilayered event that has many different aspects.

The attack was designed to trigger outrage among Muslim communities all over the world. Especially Muslim migrants living in the West were put on the spot. Tarrant expected to generate a retaliatory response from terrorist organizations like Daesh, al-Qaida or some other more local terror networks. That is why he tried to stimulate the nerves of Muslims by the brutal live broadcast of his massacre on social media and his messages in his 70-page manifesto. He also wanted to show that he is not alone in his "struggle."

Unfortunately, the attack demonstrates that the Islamophobic and xenophobic terrorism has reached a new stage. The extremists and the activists who support Islamophobic discourses try to turn their cause into a global movement. There are political parties, civil society organizations, formal and informal social networks that are supporting Islamophobic and xenophobic activities materially and ideologically. Those attacks and manifesto style works aim to strengthen the ties between various extremist trends.

Racist media and populist politicians are boosting the threat perception against Muslims in many Western countries. This is done systematically by the use of mainstream political institutions as well as media channels including social media. Racism and Islamophobia are becoming part of mainstream political discourse in the West, and no legal actions are being taken to prevent such a development. Even moderate politicians who are worried about the spread of discourses of hate are hesitant not to take the lead in preventing Islamophobic and xenophobic radicalism.

This hypocrisy is exploited by the extremists who spread the discourses of fear and hatred. It makes terrorists like Brenton Harrison Tarrant feel more comfortable attacking Muslims and spreading their white supremacist and Islamophobic messages. Those messages are shared and spread verbally by many politicians and activists on many occasions, but they are not restricted in any way unless they resort to direct violence.

According to Johan Galtung, who is one of the leading figures in the field of peace studies, symbols, scientific and artistic discourses, ideologies, political messages and worldviews that justify and normalize direct violence against particular individuals or groups are referred to as "cultural violence." Racism, anti-Semitism and Islamophobia are different forms of cultural violence, which may have even more dangerous consequences than direct violence.

Most mainstream politicians in the West do not want to accept the fact that people like Tarrant are not alone; there are huge organizational bodies and an Islamophobia industry behind him. That industry produces hate and mongers fear systematically and not only against Muslims but also all people with different identities. It would be naïve to think that the hate industry will just be limited to targeting Muslims. The channels that generate hate will eventually target the people who want to stay neutral against their goals.

It is crucial to demonstrate solidarity with the families of the victims and the Muslims in New Zealand in general. These attacks were not just against them; the attacks were against all Muslims and the moderate people in the West who support the idea of coexistence with differences. New Zealand, a peaceful country which has immigrants from more than 100 countries is also the victim of last Friday's terror attack.

The best way to deal with such attacks is to target fear and hate and struggle against those forces with solidarity as much as possible.

Responding to such an attack simply through public condemnation is not sufficient. More concrete action plans need to be designed and activated to address the root causes of such problems. It is now the right time to re-activate with a broader enthusiasm the projects like the "Alliance of Civilizations" (AoC). The AoC was co-initiated and launched in 2005 by Turkey's prime minister at the time, Recep Tayyip Erdoğan, and José Luis Rodríguez Zapatero, the former prime minister of Spain, to confront and overcome prejudice, misconceptions and polarization between different cultures, religions and civilizations. There is no better time to activate such joint efforts to deal with the challenge of cultural violence, which has the potential to affect all humanity.