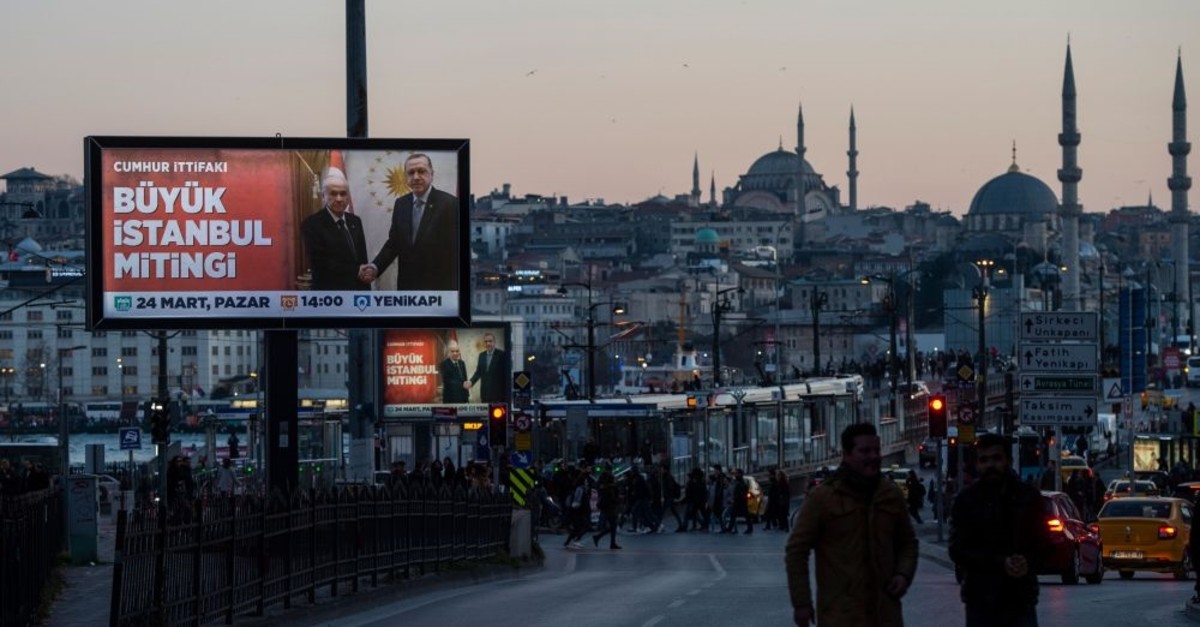 People walk in front of an election billboard depicting President Recep Tayyip Erdou011fan and the Nationalist Movement Party (MHP) leader Devlet Bahu00e7eli of the People's Alliance, ahead of the March 31 local elections, Istanbul, March 22, 2019.
by Talha Köse Mar 29, 2019 12:45 am

If the People's Alliance succeeds in the elections, the AK Party and the MHP may deepen their ties and continue to institutionalize the new political system, buoyed by this enthusiasm

Turkey is heading toward municipal elections this Sunday, March 31. Although the elections are municipal elections, the overall style and messages of the election campaigns were high profile, very similar to the presidential elections of June 24, 2018. President Recep Tayyip Erdoğan has emphasized that the elections are closely related to the survival and stability of the entire country. He consistently gave the message that a lot about the future of the country and the future of his government is at stake in the upcoming elections. His partner in the People's Alliance, Devlet Bahçeli, the chairman of the Nationalist Movement Party (MHP), also consistently gave similar messages about the significance of the elections beyond the current municipal contexts. President Erdoğan took a risk by raising the profile of the elections at a time where there are some temporary fluctuations in the economy. The opposition bloc, the Nation Alliance of the Republican People's Party (CHP) and the Good Party (İP), on the other hand, tried to keep a relatively low profile in their election campaign.

They thought that the temporary economic downturn would help reduce the popularity of the Justice and Development Party (AK Party) government.

In practice, the Nation Alliance also drew attention to the profile of their election campaign by broadening their alliance against the People's Alliance by incorporating the Peoples' Democratic Party (HDP) and the Felicity Party (SP). Those four parties do not have a lot in common other than their opposition and even hostility toward President Erdoğan and his government.

What is at stake for the electoral alliances?

The March 31 election will be important because it will be a significant test case for some political efforts that were made in the last couple of years. President Erdoğan will probably make some structural changes within the AK Party in his party after the elections. These changes may be more dramatic if his party performs below his expectations.

There will be four-and-a-half years without new elections on the horizon after the March 31 elections. This may provide an opportunity for the AK Party and the MHP leadership to reshape the nature of their alliance and reformulate their support base according to the requirements of the People's Alliance.

The success of the People's Alliance candidates, on the other hand, may further strengthen the ties between the two parties. The voter bases of the parties are very close and fluid in the central and southern parts of Turkey. A significant success story in the municipal elections may strengthen the alliance on the local level as well.

There is more at stake for the opposition bloc in the municipal elections. The CHP-HDP-İP-SP alliance will be tested at the polls. The support bases of all those parties are entirely different, but they are united in seeking to end President Erdoğan's hegemony in Turkish elections. There may be more critical voices from within the Nation Alliance if the alliance underperforms in the polls. The leadership of all the parties may be questioned if the results of the elections disappoint the members.

The most significant risk is probably for the political career of Kemal Kılıçdaroğlu, the secretary-general of the CHP. For many years Kılıçdaroğlu has struggled to ally with his party and the HDP. He made changes in the administrative posts of his party to facilitate the CHP-HDP alliance.

Although the İP seems to be the visible partner of the Nation Alliance, Kılıçdaroğlu's project focuses more on the alliance of his party with the HDP. He decided to keep a low-profile relation with the HDP, in order not to alienate the İP base.

If the HDP-CHP alliance fails in the local elections, this may be the beginning of an end for Kılıçdaroğlu. His leadership is already being questioned in his party and among the CHP supporters. Kılıçdaroğlu struggled to form this four-party alliance to save his political career, but the failure of this alliance in the municipal elections may practically be the end of his leadership of the CHP.

The outcomes of the Sunday's municipal elections will have significant consequences for the reshaping of Turkish politics. If the candidates of the opposition block succeed, there may be new political alignments as well as some possible cracks within the bloc.

The CHP will be forced to choose either to move forward with the HDP or the İP. The People's Alliance seems to offer a more predictable and stable future for Turkish politics. If the People's Alliance succeeds in the elections, the AK Party and the MHP may deepen their ties and the leaders of the two parties may continue to institutionalize the new political system, buoyed by this enthusiasm. In any case, the Turkish electorate should expect unexpected changes in Turkish politics after the elections.