Effectiveness of sanctions as a foreign policy tool for Washington 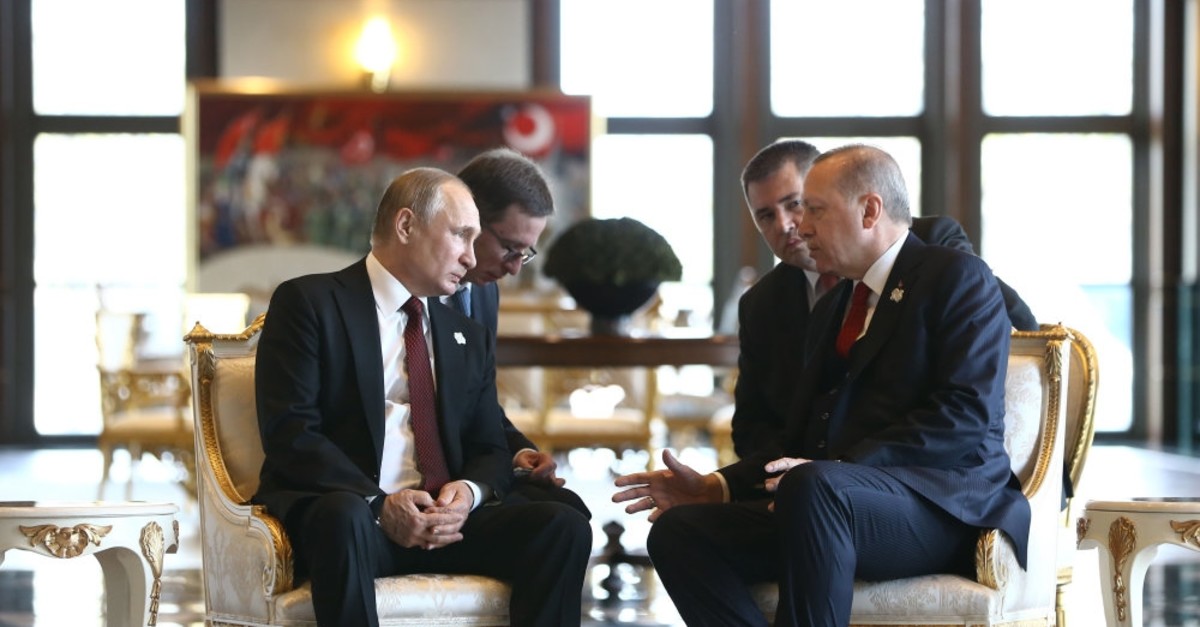 President Erdou011fan and his Russian counterpart President Putin during a one-to-one meeting at the Presidential Complex, in the capital Ankara, April 3, 2018.
by Talha Köse May 04, 2019 12:11 am

The Trump administration is using sanctions, mostly economic sanctions, more aggressively compared to earlier administrations. Last summer, Washington imposed national security sanctions on Turkish steel and aluminum due to the detention of pastor Andrew Brunson in Turkey. Washington's sanctions against Ankara were symbolically significant, jeopardizing diplomatic relations between the two NATO allies. The Trump administration's sanctions affected the Turkish economy negatively and stimulated a currency crisis, triggering a downturn in the Turkish economy. European economies were also adversely affected by economic instability last year due to their investments in Turkey.

Now, Washington is threatening Ankara again to prevent the delivery of the S-400 air defense system from Russia. Though Ankara is concerned about the potential sanctions by its essential NATO ally, Turkish officials consider the S-400 deal with Russia as a crucial element of its critical national security concerns. NATO Secretary-General Jens Stoltenberg made a midway assessment of the S-400 deal between Turkey and Russia. Overall, Turkish society and business entrepreneurs support Turkey's national security concerns, but they are also deeply concerned about the possible consequences of U.S. sanctions that may be implemented by summer 2019.

There are still questions whether economic sanctions are a useful coercive foreign policy tool. Washington imposed many severe sanctions against its opponents in the last several years. With the Countering America's Adversaries Through Sanctions Acts (CAATSA), which was enacted in August 2017, Washington increased pressure on Iran, North Korea, and Russia. The economies of Venezuela, Iran, Cuba, North Korea and Russia suffered gravely due to sanctions that were previously enacted by Washington. Washington is using sanctions as a part of its strategy to topple regimes that are hostile to the U.S. in the cases of Iran and Venezuela. Many countries and companies doing business with these countries are also indirectly affected by U.S. sanctions. They have suffered from the sanctions indirectly, and their financial transactions are scrutinized.

Sanctions in other cases are for more specific purposes, but the fear of Washington's sanctions is a matter of concern not only among Washington's close allies Saudi Arabia and the United Arab Emirates (UAE) but also for European states. In addition, thousands of names and companies have been added to the list of sanctions. There is a bipartisan consensus on most of the states, companies and names. What seems to be an effective coercive foreign policy instrument for Washington turns into a nightmare for other actors. The U.S. hegemony over the international financial system and economic and investment opportunities in the American market make economic sanctions more useful for the American side.

If Washington continues to use sanctions aggressively as a foreign policy tool, international actors may try to find alternative ways to overcome their impact. Alternatives to the U.S. controlled system of financial transactions to overcome U.S. sanctions include – using currencies other than the U.S. dollar in trade and financial transactions, increasing trade with local currencies and state protection of companies. Sanctions may also lead to the development of solidarity between particular states and between individual companies. While it is much easier to recognize the impacts of those sanctions in the short run, it is more difficult to identify the costs and possible defects of sanctions since they are more visible in the medium term. Turkey's autonomous defense technology sector was launched in the 1970s because of the U.S. arms embargo. The recent tensions between Ankara and Washington further motivated Ankara to invest in defense technologies, making Turkey one of the exporters of high-tech military equipment.

Sanctions will be less effective and less legitimate if they are imposed unilaterally, and they may deter opponents more effectively if they are agreed upon and implemented in multilateral platforms with the participation of other actors. Unilateral sanctions motivate alternative alliances and potential actors that experience similar sanctions, strengthening their ties with each other. As the number of U.S. sanctions increases and as the extent of the sanctions expands, policies related to the sanctions may become less effective.

The overall effectiveness and cost-benefit analysis of sanctions may be unrealistic, and politically sanctions can trigger new alliances and solidarities among actors suffering from sanctions. Washington's direct and indirect sanctions against Turkey and Russia brought Ankara and Moscow closer to each other. Washington should be careful to not use sanctions too frequently. If Washington's sanctions are not part of a broader vision and strategy, they may look successful in the short term, but they will fail in the medium and long term.