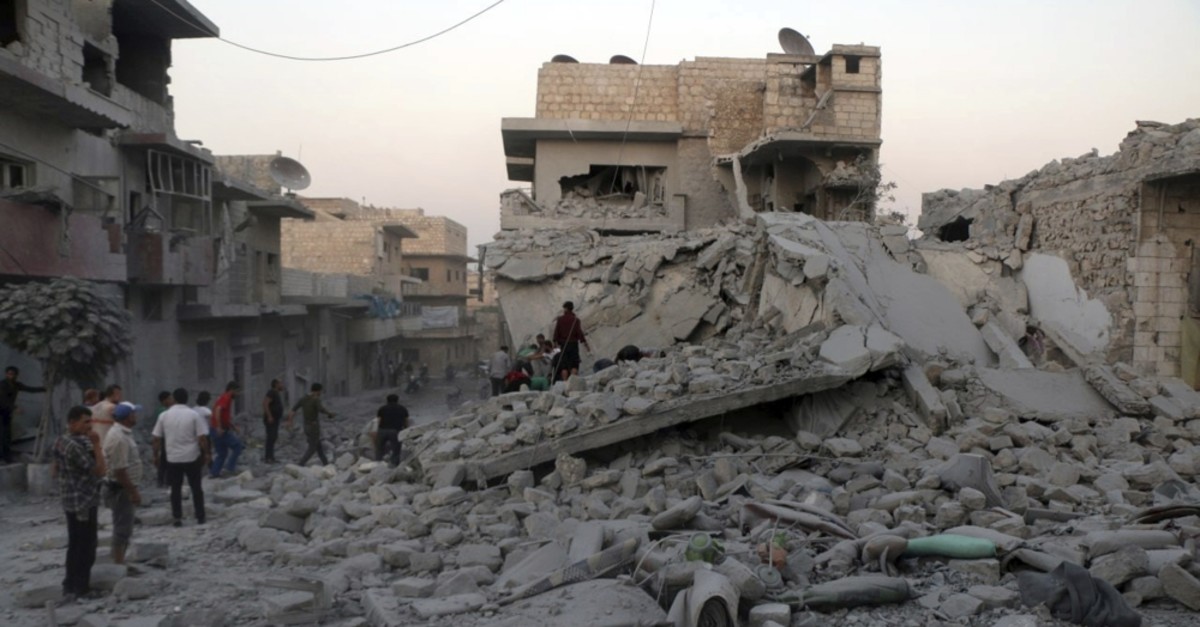 People searching for victims under the rubble of destroyed buildings that were hit by regime airstrikes in the northern town of Maaret al-Numan, Idlib, Syria Aug. 29, 2019.
by Talha Köse
Aug 31, 2019 12:25 am

The U.S. and European actors' indifference in Syria and pressure on Turkey weakens Ankara's position vis-a-vis Moscow in the political deal for Syria

The recent escalation in Idlib province has generated a new humanitarian crisis leading to the flow of hundreds of thousands of refugees to the border with Turkey. The Bashar Assad regime and Moscow have escalated the tension to push the armed opposition led by the Hayat Tahrir-al Sham (HTS) out of Idlib.

There is no exit strategy for the extremist armed opposition led by the HTS in Idlib. They are committed to continuing the armed struggle until their last bullet is fired. However, although they have easy access to light weapons, they cannot last under the regime and Russia's aerial bombardment.

With the bombardment of civilian areas, the regime is putting more pressure on the HTS and trying to cut the HTS's grassroots support. It is the civilians that suffer most from this cruel struggle, which violates all humanitarian values and conventions.

The regime continues to commit war crimes, and the international community continues to keep silent about its cruelties. The HTS do not have a plan B, and they are also resisting the idea of joining the moderate rebels, a formula that was earlier offered by Turkey.

They are bitter toward Turkey because despite the Astana process, Turkey failed to provide a protective shield to civilians in and around the Idlib area. The recent escalation of regime attacks against Idlib only strengthened the HTS's convictions against the regime and their stance against the possibility of a diplomatic solution.

It is crucial to note that the HTS-led terrorists may lose control over the territories they now control, but this may not be the definitive end to the civil war in the northwestern part of Syria.

The de-territorialized insurgency may be as destructive for the regime as the current military struggle. Such a scenario means the continuation of the armed conflict and the postponement of the political deal that would stabilize Syria. Moscow's quick-fix solution may also backfire if they do not offer an acceptable exit strategy for the opposition with a political settlement.

Moscow increases pressure on AnkaraRussia and the regime insist on complete evacuation or destruction of the HTS in Syria. They continue to increase the pressure on Turkey by surrounding military observation posts established in the Astana and Sochi talks, bombing civilian areas and creating new refugee flows and continuing to destroy the infrastructure in Idlib.

They argue that Turkey's pledge of the gradual evacuation of the extremist groups was not actualized. Ankara now faces difficulties maintaining positions in northwestern Syria because it lacks support from international actors in Syria.

Moscow expects European states to respond to the humanitarian crisis and the possibility of a new refugee flow from Idlib, but even they were surprised by the silence in Europe regarding the recent escalation.

Moscow continues to increase pressure on Ankara since they recognize that Turkey's Western allies are not in solidarity and cannot handle the humanitarian crisis in Idlib.

Moscow capitalizes on Turkey's isolation in Syria and continues to increase its pressure. Moscow's end goal in its recent surge in pressuring Turkey is to broker a deal between Ankara and the Syrian regime.

Such a deal may be a diplomatic victory for Moscow, but this may drain Turkey's credibility not only among the Syrian opposition but also among the more than 3.7 million Syrian refugees that escaped Assad's cruelty. Turkey will gain nothing from an agreement with the regime without an acceptable framework for a peace plan.

The surprise meeting between President Recep Tayyip Erdoğan and Russian President Vladimir Putin in Moscow this week aimed to prevent a possible crisis between Moscow and Ankara because of the recent escalation in Idlib.

By pressuring Turkey in Syria, Moscow gains some diplomatic leverage over Turkey. Syria, more specifically the situation in Idlib, is a useful token for Moscow to pressure Ankara.

What expands the impact of Moscow's pressure is the indifference of Turkey's NATO allies on such a complicated equation.

The Pentagon, on the other hand, continues to pressure Turkey about the S-400 missiles, F-35 planes and the People's Protection Units (YPG) issues. The Pentagon's pressure and American Congress' hostile attitude against Ankara only weakens Turkey's position in the region and pushes Turkey further towards Moscow.

Moscow is the biggest winner in Congress' and the Pentagon's dysfunctional and hostile attitude toward Erdoğan. The anti-Turkey lobby in Washington, which is sponsored by the actors from the Gulf, also implicitly serves the interests of Moscow.

It is Turkey's policy and priority to continue and expand cooperation with Russia on the issues of trade, energy and military technology based on mutual interests. Both countries benefit economically and politically from such collaboration.

There is a working trust between the leaders of both countries, but there are also continuing strategic disagreements and competition between Ankara and Moscow on several issues.

The Syria issue is a significant vulnerability for Turkey, affecting Turkey's long-term national security. The U.S. and European actors' indifference in Syria and pressure on Turkey weakens Ankara's position vis-a-vis Moscow in the political deal for Syria.

If this is their goal, they are pursuing the right strategy by leaving Ankara alone with Moscow. Actors that support increasing the diplomatic and economic pressure on Turkey should be wary of criticizing Ankara for getting closer to Moscow.