How to tackle terrorism in Turkey 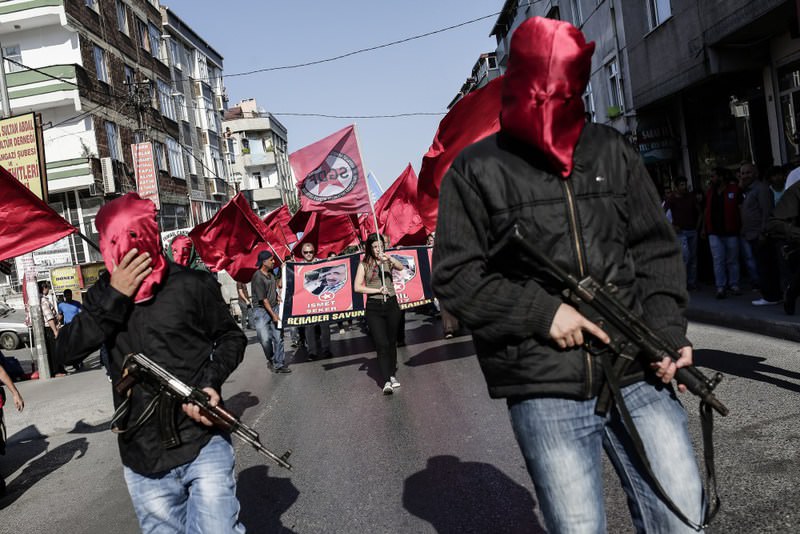 Armed left wing militans escort the coffins of victims who were killed at suicide bomb attack in Suruu00e7.
by Tulu Gümüştekin Jul 23, 2015 12:00 am

The terrible bombing in the southeastern town of Suruç killed 32 people and almost 100 others were injured, some gravely. The very same day, a Turkish Army patrol was attacked by the PKK, and for the first time in a long time, a young gendarmerie corporal lost his life.

The explosion in Suruç was extremely likely the deed of Islamic State of Iraq and al-Sham (ISIS) militants. Already, the last few weeks have seen an increased wave of arrests of suspected ISIS members or people with ties to the terrorist organization. The General Command of the Armed Forces has started to publish reports on the people trying to cross the border from Turkey to Syria who have either been arrested or repelled. In recent months, some media directly related to ISIS have been directly threatening the Turkish government and President Recep Tayyip Erdoğan, whom they qualify as a "false deity."

Turkey has not been totally immune to the wave of violence raging in Syria. In 2013, a huge bomb in Reyhanlı killed 53 people, the highest number of casualties in a bomb attack in Turkish history. It is virtually impossible to secure a land border of 900 kilometers in the absence of any valid statehood or dependable military force on the Syrian side. It could be possible to repel, loosely, every person trying to cross the border from Syria. Military measures could have been taken in order to ensure the sealing of the border. It would not render the border regions of Turkey risk-free, but it would have definitely decreased militants use of Turkish soil to wage war back in Syria. The Turkish government consistently refused to close the borders and this is how more than two million refugees could survive and salvage their dignity.

Now, especially due to the atmosphere of tense political rivalry in Turkey, an image of the Turkish government indirectly helping or passively supporting ISIS has been created, practically from scratch. The magazine "Konstantiniyye," (Constantinople) an ISIS periodical, slams Erdoğan for "wittingly or unwittingly" helping the "atheist" PKK, which denies, incidentally, that Turkey ever helped it. This is to no avail, most of the Western media and the opposition in Turkey think otherwise. So just after a terrible terrorist attack, the debate is centered on who should be politically responsible for ISIS terrorism.

It is a fact that ISIS is a terrible terror organization, and Turkey is most probably the last country to be held responsible for the emergence of such a movement. Turkey, under the Justice and Development Party (AK Party) government and its leader, Erdoğan, has been consistently against military solutions in the Middle East. Parliament even plainly rejected the possibility of a northern front against Saddam Hussein. Turkey wanted to normalize Syria and spent laudable efforts to do so at a time when Syrian President Bashar Assad was internationally ostracized. Today, when we look at the dire consequences of a military solution, it is totally irresponsible to point to Turkey and its policies for the emergence of the previously unseen violence and terror in Syria and Iraq.

There is definitely a growing need both for Turkey and democratic countries to collaborate more closely to avoid the situation spiraling further out of control in Syria and to some extent, Iraq. There is also a very urgent need in Turkey among different political parties and movements to condemn terrorism in any form and to establish a common ground to tackle the unprecedented issue of how to integrate two million Syrian refugees into Turkish society. Obviously, the war against ISIS and the moribund Assad regime will take years. A good idea would be to start a smoothly functioning cooperation system. With the U.S., there is a structured collaboration that is expanded and deepened continuously. In Turkey, the atmosphere is not that of collaboration but of conflict. We cannot afford it much longer, for the sake of the country and innocent people, the opposition should come to its senses as soon as possible and help to establish a national consensus against terror.
Last Update: Jul 23, 2015 1:25 am
RELATED TOPICS