How to deal with the war in Syria 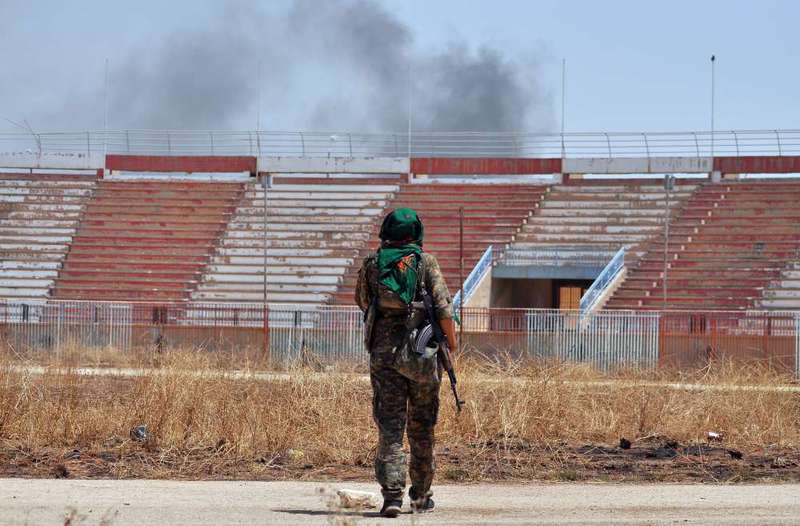 A member of the Kurdish People's Protection Units (YPG) walks in the damaged stadium in the Al-Nashwa neighborhood of the northeastern Syrian province of Hasakeh.
by Tulu Gümüştekin Aug 01, 2015 12:00 am

It is only a matter of time for the U.S. and Turkey to organize joint air raids against ISIS and help Syrians recover their territory, or at least a part of it

The government has decided to retaliate against the PKK's terror attacks. Anyone with any common sense could have imagined that the Kurdish political movement could be so blunt as to restart the armed struggle within Turkey. Everything seemed to favor the Peoples' Democratic Party (HDP), which succeeded doubling its usual election score. The fight against the Islamic State of Iraq and al-Sham (ISIS) has given the Democratic Union Party (PYD), a Syrian branch of the PKK, an unexpected reputation in the Western media and public opinion. At that juncture, only a few analysts, myself included, have declared that the PKK remains a terror organization with its own rationale, and the HDP could not distance itself from the PKK. Therefore, accepting the HDP as a conventional political party would be erroneous.

The nasty surprise came in the aftermath of the elections. Arguing that the government was building dams, roads and military posts in southeastern Turkey, the PKK, through its urban organization KCK, declared that the non-violent period was over. The HDP did not ask why such a criminal decision was made, as they repeatedly professed a peaceful solution in Turkey in their election campaign. But what is done is done, and more than 14 people have been killed in attacks, bombings and conflicts at the hands of the PKK since the cease-fire ended.At least 32 people were killed and a hundred injured in the sucide bombing in Suruç, which has changed the Turkish attitude vis-a-vis the war in Syria. Up until Suruç and the direct attack on a Turkish outpost by ISIS the day after, the Turkish Armed Forces were on high alert within their borders without interfering militarily in Syria. Obviously, Turkey supported the coalition against Syrian President Bashar Assad, even more obviously, Turkey accepted, as a humanitarian gesture, people fleeing the war in Syria. But except some light armaments sent to the Turkmen brigade, which has been heralded as a dispatch to ISIS by the anti-government media, without any tangible proof, Turkey did not play any military role in Syria. The PYD's People's Protection Units (YPG) have been fighting against ISIS and the main conflict has taken place between the regime forces on one hand and the Free Syrian Army on the other. The YPG and other Kurdish forces carefully avoided any clash with forces loyal to the regime. They also live together in Rojova in the presence of about 20,000 soldiers of the Syrian army loyal to the regime, which clearly shows the division of the forces and the state of the alliances in Syria.

The Turkish Air Force has bombed ISIS positions in northern Syria but the aircraft did not enter Syrian airspace. On the other hand, the PKK headquarters in northern Iraq, where they have stayed totally unmolested for decades, have been heavily attacked by the air force. This assymmetry in Turkish military operations has only one reason, the U.S. is in charge of the Syrian operations, where they have dependable information and the means to overcome the air defense system established at the time of the alliance between the defunct Soviet Union and former Syrian President Hafez Assad. The transportation of airplanes and ground troops to İncirlik Air Base in Turkey is being carried out swiftly by U.S. forces. It is only a matter of time for the U.S. and Turkey to organize joint air raids against ISIS and help Syrians recover their territory, or at least a part of it. In the coming days and weeks, we will see the first results of the Turkey-U.S. joint plans.
Last Update: Aug 02, 2015 10:05 am
RELATED TOPICS