The reality of terror that US and Iran should remember 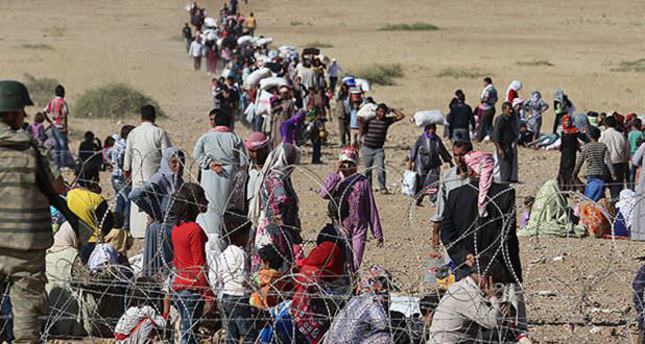 by Yahya Bostan Oct 16, 2014 12:00 am
Kobani is one of the three Kurdish cantons that have been formed in northern Syria with the aim of independence by the Democratic Union Party (PYD), the Syrian branch of the PKK. The Islamic State of Iraq and al-Sham's (ISIS) invasion of Kobani means that the plans of the PKK and the PYD might come to naught.. However, the fight against ISIS also gives an opportunity to the PKK. The PKK is trying to create ground for legitimacy for itself by fighting against ISIS. In this regard, PYD President Salih Muslim's recent visit to the U.S. and the topics that were on the agenda during the visit should be considered. There are no details about it in open sources but Ankara senses negativities from this meeting. It has been pointed out that the PKK had three demands in order to fight against ISIS both inside and outside of Kobani to become the land force of the U.S.-led coalition to fight ISIS: be removed from the list of terrorist organizations, arms shipments and monetary aid. The PKK and the PYD's removal from the list of terrorists groups would doubtlessly worry Ankara and it is evident that direct weapons and monetary aid to the organization would threaten Ankara's interests in the long run. Ankara is watchfully following the arms and monetary aid Iran provided to the organization and is also closely looking at the steps the U.S. will take on that matter because the PKK and the PYD have not abandoned terrorist methods yet even though they are fighting against ISIS. A clear example of this was seen in Turkey regarding the crisis in Kobani. The Peoples' Democratic Party (HDP) demanded Ankara send weapons and monetary aid to PKK and PYD members fighting in Kobani.

Ankara, on the other hand, determined that it would not be right to send weapons to the PKK, which is officially recognized as a terrorist organization and with which negotiations to lay down arms are ongoing, but decided to continue providing humanitarian aid to the 180,000 refugees from Kobani in Turkey and those fighting in Kobani. Also note that PKK members injured in battles with ISIS are being treated in Turkey. The HDP made a call for protests in Turkey upon the wish of the PKK headquarters. The call for protests had two aims. The first was to tell Turkey that it must provide the PKK fighting in Kobani with weapons since if they were left alone, the conflicts in Kobani would spread to Turkey. The second was to give a message that says "do not intervene in Syria without our wish or we will create unrest on Turkey's streets." It is also noteworthy that the messages from the PKK completely coincide with the expectations of Iran and the regime of Bashar Assad.

Upon that call, HDP supporters started demonstrations on streets in 35 provinces and for about three days vandalism prevailed in the streets. With the HDP's call again, those demonstrating on the streets clashed with police. Public buildings, offices of political parties, hospitals, schools and workplaces were damaged. The number of damaged buildings reached 1,113 and 1,177 vehicles were destroyed or damaged. A total of 351 people were injured in the violent protests and most importantly, 40 people lost their lives. Two police officers were shot by PKK members and died. Civilians who did not have any relation with the incidents were violently attacked or thrown from high-rise buildings by PKK supporters just because they had beards. In other words, the PKK implemented the methods of ISIS in Kobani in Turkey. The violence of PKK supporters also put the reconciliation process at risk. Eventually, Abdullah Öcalan, the imprisoned leader of the PKK, intervened since he wants legitimacy for the PKK by laying down arms. He asked the HDP to end the provocative demonstrations, which the HDP did. Now, the streets are calm in Turkey. However, the incidents reminded everyone of the fact that the PKK, which was about to lay down its arms through the ongoing reconciliation process and negotiations, is actually a terrorist organization that does not hesitate killing innocent people. The incidents also showed that not only ISIS, but also the PKK, poses a major threat to stability and safety in the region. All the countries, but especially the U.S. and Iran, should take note.