What does Öcalan want? 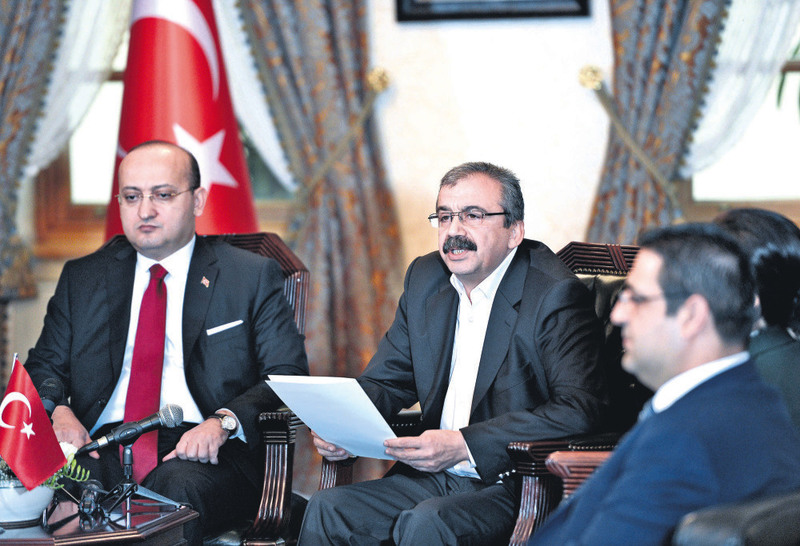 by Yahya Bostan Mar 12, 2015 12:00 am
Let's continue to analyze the call for disarmament that was made to the PKK's imprisoned leader, Abdullah Öcalan. To review the latest developments, Deputy Prime Minister Yalçın Akdoğan and some government members met with Peoples' Democratic Party (HDP) deputies at Istanbul's Dolmabahçe Palace on Feb. 28. During the meeting, HDP Deputy Sırrı Süreyya Önder read Öcalan's call for disarmament. It was a historic turning point since the reconciliation process has approached close to its goal for the first time.

After this call, different comments were made and different stances were adopted. The process finally got back on the rails after a stagnation following the Oct. 6-7 Kobani demonstrations, and at least the psychological atmosphere changed in favor of the process again. The government is pleased with that. However, since the PKK did not keep its previous promise, the government is currently acting more cautiously. Both President Recep Tayyip Erdoğan and the government favor the call, but also expect to see practical implementations.

The opposition approaches the call for disarmament with a mutual policy adorned with different remarks. The harshest stance has come from the Nationalist Movement Party (MHP), which is trying to appeal to nationalists for the upcoming general elections on June 7. According to the MHP, the government accepted the PKK's suggestion to separate the country with this call. So, the PKK's disarmament call is not acceptable and cannot be defended, as the MHP argues.

Main opposition Republican People's Party (CHP) Chairman Kemal Kılıçdaroğlu responded to the first question addressed to him regarding the disarmament call positively, saying that he supports the call. However, he changed his mind after a while, maybe after negotiating with his advisors. His latest statement on the subject is: "I don't believe that peace can be introduced with this mentality."

Things are a bit more complicated within the HDP, the most important actor in the reconciliation process after the ruling party. Öcalan's call unraveled two main inclinations in the HDP that date back to the party's history. One of these inclinations represents the influence from Iraq's Qandil Mountains, the PKK's headquarters. It is known that the PKK leadership there, or a clique among them, have resisted Öcalan's announcement for a long time. Actually, the announcement was delayed by about 20 days due to resistance from them. In the meantime, the HDP delegations headed to both the Qandil Mountains and İmralı Island, where Öcalan is imprisoned, to convince the PKK leadership, which has more than one reason to resist: The authority gap in Syria, the PKK's European wing's influence on the leadership and the pressure imposed on the PKK to leave the table by some regional and European countries. All these can be counted among the leading reasons.

This attitude of the PKK leadership is also reflected to statements. HDP Co-Chair Selahattin Demirtaş is the political spokesperson of this branch. After the disarmament call, Demirtaş said the disarmament congress could not be gathered without reaching an agreement on the 10 articles Öcalan proposed, which was reviewed as a counter-move. Demirtaş also elicited reactions due to his call for young people to demonstrate on the streets during the Oct. 6-7 Kobani incidents in which 52 citizens were killed.

The second main branch of the HDP favors Öcalan. Öcalan's latest call makes his will for the PKK's disarmament indisputable. So why does Öcalan want the accomplishment of the reconciliation process? In return of what does he demand the disarmament of the PKK? Does he wish the enlargement of the room where he is imprisoned? Does he want to move to the shore of İmralı Island? Does he aim at being transferred to another prison located off of the island? Or does he wish to be put under house arrest?

Two days ago, I asked those questions to an authority that has a comprehensible knowledge of the process. His answer was: "Öcalan did not bring any of these demands onto the agenda during the negotiations. It seems that he believes in the permanent peace of Turks and Kurds. He has two options. If the reconciliation process fails, he will be remembered as the murderer of 30,000 people. If it succeeds, he will be remembered with the contributions he made to this great peace. That is to say, Öcalan wants to be recorded in history as a figure having contributed to peace rather than an armed terrorist." This is for the interest of those wondering what was given in return for the disarmament call.
Last Update: Mar 12, 2015 1:12 am
RELATED TOPICS