Will the HDP be able to pass the election threshold? 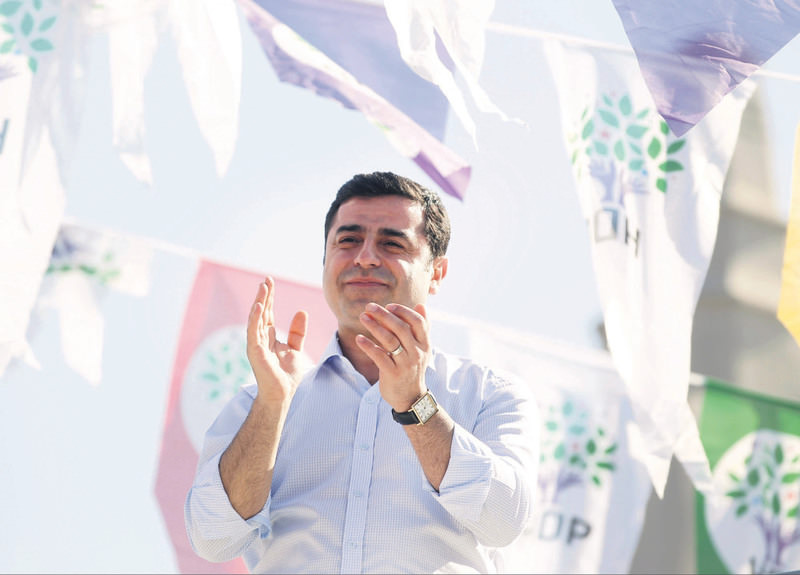 Selahattin Demirtas, co-chairman of the Peoples' Democracy Party (HDP), greets his supporters during an election rally for June 7 parliamentary elections in Istanbul.
by Yahya Bostan May 21, 2015 12:00 am

Having received 3.9 million votes before the Kobani incidents in which 52 citizens lost their lives, can Demirtaş's party receive 4.8 million votes now when the positive atmosphere of the reconciliation process has been poisoned?

There are only 16 days left until the elections. There has been no such ambiguity regarding how the parliamentary arithmetic would be shaped in any previous election. It is more or less evident that the Justice and Development Party (AK Party) will preserve its power without the need of forming a coalition following the June 7 general elections. How many seats the ruling party obtains in Parliament is a significant question though. After the elections, we might encounter the most powerful ruling party in its history. The ballots might also lead to a weak ruling power. The Peoples' Democratic Party's (HDP) passing the 10 percent election threshold will determine this. If the HDP exceeds the threshold, the number of seats the AK Party will have might decrease to 280. Otherwise, the number of seats might increase up to 345. So, will the HDP be able to pass the threshold? Surveys do not show a clear picture. Polling companies are also confused. Some estimations regarding the vote rate for the HDP are around 9 percent while others show that its vote rate will be above 10 percent. Let's put aside what surveys suggest and resort to figures to have an idea of the HDP's election threshold challenge. We have already mentioned that the parliamentary arithmetic will be shaped according to the HDP's vote rate on June 7. And the result the HDP will obtain is to be determined by the participation rate of citizens in the elections. So, it is required to calculate the participation rate first.

There is other data suggesting that the votes the HDP will receive might be more than that. The presidential election held on August 10, 2014 in which the HDP presidential candidate and the party's current co-chair, Selahattin Demirtaş, received 3.9 million votes. This is critical data. But it must be analyzed by evaluating the current conditions. Demirtaş received this rate amid the positive atmosphere of the reconciliation process. The reconciliation process and period without conflict prepared suitable ground for the HDP to become a "Turkey party." The HDP used this and took the right steps to increase its supporters. Demirtaş appealed to anti-AK Party voters and gave mild and positive messages both to both western and eastern Turkey. And after the Nationalist Movement Party (MHP) and Republican People's Party (CHP) nominated the low-profile candidate, Ekmeleddin İhsanoğlu, for the presidential election, no barriers remained for Demirtaş to come to the forefront. The increasing votes Demirtaş enjoyed in the presidential election might be the result of the votes he received from the CHP's base. He probably did not appeal to the MHP's base. İhsanoğlu, the joint presidential candidate of the CHP and MHP, received 15.5 million votes while the total number of votes the CHP and MHP got in the 2011 general elections was 16.7 million. It is not certain if the 1.2 million missing votes belong to voters who did not cast ballots or those tending toward Demirtaş. Due to this ambiguity it is impossible to accurately determine the number of votes the HDP will get. But there is a bare truth independent from all these questions. Demirtaş received 3.9 million votes on August 10. Another truth is that if the expected participation rate is realized, the HDP will need 4.8 million votes. In other words, the HDP must receive at least 900,000 extra votes apart from its own base to exceed the 10 percent threshold, which is the best scenario. If Demirtaş really appealed to some of the CHP's base in the presidential election, he has to win again. This means that the extra votes the HDP will need might exceed 1 million. Having received 3.9 million votes before the Kobani incidents in which 52 citizens lost their lives, can Demirtaş's party receive 4.8 million votes now when the positive atmosphere of the reconciliation process has been poisoned? We will see it on the evening of June 7.
RELATED TOPICS