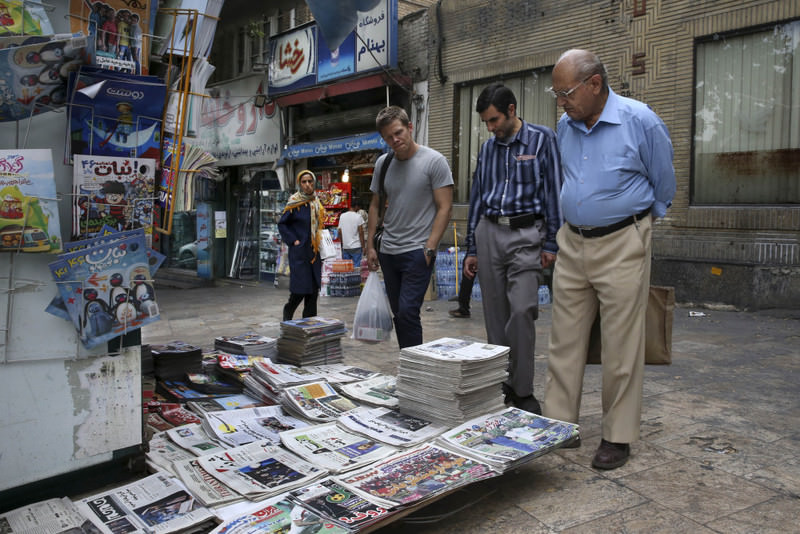 People read front pages of Iranian newspapers at a news stand in the Tajrish Sq. northern Tehran, Iran.
by Yahya Bostan Aug 06, 2015 12:00 am

To strengthen its presence in the region, Iran plans to support the PKK and PYD despite their terrorism just because of their common needs

In recent years Iran threw its entire weight behind Syrian President Bashar Assad's regime in order to prevent change in Syria. The country, furthermore, enlisted the services of Shiite militants and Hezbollah in the battle over Damascus. While both the regime and Shiite militants continue to exert pressure on the Syrian opposition, the rebels have had the upper hand in recent months. Nowadays, the goal is to gain control of Aleppo and Latakia to change the course of the civil war.

Whenever the moderate rebels gained some success in the past, another source, the Islamic State of Iraq and al-Sham (ISIS), has joined the fight against them. Iran might be fundamentally opposed to ISIS, but it benefits from the terrorist organization's strategy, which strengthens the Damascus-Tehran axis. Most recently, the United States and Turkey agreed to create an ISIS-free safe-zone and Ankara launched airstrikes against ISIS, which perpetrated a deadly suicide attack in Suruç and killed a Turkish soldier at the border. Keeping the current situation in mind, there is no future for ISIS in northern Syria, which means that the Assad regime will have to deal with new challenges. Iran, in turn, desperately needs to field a new force to balance the scales.This new force is none other than the PKK and Democratic Union Party (PYD), whose effort to carve out a piece of northern Syria for their own was spoiled by the Turkish-American deal. With the moderate opposition forces growing stronger, the PYD and its People's Protection Units' achievements are now under threat. The fact that Ankara reached an agreement with Washington further complicates the picture. At the same time, Ankara responded quite heavily to the PKK's decision to unilaterally end the two-year cease-fire on July 11 and launched a series of terrorist attacks across the country. In light of the most recent developments, the PKK and PYD are looking for a new sponsor in the Middle East. Enter Iran.

Iran and the PKK and PYD have a lot of overlapping interests. It is no secret that the PKK and PYD effectively hate the Barzani family in northern Iraq's Kurdistan Regional Government (KRG), who enjoy close ties with Turkey. At this time, the movement, like Iran, works hard to remove KRG President Masoud Barzani from power. In response, Barzani has objected to the PKK's terrorist agenda and Tehran's expansionist foreign policy.

Meanwhile, Iran and the PKK and PYD see eye-to-eye with regard to the Kurdish reconciliation process in Turkey. On July 11, the PKK made its position clear by unilaterally ending the cease-fire. It is no secret that Tehran is staunchly opposed to the reconciliation process, since a peaceful resolution to decades of bloodshed will inevitably make Turkey, a historic rival, stronger. According to Turkish officials, the country has repeatedly called on the PKK leadership to refrain from disarmament.

The most recent developments in the Middle East suggest that the above assessment is indeed correct. On July 26, Iranian President Hassan Rouhani visited Rojhilat, a predominantly Kurdish part of his country, to announce that his government cared about Irbil's security. "Long live Kurdistan," Rouhani passionately added, a thinly veiled message to the PKK, currently looking for a sponsor, and a cold shoulder to Barzani. Thus Iran and the PKK got much closer than before. The following day, PYD Co-Chair Saleh Muslim spoke to Al-Hayat, a London-based Arabic newspaper, to suggest that his party's armed wing, the YPG, might join the Syrian army under the right circumstances, thus hinting that he was prepared to work with Iran and Damascus. Three days later, Iran's chief military commander, Hassan Firuzabadi, criticized Turkey's airstrikes on PKK positions in northern Iraq, saying that the country was making "a grave mistake by targeting Kurdish groups fighting ISIS." Finally, on Aug. 4, Al-Arabiya claimed that Hasan Nasrallah had remarked that "the road to the liberation of Jerusalem goes through Rojava" followed by another claim that Hezbollah militants had crossed to Syria's predominantly Kurdish parts.

It would appear that Iran has decided to further existing tensions in the northern parts of Syria and Iraq. Once again the country attempts to design the Middle East through the proxy of terrorist organizations. Having reached a nuclear deal with the international community, one would expect Tehran to distance itself from terrorism. Instead, the agreement clearly encouraged Iran to form closer ties with mercenaries and terrorist organizations.
RELATED TOPICS