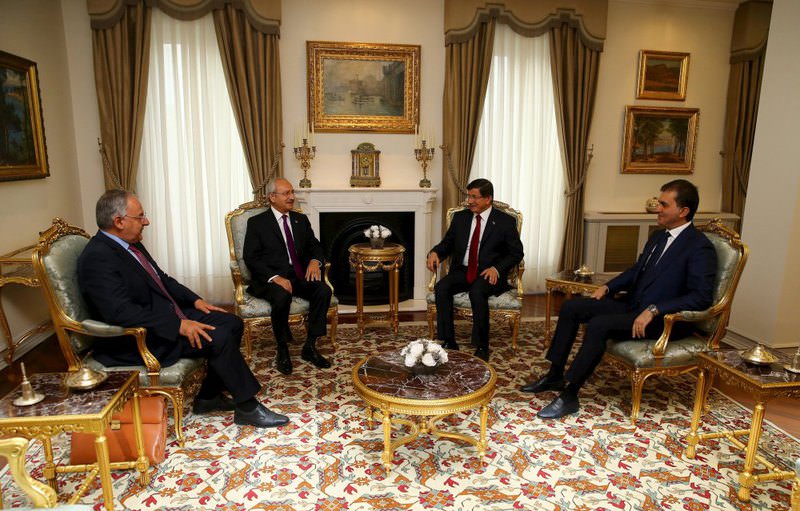 The rumor mill in Ankara suggests an AK Party-CHP coalition is on the way. The two parties have to set aside their ideological differences and focus on reforming the election system, lowering the threshold and amending the Constitution

As of this morning, Prime Minister Ahmet Davutoğlu has exactly 10 days to form the next government. If the ongoing negotiations with the Republican People's Party (CHP) fall through, Davutoğlu will have to inform President Recep Tayyip Erdoğan that he has been unable to strike a deal, which means that the president will ask CHP Chairman Kemal Kılıçdaroğlu to take a crack at it. Provided that the CHP has no serious chance of forming a government, however, Erdoğan could just call for early elections to avoid wasting the nation's time.

Earlier this week, the word in the Turkish capital's back rooms was that early elections, as opposed to a coalition government, were around the corner. As such, most observers expected the prime minister to announce that the talks had been unsuccessful after meeting with Kılıçdaroğlu on Monday. Apparently, things changed. Ahead of the meeting, he called for a Cabinet meeting to discuss whether or not the party should push for a coalition with the CHP. According to sources close to the Justice and Development Party (AK Party) leadership, the majority supported the plan while a small minority left the meeting unhappy and confused, which many people saw as a sign of things to come.

Following the Cabinet meeting, the prime minister sat down with Kılıçdaroğlu for four-and-a-half hours to conclude, according to insiders, that they should give the coalition government a shot. There are, however, differences of opinion over timing with sources claiming that the AK Party would like to put a clock on the coalition government in advance, since the supporters of both parties really do not want a long-term partnership with the other side. A one-year agreement appears to be the incumbents' top choice. Furthermore, the AK Party leadership would like the two parties to leave their ideological differences aside and implement a reform agenda whose contents, such as election reform, lowering the 10 percent national election threshold and amending the Constitution, will be determined in advance. When time is up, according to the proposal, the two parties will call for early elections.

At this point, it would be perfectly reasonable to ask why the AK Party wants to put a clock on a coalition government. There are several reasons, the first being that the party leadership has not made up its mind about early elections. Even if Turkey holds new elections in the autumn of 2015, there is a good chance that the distribution of parliamentary seats will remain largely the same, which makes the idea of forming a coalition government more acceptable. Meanwhile, the AK Party base supports a partnership with the Nationalist Movement Party (MHP), which remains cold to the idea. At this time, partnering with the CHP appears to be the AK Party's only choice short of early elections, but this is an option that approximately 85 percent of the party's supporters oppose. Believing that the base is not crazy about a four-year plan, the AK Party leadership thinks that they can sell a more modest commitment. Another reason behind the AK Party's hesitation is the fundamental belief that a coalition government is doomed to fail as the two parties have serious differences of opinion over education, foreign policy and the economy. The CHP would like a smaller number of religious schools, the abolishment of mandatory religion courses, reverse the constitutional amendment to introduce direct presidential elections and reset Turkey's foreign policy.Where the CHP leadership stands on a potential partnership with the AK Party, meanwhile, did not become clear until the Executive Board meeting the following day. The party leadership has reportedly authorized Kılıçdaroğlu to make a four-year deal with an emphasis on the economy, a new constitution, education and social peace. In other words, the CHP would not like a short-term partnership, which they believe gives more time to the AK Party to prepare for early elections. The parties, as such, seem to have reached an impasse regarding the coalition's lifespan. This afternoon, the prime minister will meet Kılıçdaroğlu in the hope of ironing out the glitches.

Last week the power brokers in Ankara started to believe that an AK Party-CHP coalition government is on the way. One must note, however, that the winds of optimism could change in an instant. For the time being, there are strong signs that we will be talking about early elections quite soon.
RELATED TOPICS