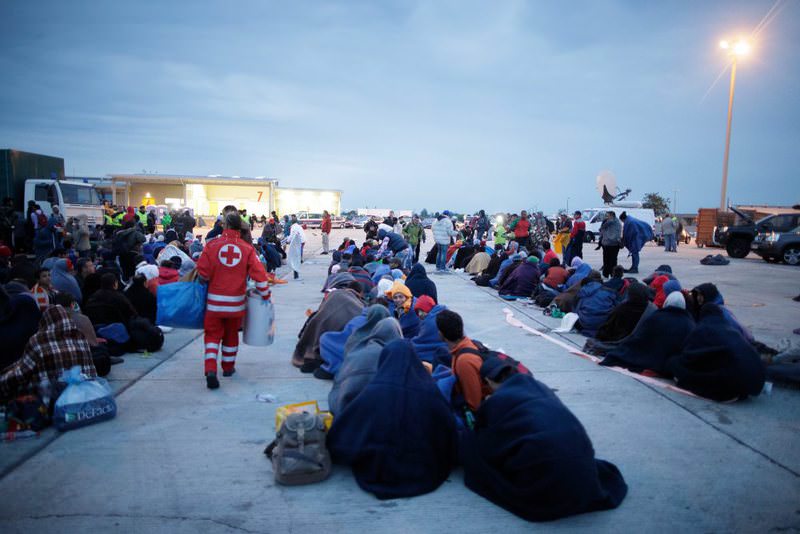 Thousands of Syrian refugees, who are presumed to be immediately continuing their journey on to Germany, reached Austria after the Austrian government agreed to receive them.
by Yahya Bostan Sep 07, 2015 12:00 am

There are four lines of thinking about the Syrian civil war.

First, there are several countries that deeply care about the humanitarian crisis and the future of the Syrian people. Turkey, which spent more than $6 billion for 1.8 million refugees, falls within this category. Within the first weeks of the conflict, the Turkish government called for the removal of Syrian dictator Bashar Assad and, moving forward, pushed for a new government. Jordan, home to approximately 600,000 Syrians, adopted a similar approach.The second group features Saudi Arabia, Kuwait, Qatar and the United Arab Emirates - countries asking for Assad's removal but turning a blind eye to the humanitarian crisis. Although they have offered plenty of assistance to the Syrian dictator's opponents, these governments are unwilling to accept refugees.

Others, including the United States and the European Union, are willing to let the fire burn as long as the smoke stays away from their eyes. President Barack Obama, for instance, clearly thinks that his successor should deal with the situation in Syria. Counting down to retirement, Mr. Obama has no intention to disturb the delicate (and bloody) balance of power in the war-torn country. Focusing exclusively on the Islamic State of Iraq and al-Sham (ISIS), the Obama administration remains unwilling to address the root cause of the problem, namely the Assad regime's survival. At this point, Washington's half-hearted support for the moderate rebels and reluctance to push for a safe zone in northern Syria positions the U.S. as one of the main reasons Assad remains in power. The human cost, meanwhile, continues to grow.

The EU, perhaps to the contrary of individual EU citizens' demands, refuse to create a road map for Syria's future. Nor do they have any interest in the humanitarian crisis. Looking for any excuse to avoid responsibilities, they refer to displaced Syrians as "migrants" rather than refugees or asylum seekers. Last week, Hungarian president Viktor Orb

án took Europe's indifference to the next level by openly saying that "we don't want a large number of Muslims in our country." The Slovakian government followed suit to announce that it was only willing to accept Christian asylum seekers. Meanwhile, Germany's Interior Minister Thomas de Maiziere came up with a selfish and pragmatic solution: "Let us build a camp in İzmir, Turkey to determine which refugees really need Europe's assistance."

Finally, the fourth category includes Russia and Iran, the masterminds behind the bloody mess in Syria. At this point, neither Moscow nor Tehran have any interest in the challenges that the Syrian people face. Their main concern is to continue supporting the Assad regime in order to pour fuel on the fire.

The dead body of 3-year old Aylan Kurdi, which washed up on Turkey's Aegean shore last week, sent shockwaves across the world. Having opted to ignore more than a quarter million deaths caused by barrel bombs, chemical weapons and terror attacks, the international community started to look for ways to provide relief only after they found dead bodies at their doorstep. French President François Hollande's call on world leaders to take action reflects a slight change in Europe's attitude. Meanwhile, Italian Prime Minister Matteo Renzi said Thursday that the world needed to develop a global strategy in order to tackle the issue.

In the tragedy's wake, European nations pledged to accept more asylum seekers. While the French government called for the introduction of mandatory refugee quotas across the EU, Germany has pledged to take in 800,000 refugees by the end of 2015. It would appear that the EU will stop turning a blind eye to the situation in the Middle East by welcoming more Syrians. The decision, however, offers but temporary relief: There can be no permanent solution until a representative government replaces Assad's regime to promote democracy in Syria. Certain countries, which yearn for a "sterile" world with no refugees, would do the Syrian people and themselves a huge favor if they start working toward their goal.
Last Update: Sep 07, 2015 2:01 am
RELATED TOPICS