No solution without confrontation 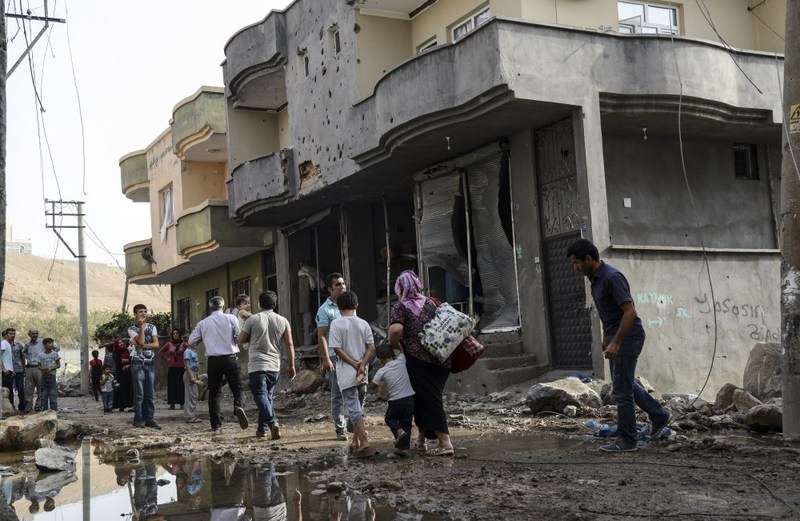 Citizens in the predominantly Kurdish towns in southeastern Turkey live in fear due to the PKK's latest terrorist attacks targeting civilians.
by Yahya Bostan Sep 14, 2015 12:00 am

While aware that military responses hamper the reconciliation process, Ankara also knows that no government can turn a blind eye to a terrorist organization that poses a threat to its citizens

More than 30,000 people lost their lives in the clashes between Turkish security forces and PKK militants since the mid-1980s, yet the organization remains fully operational. At this point there is no question that security measures alone cannot neutralize the terrorist threat. Most people came to understand that terrorism was fueled by a complex set of sociological, psychological, historical and financial factors, which is why the Kurdish reconciliation process has been one of the Justice and Development Party's (AK Party) most popular initiatives.

The reconciliation process aimed to facilitate the PKK's disarmament and the armed militants' re-integration into social and political life through dialogue. In order to encourage the organization to follow through with the plan, the government introduced new rules of military engagement, which meant that provincial governors would have to authorize military operations. Unfortunately, the disarmament talks came to an abrupt end when the PKK unilaterally ended the two-year ceasefire on July 11and proceeded to target security forces. The organization's decision, according to a written statement, was the construction of roads, dams and police stations in southeastern Turkey. Some people believe that the PKK leadership saw the Peoples' Democratic Party's (HDP) strong performance in the June 7 parliamentary elections as a sign of the people's support for armed struggle.

Over the past two months, PKK militants have killed more than 100 Turkish citizens, including soldiers, police officers and civilians. The most recent attacks led to the deaths of 16 soldiers in Dağlıca in Hakkari and 13 police officers in Iğdır. On Friday, the PKK fired at three police officers dining at a restaurant in Diyarbakır and killed a 22-year-old waiter. Several days earlier, they shot dead a doctor who turned his car around to avoid going through a PKK checkpoint. In response, Ankara launched airstrikes on PKK positions in northern Iraq and has killed nearly 200 militants. The police, meanwhile, raided PKK safe houses in certain towns, killing 32 terrorists and seizing 800 kilograms of explosives. According to security sources, the PKK had relocated experienced militants fighting in the Democratic Union Party's (PYD) People's Protection Units (YPG) ranks in Syria to Cizre, where several civilians were killed in clashes.

In the end it became clear that the PKK leadership had used the reconciliation process as a pretext to recruit new members, stockpile weapons and prepare for the next wave of terrorist attacks. According to intelligence sources, the organization stored at least 80,000 assault rifles in certain residential areas and used official vehicles to plant bombs alongside major roads. In order to conceal the explosives, Democratic Regions Party- (DBP) controlled municipalities paved the roads while the authorities and PKK leadership were negotiating terms. The security forces, to be clear, have no idea how many roadside bombs and improvised explosive devices (IEDs) the militants have buried in eastern and southeastern provinces. At the same time, the organization deployed a large number of militants to Syria in order to set up cantons and protect PYD-controlled territories.

It goes without saying that no government could tolerate such a national security threat. There is no country on the planet that would turn a blind eye to systematic violations of public order and threats to its citizens. Over the past three decades, Turkey has discovered that military operations are not the answer. The reconciliation process, in contrast, proved that there can be no solution without confrontation. Moving forward, Ankara will adopt a mix of security measures and dialogue in order to push the PKK leadership to reinstate the cease-fire.
Last Update: Sep 14, 2015 2:15 am
RELATED TOPICS