PKK, ISIS and the United States 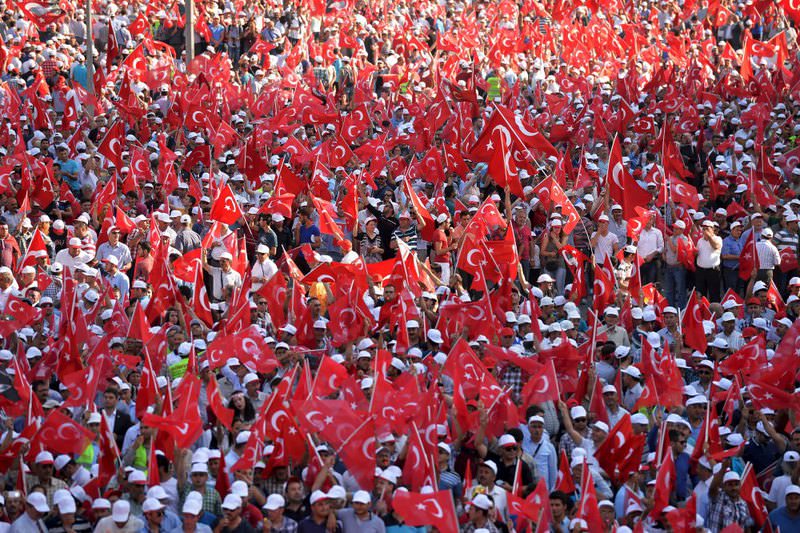 Thousands of demonstrators carry Turkey's national flag during a march against the PKK's continuing terrorist attacks on Turkish security forces and the civilians.
by Yahya Bostan Sep 21, 2015 12:00 am

The similarity between weapons, explosive devices and remote-controlled bombs and the attack tactics used by the PKK and ISIS in the region brings to mind a possible connection between the two terrorist organizations

On July 11, the PKK issued a statement to unilaterally end a two-year cease-fire and proceeded to perpetrate terrorist attacks against civilians and the security forces. In recent weeks, it has become clear that the group has revised their tactics: Turkey fights a terrorist organization which is undergoing a serious transformation.

There are at least two changes in the PKK's strategy: (1) The organization no longer uses large groups of militants to target military outposts and teams head on. Instead, PKK militants incorporated remote-control bombs and improvised explosive devices (IEDs) into their tactics. Suicide bombers, which the Islamic State of Iraq and al-Sham (ISIS) employs in Syria and Iraq, are a recent addition to the options available to the PKK leadership.

A recent assault against the Dağlıca military outpost reflected the PKK's changing tactics: On Sept. 7, the organization used roadside bombs to kill 16 Turkish soldiers. A subsequent investigation revealed that multiple IEDs had been buried on the road and the PKK, with the help of the Peoples' Democratic Party (HDP)-controlled local government, had concealed the explosives. Security sources believe that the explosives originated in Syria. The next day, a similar attack took place in Iğdır, where PKK militants used close to 1,000 kilograms of explosives to kill 14 police officers in a bus. The local police discovered that they had loaded a stolen car with explosives, which was left on the police officers' route and detonated by remote control. Another suicide attack by the PKK took place in Doğubayazıt, Ağrı on Aug. 3, when a tractor loaded with 2 tons of explosives was detonated near the Karabulak gendarmerie station. While the tractor was slowly approaching the target, a large group of armed PKK militants fired at the station. All three attacks looked like masterpieces from the ISIS playbook.

The organization's tactics also changed in the sense that the attacks moved from the countryside to residential areas. According to security experts, the PKK leadership calls their new tactic "rural-based urban warfare." In recent years, the PKK exploited the Kurdish reconciliation process to stockpile more than 80,000 armed weapons in town centers. Another important step was the establishment of the Patriotic Revolutionary Youth Movement (YDG-H), the organization's youth wing, during the early days of the disarmament talks. The PKK, which has a fighting force of 5,000 in the mountains, is claimed to have enlisted the services of 20,000 militants, including children, in town centers.

Upon ending the cease-fire, the PKK proceeded to rise up against Ankara in Cizre, Şırnak, where the HDP-controlled municipality declared self-rule. On Sept. 4, the governor of Şırnak introduced a week-long curfew in the town center as the security forces killed at least 42 terrorists. Intelligence reports suggest that approximately 30 PKK militants oversaw the urban campaign in Cizre, where they commanded 200 YDG-H militants. To prevent the security forces from advancing, they planted explosives on streets and dug holes between 150 residential buildings, which were used as weapons arsenals and safe houses. Officials believe that the PKK leadership deployed experienced fighters, including sharpshooters, from Syria to Cizre.

The conclusion that the PKK was adopting ISIS's tactics was reached at a recent high-level security meeting chaired by Prime Minister Ahmet Davutoğlu. Security sources believe that (1) the PKK has learned from ISILS militants in Syria and (2) a number of PKK militants have participated in the U.S.-sponsored training of the Democratic Union Party (PYD) fighters. Although Washington denies the allegations, it is no secret that they had pushed for the inclusion of certain PKK operatives to be admitted into the train-and-equip program.
Last Update: Sep 21, 2015 2:09 am
RELATED TOPICS