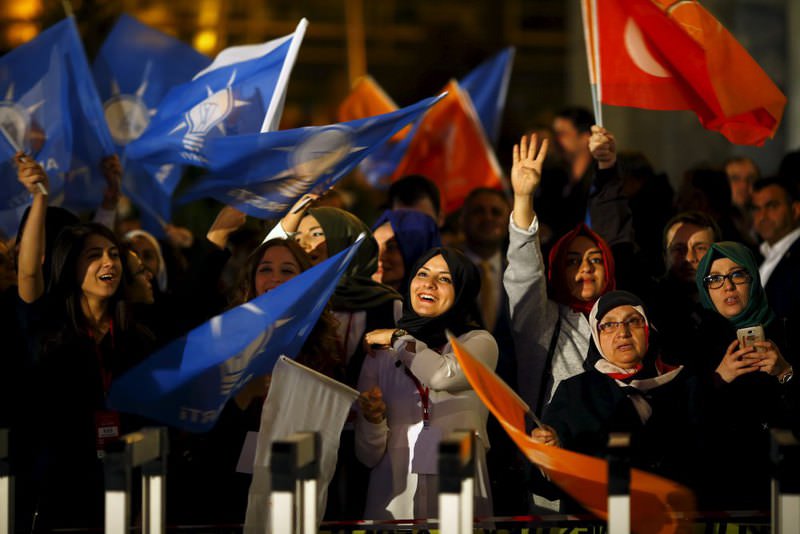 by Yahya Bostan
Nov 09, 2015 12:00 am
Over the past two years, Ankara wasted a lot of time and energy on domestic challenges. The turbulence started with the Gezi Park protests in May 2013 and continued with the Gülen Movement's attempt to overthrow the government under the pretext of a corruption probe. Most recently, Turkey has been the target of PKK and Islamic State of Iraq and al-Sham (ISIS) attacks. Once the shining star of the Middle East, the country has been unable to play a prominent role in the region, whose balance of power has since become more complex. Against the backdrop of domestic turmoil, a number of players revisited the terms of their engagement with Turkey - now a more fragile regional power.

For some time, the Justice and Development Party's (AK Party) government had started to look like a lame duck, as they say for U.S. presidents with no real power. To make matters worse, the June 7 parliamentary election denied the AK Party a parliamentary majority - which meant that the country would be ruled by a coalition government. Over the past couple of months, Turkey's international partners and adversaries have been following the political developments closely in order to see whether or not the AK Party would survive the turmoil. In the meantime, Iran adopted an aggressive foreign policy to hurt Turkish interests on the ground. When the Russian government stepped up its efforts to rescue the Assad regime, the Kremlin probably assumed that Turkey had been weakened by domestic challenges. It was hardly a secret that U.S. President Barack Obama hadn't been in touch with the Turkish leadership for quite some time. It was telling that the PKK suspended the withdrawal of armed militants from Turkey, to which they agreed in March 2013, when they witnessed how the Gezi Park protests derailed the government's progress.

Over the years, Israel followed the developments in Turkey more closely than most regional players. In truth, Ankara had downgraded its diplomatic relations with Tel Aviv over the 2010 raid on the Freedom Flotilla. To restore bilateral ties, Turkey demanded that the Israeli government issue a formal apology, offer compensation to the families of dead activists and lift the blockade of the Gaza Strip. On March 23, 2013, U.S. President Barack Obama persuaded Israeli Prime Minister Benjamin Netanyahu to meet the Turkish government's demands. The first step was taken on the same day, when Netanyahu called then-Prime Minister Recep Tayyip Erdoğan to apologize for his country's actions. Moving forward, some progress was made in the negotiations between Tel Aviv and the victims' families. Finally, the two governments found a middle ground, whereby Israel would allow humanitarian aid from Turkey to freely enter Gaza in exchange for Turkey softening its stance about the blockade. In other words, there was no reason left for Turkey and Israel to drag their heels. The bilateral talks, which started in 2013, proved inconclusive even though regional developments, including Tehran's expansionist foreign policy, forced Ankara and Tel Aviv to cooperate. If so, why can't the two countries make progress?

According to senior officials in Ankara, Turkey currently expects Israel to take a step toward reconciliation: When the Gezi Park protests broke out in 2013, the Israelis put dialogue with Ankara to the back burner to see how the episode would play out. If the AK Party lost power or was replaced by another movement, Tel Aviv wouldn't have to take any steps whatsoever to restore diplomatic ties with Turkey. As such, the June 7 parliamentary election was great news for Tel Aviv. Last week's vote, however, turned the tables on Israel: Receiving 49.4 percent of the vote, the AK Party ended the period of turmoil which started two years ago and made it possible for the next government to focus on long-term economic, political and foreign policy goals. At this time, Israel has no choice but to acknowledge and work with the AK Party leadership. A key message of the Nov. 1 election was that the electorate continued to support the AK Party's foreign policy and, provided that the region is getting more dangerous by the day, Tel Aviv cannot afford to wait another couple of years in the hope that the ruling party will lose some support. With the Iranian threat getting closer to Israel's border, it remains to be seen whether Tel Aviv will wait another four years to resolve its problems with Turkey.
Last Update: Nov 09, 2015 2:02 am