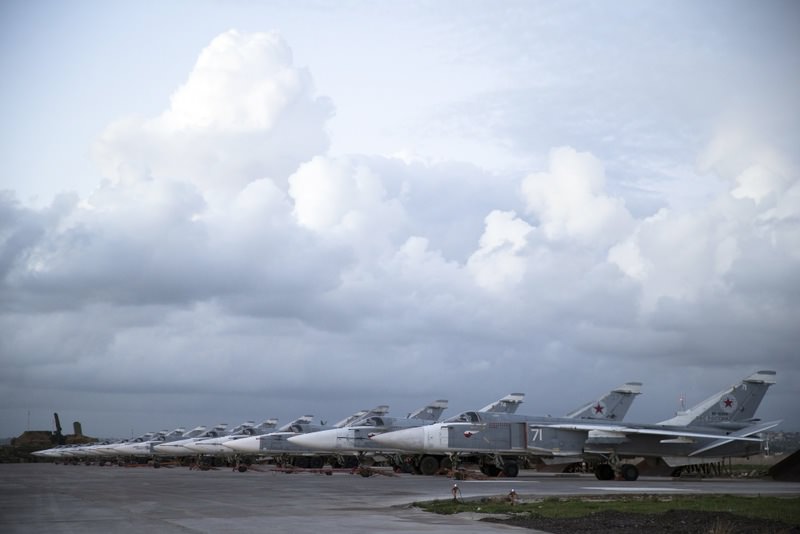 Iran asked for Russia's help in Syria, but is now having second thoughts on increasingly assertive Russian military presence, as evidenced by the Russian bombers at the Hemeimeem Air Base in Syria (Above).
by Yahya Bostan Mar 10, 2016 12:00 am

Russia started launching airstrikes in September 2015 to tip the scales in Syria. It was Iran, however, according to diplomatic circles in Ankara, that talked the Russians into interfering in the civil war.

According to the stories told in the backrooms of the Turkish capital, there came a point when the alliance of Iranian troops, Hezbollah militants, Shiite militias and Syrian regime forces were unable to stop the rebels. Having lost control over most of the country, Bashar Assad's regime was stuck in a small piece of land. As a last resort, Tehran reached out to Russia whose involvement, they thought, could change the course of the civil war.

Rumor has it that Iran called on the Kremlin to support the regime's campaign by launching airstrikes against their rivals. Assad could regain control over Syria if Russia cut the corridor between Turkey and rebel-held areas in the north. Once the Russian bases in Latakia were reinforced, they would attack the moderates in northwestern Syria, reclaim the territory between Aleppo and the Turkish border and push the moderates away from the border. Moving forward, the Iranians said, the regime would focus on moderates in Aleppo and elsewhere.

If Russia failed to act, Tehran reasoned, Assad, a Russian ally in the Middle East whose atrocities had been conveniently ignored by Iran and the Kremlin alike, would be removed from power.The rest, as they say, is history, as the Russian government accepted Iran's proposal to launch a comprehensive air war on the moderate rebels under the pretext of fighting DAESH. Next, they turned against the ethnic Turkmen minority near the Turkish border. Fearing Turkey's reaction, however, they stopped short of launching airstrikes further east until Turkey downed a Russian jet over an airspace violation in November.

The incident not only gave Russia the higher ground, but also prevented Turkey from launching operations in northern Syria. In response to the downing of the Su-24, the Kremlin directly targeted the supply routes between Turkey and Aleppo. By the time the cessation of hostilities entered into force, the Assad regime had been able to capture strategic targets in northern Aleppo.

When the Russian airstrikes began, many observers of international affairs wondered what was going to happen. At the time, I asked the same question to a senior analyst in Turkey's national security community who maintained that the Kremlin had just started a whole new ball game. "Moving forward, the situation in Syria might cause a rift between Russia and Iran," he said. For him to be right, Moscow and Tehran would need to start pursuing different goals.

Although Russia's interference in the Syrian civil war changed the ball game, Turkey's downing of a Russian jet meant that the Kremlin's game was no longer sustainable. Suffering an injury in Syria, Russia quickly turned its back on Iran's original plan and went rogue.

Following the jet incident, the Kremlin moved to improve its ties with the Democratic Union Party's (PYD) People's Protection Units (YPG) militia, which Ankara considers a terrorist organization, to anger Turkey by placing Syria's territorial integrity at risk. In a way, Russia started thinking along the same lines as the administration of U.S. President Barack Obama, which has been talking about a plan B in Syria. Meanwhile, Tehran has been sidelined and silently following the developments. According to Turkish sources, Iran is concerned that Russia, in cooperation with the United States, will seek to divide Syria. But officials say it remains unclear whether or not the most recent developments will drive a wedge between Iran and the Assad regime.
RELATED TOPICS