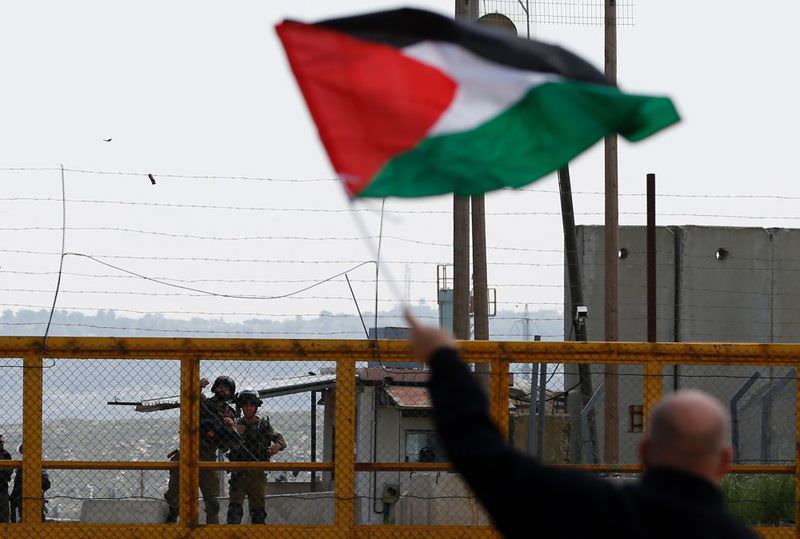 A Palestinian man waving his national flag in front of Israeli soldiers as they mark Land Day outside the compound of the Israeli-run prison in the Israeli occupied West Bank.
by Yahya Bostan Apr 11, 2016 12:00 am

Turkish-Israeli bilateral relations are likely to be reshaped in the coming days. Yet only few past and present hurdles still remain

During Prime Minister Ahmet Davutoğlu's most recent visit to the Finnish capital Helsinki, he sat down with a group of journalists, including myself, covering his trip. Most reporters were primarily interested in domestic politics and, more specifically, whether or not Davutoğlu and President Recep Tayyip Erdoğan had differences of opinion regarding renewed dialogue with the PKK leadership and the broader topic of counterterrorism. "There is not an inch between where myself and the president stand on fighting terrorism," he said. Others were interested in the ongoing negotiations between Turkey and Israel. When Mehmet Çelik, a correspondent for Daily Sabah, brought up reports in the Israeli media about an upcoming meeting between Turkish and Israeli officials, Davutoğlu said the two countries were making progress and an additional meeting would take place soon.

Upon returning to Turkey, we discovered that the highly anticipated meeting between Turkey and Israel had already happened. The Foreign Ministry issued a written statement to confirm that Undersecretary Feridun Sinirlioğlu had met with Israeli Prime Minister Benjamin Netanyahu's Special Envoy Joseph Ciechanover and Israeli National Security advisor Jacob Nagel in London. The ministry said that "the parties have made progress toward finalizing the agreement and addressing their differences and have resolved to conclude the agreement in their next meeting."

The announcement was quite important because the Turkish government had been quite secretive about the negotiations in recent months. In a way, the Foreign Ministry's statement made it clear that Turkey and Israel had reached a point of no return in the talks. But I still had some questions:

- Had Turkish and Israeli diplomats actually finalized the agreement but decided to hold an additional meeting to get the green light from their respective governments?

- When will the next meeting take place?

- Is it still possible for the next meeting to not yield results?

A senior government official with extensive knowledge of the negotiations provided the following answers:

Israel agreed to Turkey's conditions. In 2013, Netanyahu had offered a formal apology to then Prime Minister Erdoğan. Turkey and Israel have also agreed on the financial settlement that Israel is to offer to the families of the victims of the Mavi Marmara raid. The tentative number is around $20 million. Finally, Israel is not willing to entirely lift the Gaza blockade due to national security concerns. However, they came up with an arrangement that Turkey finds satisfactory, which would involve Israel easing the restrictions by allowing Turkey to ship humanitarian aid to Gaza.

The final hurdle in the negotiations relates to the Gaza blockade. Building on Israel's proposal, Erdoğan has specifically asked the energy crisis in Gaza be addressed as part of the negotiations. There is a crippling energy crisis going on right now that creates a number of challenges for ordinary people, including restricted access to clean water. Electricity is a basic need in the 21st century, and Turkey asked for this issue to be addressed, for which it offered to dispatch power ships – vessels capable of generating power – to the area. Our sense is that the Israel is not completely opposed to the idea, but they needed some time to think. Their concern seems to be that it will set a precedent. But they will have to respond to Turkey's request in the final meeting.

The final meeting between Turkey and Israel will take place within the next two weeks, which means that the two governments might strike a deal soon and enter a new period in their bilateral relations.

It is extremely unlikely for the final meeting to not produce any results. Neither side wants this to continue for much longer. If Israel agrees to Turkey sending a power ship to the Eastern Mediterranean, respective ambassadors will start serving in Ankara and Tel Aviv in no time.
Last Update: Apr 11, 2016 10:37 am
RELATED TOPICS