Turkey's next government: Harmony and syner﻿gy 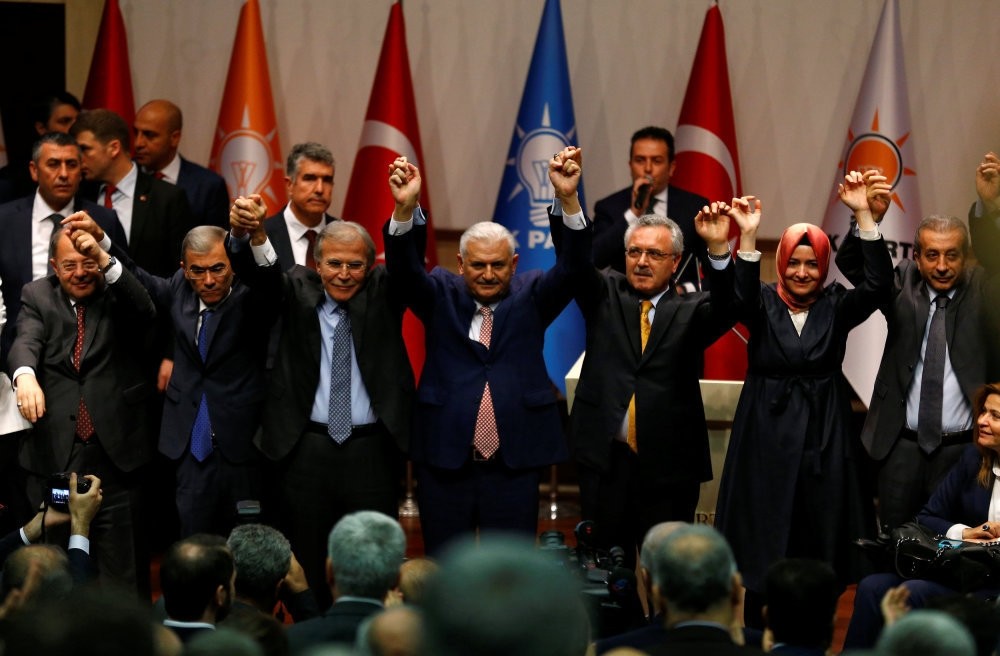 Under Binali Yu0131ldu0131ru0131m's (C) stewardship, the new government will try to tackle the terror threat while preparing a new constitution, attracting investors and trying to resolve the Syrian crisis.
by Yahya Bostan May 21, 2016 12:00 am

On Sunday, the ruling Justice and Development Party will elect Transportation Minister Binali Yıldırım as its next chairman and Turkey's next prime minister. In recent weeks, the country's largest political party experienced a leadership change due to the lack of harmony at the top levels of the Turkish government, where the presidency has recently assumed a more prominent role than in the past. During Ahmet Davutoğlu's tenure as prime minister, his office and the presidency found it difficult to coordinate their actions and agree on key issues. Since the inability of Turkey's political leaders to work together led to a waste of Turkey's time and energy, the ruling party took necessary steps to promote closer cooperation with the presidency.

Last month, the Justice and Development Party›s (AK Party) Executive Board moved to gain more control over the party machinery by assuming the power to appoint provincial leaders and others. In response, ChairmanDavutoğlu announced his resignation and called for an emergency congress to choose his successor, address pressing issues and reinvigorate the party.

To be clear, there won't be major differences between the agendas of the governments of Ahmet Davutoğlu and Binali Yıldırım. But it would appear that the next government will focus on strengthening the cooperation and coordination between various government agencies. As such, government officials will use the words harmony and synergy quite frequently.

Turkey's next government has four priorities:

The Turkish government will continue to combat terrorism. The appointment of new provincial governors and police commissioners, which was delayed by disagreements at the top levels of government, will presumably have a positive impact on security operations. Perhaps for the first time ever, Turkey's political leadership and security forces see eye to eye on the need to defeat the terrorists for good. Until the mission is accomplished, renewed dialogue with the PKK leadership will remain off the table.

Drafting Turkey's new constitution will be among the next government's priorities. At this point, it appears that the AK Party's next chairman is fully committed to the idea that presidentialism must be at the heart of the constitutional reform agenda. Provided that the country's major political parties are unable to reach a consensus over the new constitution and the distribution of seats at the Parliament makes it difficult to move forward, the AK Party might seek to create a temporary solution by amending the Constitution's article pertaining to the presidency's non-affiliation with parties. To amend the constitution, the ruling party will need to convince 14 members of other parties. If the Nationalist Movement Party (MHP) helps the government out, Turkey will hold a constitutional referendum in the foreseeable future.

The Syrian civil war will remain a priority item on the Turkish government's agenda. The crisis not only strengthens terrorist organizations at home but also represents a burden on Turkey's shoulders in the international arena. The next government will inevitably deal with domestic and global consequences of the bloody civil war next door. Moving forward, Turkey will seek to broker a political transition without Bashar Assad, stop the PKK's Syrian franchise from taking hold across the southern border and redouble its efforts to enforce the border with Syria and Iraq.

Finally, the government will take necessary steps to keep Turkey an attractive destination for foreign investors. To be clear, the AK Party will understandably select the right man to accomplish this task. At a time when the world economy is going through a difficult period, Turkey had been experiencing certain problems over key appointments and investment strategy behind closed doors. Since the Turkish people cannot afford to waste their time and energy on personal differences of opinion, their next government will do what is necessary to keep the economy going.
RELATED TOPICS