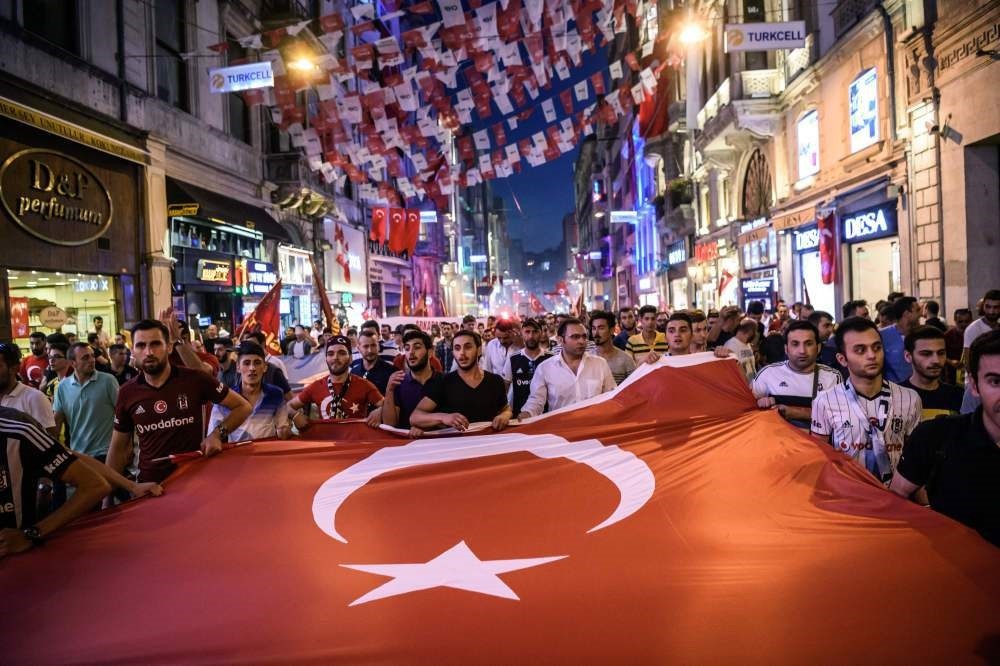 Turkish football supporters taking part in a rally against the failed coup attempt in Taksim Square, Istanbul on July 23.
by Yahya Bostan Jul 24, 2016 12:00 am

If the US continues to protect Gülen, the hypothesis suggesting that the US made Gülen plot the coup will be widely accepted among Turkish people

Turkey had a narrow escape. The military coup attempt, which would have trapped the country in darkness, has been warded off for the time being. To list the leading heroes who stood against the coup, we should first and foremost name the Turkish people, who took to the streets with flags in their hands against the armed coup plotters. The other heroes are President Recep Tayyip Erdoğan, who showed an exemplary determination and leadership, the security forces that defended democracy by risking their lives, the army officers that reacted against the coup plotters in the army and the opposition parties that behaved ethically.

The entire Turkish population is aware that this was an explicit coup attempt. All societal segments also agree that the terrorist organization headed by former Islamic cleric Fethullah Gülen, who currently resides in the U.S., is behind the attempt. Even those who have supported or sympathized with Gülen so far have withdrawn their support by admitting or realizing the fact. Daily Hürriyet columnist Taha Akyol can be listed among these names. As recent writings by Washington-based journalist Tolga Tanış indicate, representatives of some of Gülen's institutions resigned since they learned the fact. Also, journalist Eyüp Can Sağlık, one of the leading Gülenists who is also the husband of renowned writer Elif Şafak, blamed Gülenists for the incidents and wrote: "It is horrendous that a violent pro-coup mindset was unveiled in an organization that speaks highly of dialogue and tolerance. I condemn with all my being those who fired bullets on their people," which was a meaningful response.

Turkey is sure about Gülen's role in the coup attempt. However, when we have a dialogue with journalists based in Washington, we see that the U.S. capital is still confused. According to some sources, at some think-tank meetings, former diplomats and politicians do not allow anyone to speak ill of Gülen. Some even argue that the coup might have been plotted by Erdoğan, who aspires to discharge Gülen and consolidate his power. This is an interesting turning point for those who constantly blame the Turkish public for conspiracy.

It is obvious that there is a conspiracy. However, who plotted it poses a serious question mark.

Let me briefly explain. The fight against the Gülen organization, which infiltrated various state institutions in Turkey, has been ongoing for a long while. When the Gülenists turned the Ergenekon coup plot investigations into a discharge operation, the government fell out with the organization. Gülen-affiliated judicial officials who first targeted the seculars in Turkey turned against and targeted the government. The judicial coup attempt organized by a group of judges and prosecutors, whose ties with Gülen were revealed, was repelled on Dec. 17, 2013. Then a series of operations were kicked off against Gülenist elements infiltrated in the state.

These elements can be said to have been pacified in many institutions. A proceeding regarding Gülenists in the army was also being conducted, and at the Supreme Military Council meeting to be held Aug. 1-3, about 400 military officers whose ties with Gülen were revealed were going to be discharged from the Turkish Armed Forces (TSK). This meant that Gülen would completely lose his power in Turkey after this final move. So, Gülen pressed the button.

Besides, Gülenists announced what was coming on their social media accounts before the coup attempt. Tuncay Opçin, who played an influential role in the discharges conducted within the army during the Ergenekon case, wrote a tweet that targeted Erdoğan on July 14, a day before the coup attempt. "[They'll] raid [them] in their bed, hang them at dawn," the tweet said. Another Gülenist named Emre Uslu said he would purchase his ticket and return to Turkey in July 2016 when asked when he would return to Turkey. None of them is coincidental.

No one took these implications seriously as it was thought that staging a coup was no longer possible in Turkey. The FETÖ click infiltrated in the Turkish army took action on the evening of July 15. Parliament, the Police Department, and Intelligence Organization's headquarters were bombed. Civilians were attacked from air and land. Some 250 citizens, who did nothing but wave Turkish flags, were murdered in eight hours. President Erdoğan narrowly escaped an assassination attempt. The Chief of General Staff and the commanders-in-Chief of Armed Forces were arrested. Erol Olçak, a close friend and colleague of Erdoğan, was killed by the coup attempters. The brother of Erdoğan's chief adviser Mustafa Varank, Professor İlhan Varank, was also killed while resisting the coup.

When the soldiers attempting the coup took Chief of General Staff Gen. Hulusi Akar hostage, they told him that they would make him meet Gülen, whom they referred as "our opinion leader." During the coup attempt, a former police officer that was discharged from duty due to his Gülenist ties was also found in one of the tanks. Gülen's prayer notes were found on some apprehended pro-coup soldiers. In addition, many apprehended military officers confessed that they were affiliated with the Gülen organization.

The conjuncture, in other words, the operations against Gülenists, Gülenists' implications on social media, the recognition that some military officers would be discharged at the upcoming Supreme Military Council meeting and other additional developments pointed to Gülen as the usual suspect. However, some solid evidence, including pro-coup soldiers' words to Gen. Akar and Gülen's notes found on soldiers, indicate that Gülen is the number one suspect of the coup attempt.

The U.S., which refuses to extradite Gülen to Turkey, should honestly answer this question if they really think this is a conspiracy despite the solid evidence: Whose conspiracy is this? Do they still blame Erdoğan, who narrowly escaped an assassination attempt and opened himself a living space as the nation poured onto the streets? Or, is the U.S. to blame, which still protects Gülen although everyone considers him the number one suspect, including opposition parties, non-governmental organizations and media outlets?

As a journalist, I would like to convey the impression I had from the public: If the U.S. continues protecting Gülen, the hypothesis suggesting that the U.S. made Gülen plot the coup will be widely accepted among Turkish people.
Last Update: Jul 24, 2016 8:21 pm
RELATED TOPICS